When your ankles are tied together, you don't so much walk as shuffle. So when the man told me to walk forward, I hobbled to the end of the edge of the precipice and looked out on nothing — about 140 feet of nothing that ended in an impossibly blue river.

“Let go of the railing,” the voice behind me instructed.

I wasn't sure if I could let go. I was afraid I would lose my balance, especially as my ankles were tightly bound together.

That was an incongruous statement. After all, I was standing on the edge of Kawarau Bridge, the birthplace of bungee (or, in New Zealand, bunjy) jumping. I had come here to jump off the bridge, but now I was afraid of falling?

I made it happen and leaped out into nothing. I plummeted in the same way I would have if I had fallen, but where the idea of losing my balance scared me, the jump was exhilarating.

It was not the most frightening leap I had made in the last year, despite how big the jump from the Kawarau Bridge had been.

"I didn't sign the new contract," I told my wife.

She looked at me with an incomprehension that mirrored my own, "OK … What does that mean?"

“It means I don’t have a job anymore.”

My wife was surprised by this news, but no more than I was when I walked out of the office that evening, the contract unsigned and the deadline in the past. I had planned to sign it despite my reservations. Repeated negotiations haggled over the salary and bonus structure, but those factors were not my primary concern. I disapproved of the loss of control I was asked to accept. In the latter part of my career, I expected increased flexibility to be a reward for my decades of sacrifice. Moreover, I was unhappy with how a large corporation had taken over and managed the hospital from afar.

Despite my reservations, I expected to sign whatever my partners agreed on. After all, I didn't have anything else lined up. I didn't feel I had a lot of choices, and I wanted to support my associates. But when it came time to put the electronic signature to the online contract, I didn't do it. No fanfare, no drama, just quietly closed the page and left for the day. My career ended, not with a bang but with a whimper, and I fell into the unknown.

I didn't leave that practice because I had something better lined up. It wasn't that I was looking for greener pastures. It was that signing that contract felt like I was tacitly expressing approval of things I disapproved. I worried that doing so would compromise my values and make me less of a doctor and a person.

Losing your job is a frightening prospect, no matter how virtuous a spin you try to put on it. I suffered through many sleepless nights over the subsequent weeks. But there was one important distinction: I hadn't fallen. I had jumped.

I began a new round of talks with management in the hopes of reaching an arrangement that I found acceptable. It immediately became clear they were not negotiating in good faith. Instead, they were stringing me along until they figured out how to replace me. So I played my part in the corporate charade to buy time while exploring my options.

I looked into joining a private group where my skills in endoscopy and my colorectal expertise would be an asset, but that practice was in the midst of its own struggles. I pursued locum work and found a huge demand for someone of my diversified skill set. I enjoyed the locum experience, the challenge of working in new places, and the feeling of being valued and appreciated. I did not like being away from my family.

There was a third option I was slow to pursue. It was the one that intrigued me most, but it seemed too big and bold a move. Too giant a leap. So for months, I shied away from what I most wanted to try: working abroad.

Working abroad was an ambition my wife and I had talked about for years. We got the idea while visiting Australia, but the place we most wanted to live was New Zealand. That laid-back country offers everything a nature lover and amateur photographer like me could wish for; mountains, oceans, glaciers, Maori culture, fjords, unique wildlife, tropical islands, you name it. But the health care organization I worked in had repeatedly denied my request to take a sabbatical. Well, they no longer had any say in the issue. The only person keeping me from pursuing working overseas was me. So I leaped. And I landed in a job.

It still seems strange that I stepped into the hospital on Day One as a Senior Medical Officer. Still, more than the title, I like all the privileges, perks, and pay commensurate with my "Senior" status. I was pleased to learn that although I had never worked in New Zealand, they afforded me all the benefits of my 20-plus years as a practicing general surgeon. Whereas I had been afraid that when I took a new full-time position, I would have to start at the bottom, I am getting better working conditions, holidays, vacation time, and other benefits than I would ever have received in the U.S. And for a father whose three teens will soon be leaving home, that time is far more valuable to me than what I am giving up in income. In short, I got exactly the deal I had tried to negotiate for in the contract I never signed.

Leaving my job was vertiginous. The months after felt like falling out of control. But the faith I put in myself paid off. I looked into the face of my fear and didn't shy away. Instead, I chose to step forward into growth rather than backward into safety. My fear had let me know which way I needed to go. In both bungee jumping and my career, I chose to move forward toward what scared me most, and that choice has made all the difference.

Will working in New Zealand prove to be a panacea or a blunder? It's too soon to tell, but I suspect it will be a little of both, like most of life. But I know one thing; I would have been a lesser person if I had allowed my fear to frighten me into signing that contract. So no matter how this all turns out, I can be sure that I will be a stronger person in the future. That is enough for me.

Oh, and if I hadn't come to New Zealand, I would have never jumped from the Kawarau Bridge, and that would have been a shame. 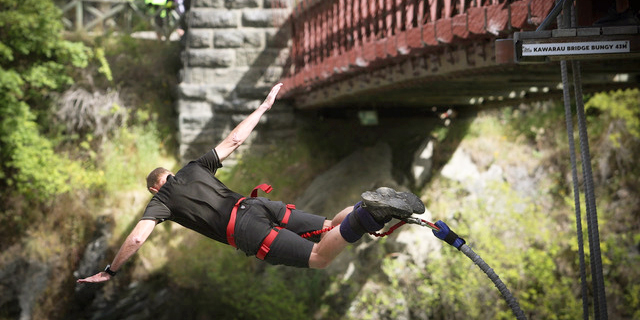 What's a leap of faith you've made in life? Share your fallings, failings, and landings in the comments.