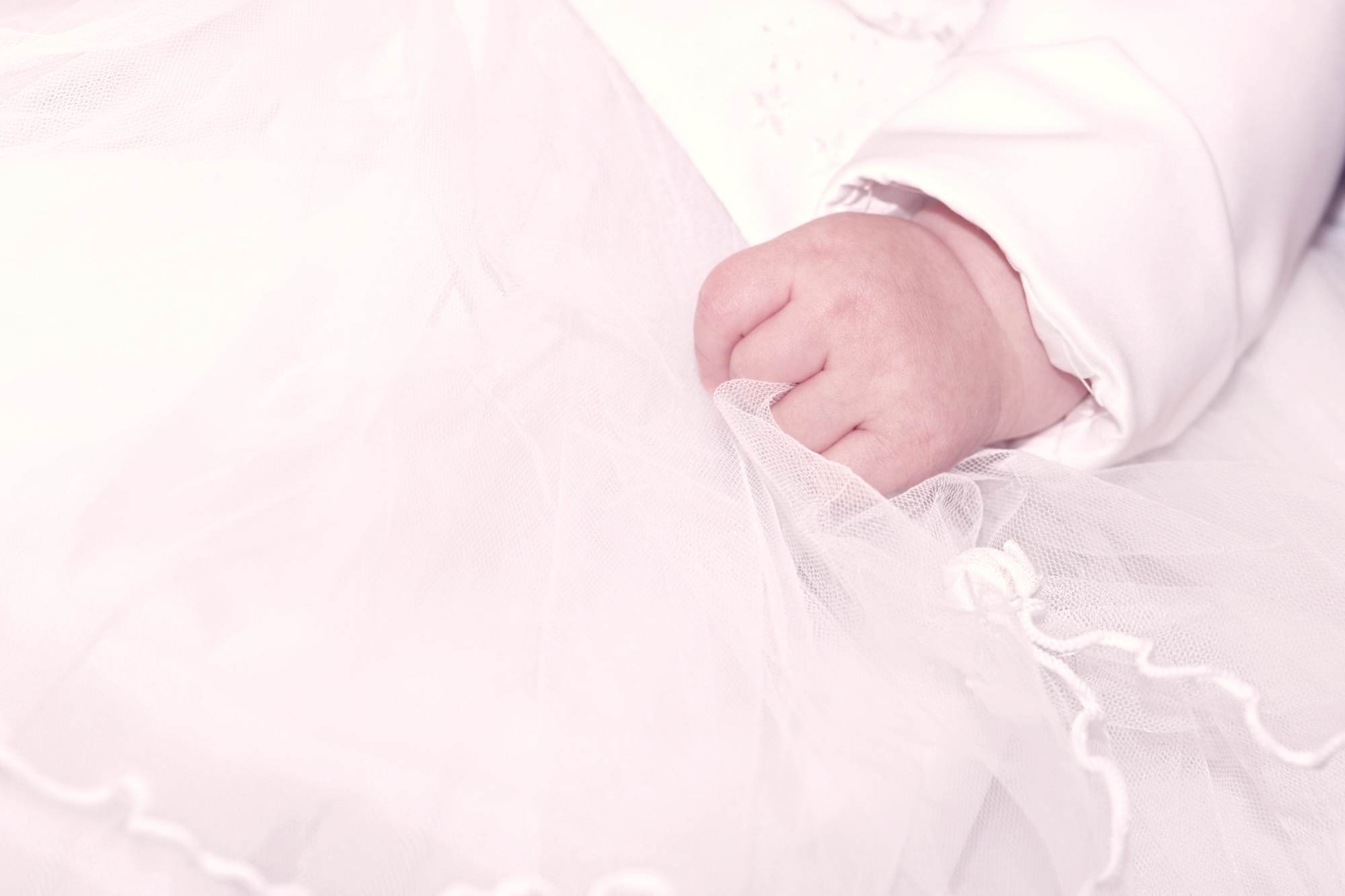 The sun shines through the hospital room. Vitals track on the monitor. Hailey lies sedate in the middle of a white, metal crib surrounded by parents, her older sister, and her grandmother. Only a curtain separates this scene from the busy pediatric intensive care unit (PICU) outside. This is not a typical baby dedication.

Baby dedications are a part of the Protestant religious tradition. Families come out in full force to watch their newest member presented in front of the church. The pastor prays for the baby’s future, and the support of the parents, family, and friends. The audience “oohs” and “ahhs.” In especially traditional ceremonies, the infant wears a white suit or dress.

In the hospital room, Hailey is wearing a pink dress for the occasion.

“Her aunt made it for her,” her mother boasts. She chuckles at the stain on the left side. “Drainage from her G-tube,” she explains. At 15 months, Hailey is older than most babies at their dedication, but the day her parents selected – today – has significance.

Hailey has a rare genetic condition that has required 15 hospital admissions during her short life, mostly for respiratory illnesses. Hailey has almost died seven times. This hospital stay, her most recent, has been longer and more severe than previous visits. She was in severe respiratory failure secondary to a common virus and could not wean from the ventilator. Her parents were given three options: attempt extubation again, proceed with a trach, or withdraw care.

“I just don’t want her to suffer,” her mother said. She was at Hailey’s bedside every day and did not want her be stuck in a hospital for life. She watched her daughter receive CPR and saw the rib fracture appear on the chest x-rays. She watched providers have to re-intubate Hailey in the middle of the night after a seizure. Her parents elected to forego compressions if she arrested again. Hailey’s mother wasn’t sure how much more Hailey could take. But, Hailey’s mother also had an infectious positivity as she reflected on all the challenges Hailey had faced and overcome. “I measure miracles in small increments,” she said. Hailey’s father, who works hours away from the hospital, was afraid to lose his little girl. He had seen her get better so many times before and wanted to believe she would do so again.

Hailey’s room provided solace for me from the constant buzz of the PICU. Every afternoon, I sat next to Hailey’s mother by the window. We talked about various things, from music to overcoming fear. She shared her struggle to make the best choice for Hailey given the uncertainty of what would happen next.

“If this was your daughter, what would you do?” she asked.

I couldn’t answer. I could never decide what was best for Hailey and her family, but I could give them the knowledge they needed to make an informed decision. Our team arranged conversations with pulmonologists, ENT surgeons, respiratory therapists, and home care nurses to help Hailey’s family picture life with a tracheostomy. With the help of a social worker, Hailey’s mom met with another family whose child had a trach.

“That mom taught me that it's not about having the best quality of life, but making the best of what we have.”

After much deliberation, Hailey’s parents decided to proceed with trach surgery. They wanted to send her off with a meaningful ceremony.

“We’re going to do a baby dedication for Hailey,” they told me. “We would love for you to come.”

As soon as my rounds ended, Hailey’s bedside nurse and I slipped behind the curtain and settled into a corner of the room. A hospital chaplain read from a prepared script. She opened the parents’ Bible and read their selected verse: For I know the plans I have for you, declares the Lord, plans to prosper you and not to harm you, plans to give you hope and a future. (Jeremiah 29:11) The chaplain led a dedication prayer and placed a dab of oil on Hailey’s head. A volunteer photographer coached the family through poses. Hailey’s family crouched to get as close as they could; they stroked her hair and held her hand.

Those precious hours before surgery felt like a celebration: a family united and a baby entrusted in God’s hands. Even without the usual church setting, the symbolism shone through. Their joy made the sterile, white background of the hospital room fade away.

Hailey’s dedication ceremony, in particular, symbolized the importance of letting go. Her parents chose to trust that she would make it through surgery — and whatever else life with a tracheostomy would include.

More than a month later, Hailey was sitting up in her father’s lap as her older sister played on the hospital floor beside her. They were preparing to leave, to move home. “We made the right choice for us,” her mom said. “She’s still Hailey.”

Dr. Rebekah Fenton is a third year Pediatrics resident at Seattle Children’s Hospital/University of Washington. She is passionate about empowering vulnerable youth populations and uses stories to increase awareness and empathy of patients’ and families’ experiences. This essay is a written account of true events and was published with the patient’s family’s permission. The patient’s name has been changed in the interest of confidentiality.