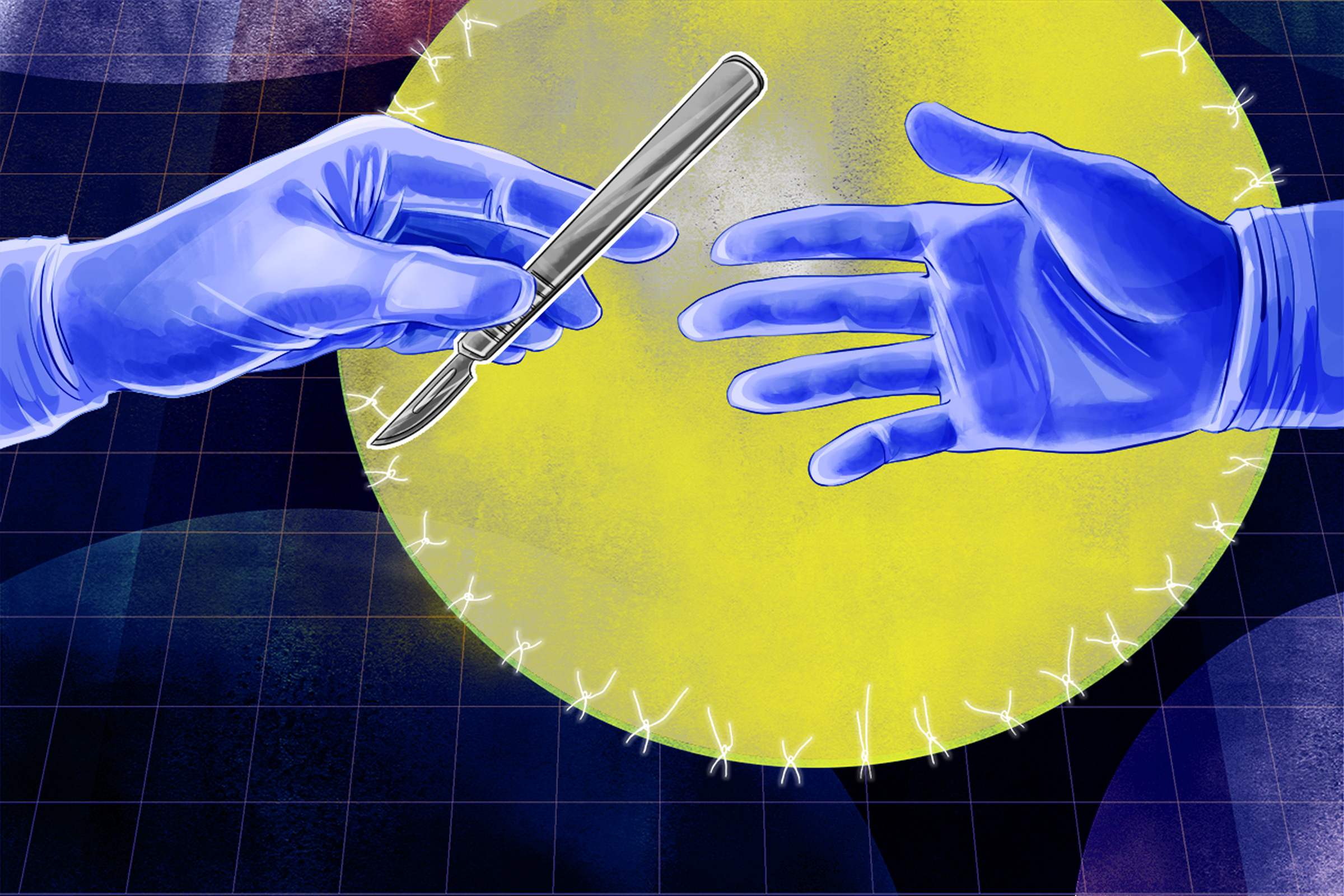 After a wintry surgical rotation spent mostly inside the operating room, I found myself at an art museum staring at Lucio Fontana’s Spatial Concept: Expectations. A particular piece corralled my attention: a massive, red-soaked canvas, with a single midline slash. The artist’s goal, according to his manifesto, was to call upon “the world of science” to “commence the development of four-dimensional art.” Fontana sought to achieve this by intentionally injuring the flesh of the canvas; accordingly, his work demands inquiry into its own dimensionality.

As I stood in the gallery, I imagined suturing the canvas back together, wondering if the edges were friable, and even considering the aesthetics of a graft. Had Fontana used a scalpel? A raspy throat-clearing interrupted my reverie; a small line had queued behind me. My pondering was rather obstructive to everyone else’s view, meriting pointed ahems from strangers. I apologetically stepped aside, the blood-red color blazing behind my eyelids.

At the beginning of each operation, the surgeon must injure. As Fontana sought dimensionality via an incisional approach to the canvas, so does the surgeon by cutting. Surgeons exclusively and directly touch and modify disease. In one particular surgery — a laparoscopic distal gastrectomy — I began to understand the gravity inherent in this form of healing.

“Incision?” the circulating nurse looked up from his sluggish computer. This game of telephone had not yet ceased to amuse me.

Trocars and probes roved the peritoneal cavity. As the dissection deepened, it became apparent that the patient’s tumor had spread since her last CT scan. The surgery would need to become a total gastrectomy with additional resection of the colon at the splenic flexure; the stomach and colon were adhered by metastatic disease.

“Ten blade,” the resident extended a palm for the scalpel once more.

The abdomen parted easily in a choreographed dance of lap pads, cautery, and retractors until the portal was obtained. The attending swiftly summoned a colorectal surgeon to extract the affected bowel. Once the surgeon left, the attending turned to me.

“She’s so young,” the attending said. “I thought I would fix her.” The attending resumed her position by the patient. “Now, this is only palliative.” She calmly continued her resection, while I, deltoids shaking, held the camera steady. Just a few hours prior, I had been steadying the patient’s hand while nervous tears flowed down her cheeks in pre-op.

“Specimen,” the resident mumbled into her mask.

“Specimen, stomach,” the attending echoed, passing the deflated stomach to me.

“Specimen, stomach,” the scrub tech declared, as they placed it into a jar.

The patient woke without complication. That evening, as I conducted her post-operative check, she inquired about the incisions.

“Did they have to take more?” she asked. I was caught off-guard. I felt uneasy, unsure where the boundary was as a medical student for conveying this information.

“Yes, and the margins were negative,” I smiled. “You did an amazing job; we will move you to a room tonight.”

I texted the PGY-4 saying the post-op check was normal, expressing that the patient had not yet been informed of the conversion of operation. Technically, the resident responded back, it was still laparoscopic.

After the weekend, I was again examining the patient’s abdomen, this time at 5:30 a.m.

“When can I eat?” the patient asked.

My mind flittered back to the post-op instructions I had received from the resident. PCA, no Toradol. Ancef + Flagyl 24h. PPI. Foley. JP to gravity. Labs now and in AM. NPO forever.

“I’m not sure,” I told her. We had literally removed this woman’s entire stomach. “Has anyone explained the operation you received yet?”

She shook her head, running a finger along the incision, subxiphoid to supraumbilical.

“OK, let’s walk through these incisions together,” I said. We reviewed the camera port and probe placements first, finally arriving at the midline. “And this is where your stomach came out, and a small piece of your intestine as well.” I took her hand. “We realized that the tumor had spread, so extra was taken out — most of your stomach and five inches of your colon. Remember what we talked about last time, though? The margins were negative. This is why you can’t eat yet; it’ll take time for your digestion to restart.”

Another question to which I had no concrete answer. I recalled the attending’s voice. This is only palliative.

“Your obstructive symptoms – constipation, nausea – should improve. But you’ll be followed closely for your other treatments. As a student, I’m not sure what that entails.”

“Okay,” she sighed. “I don’t mind that they took extra, as long as I’m better.” She squeezed my hand.

In the days following, her diaphoresis and diarrhea all fit the vasomotor picture of dumping syndrome. I was able to continue to explain her experience in the context of the operation, a method that seemed to placate her. Though happy to do it, I couldn’t shake my discomfort. Had I been under the knife, had another surgeon been required to remove more of my viscera, I would want a prompt explanation, preferably directly from the surgeon.

Postoperatively, the incision is often where patients complain of feeling the most pain; it is their only real souvenir of the operation. After all, skin is dense with sensory innervation, and the aftermath of the closure – staples, sutures, ecchymosis – is a bright visual reminder of both the injury and healing that ensues. But, as we know from Fontana, the full picture is not a superficial array of speckled bruises and patches of gauze. Simultaneously violent and restorative, surgery affords an unrivaled vantage into disease — a vantage that remains obscured for the patient if not appropriately explicated by the physician. Thus, unlike Spatial Concept, surgeons must provide essential closure. The depth of this closure far transcends the bounds of the abdominal canvas.

Vibhu Krishna is originally from Cleveland and double-majored in Studio Art and Medicine, Health & Society (highest honors) at Vanderbilt University. She currently attends medical school at Columbia University and finds great joy in understanding the art of medicine interdisciplinarily.