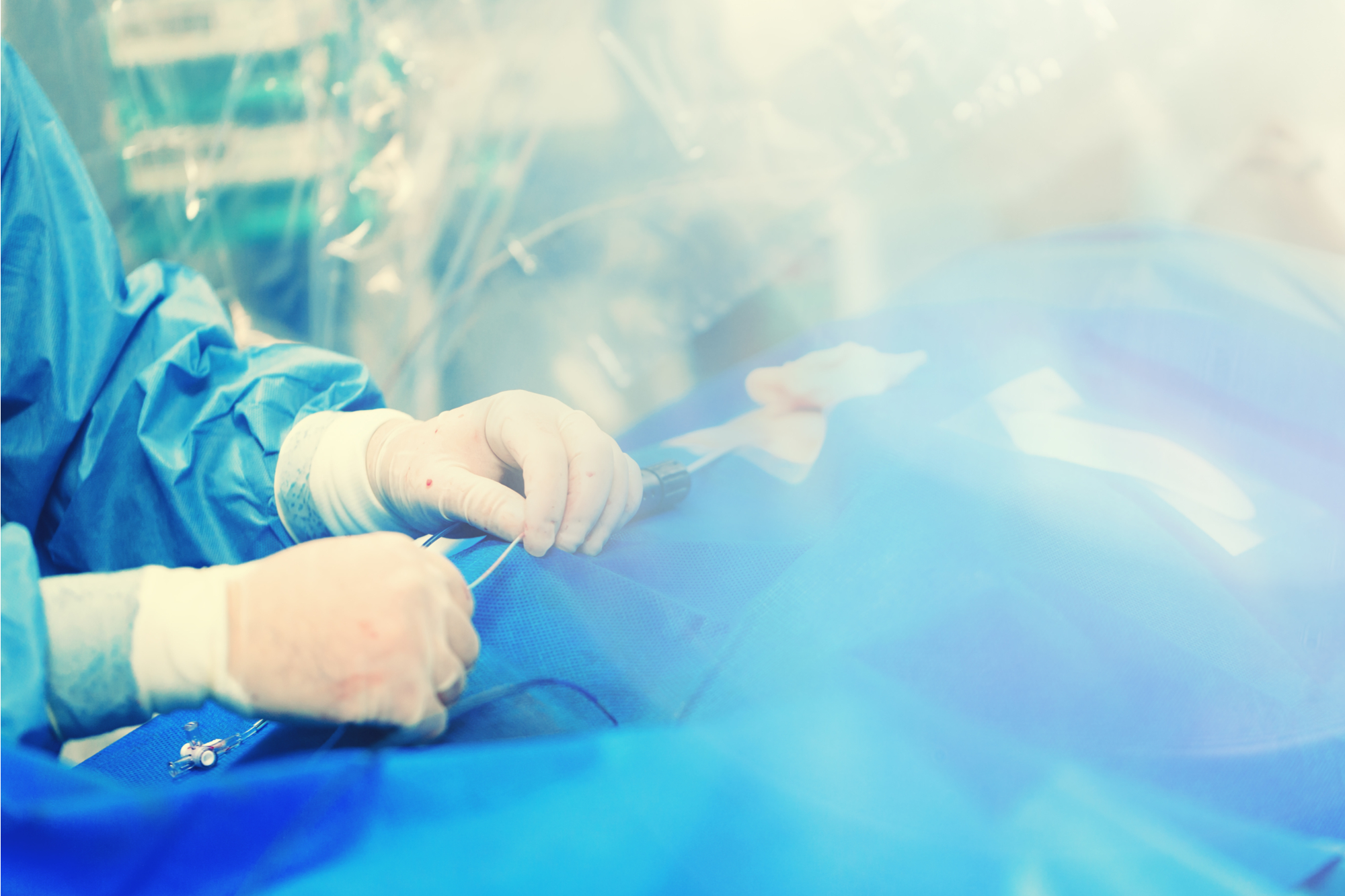 The pathogenesis of this ongoing annual hazard is thought to be the common presence of a metallic implant that contorts and constrains the vessel, limits vasomotion and positive adaptive remodeling, and serves as a persistent nidus for chronic inflammation, neoatherosclerosis, or thrombosis. The Absorb BVS was designed to provide early drug delivery and mechanical support similar to metallic DES followed by complete resorption in approximately three years with recovery of vascular structure and function.

What Does the Evidence Say?

Thus, beyond the point of complete device resorption lies the promise of improved clinical outcomes from “leaving nothing behind” compared to metallic DES. The ABSORB III trial demonstrated non-inferior rates of target lesion failure (TLF: cardiac death target vessel myocardial infarction [TVMI] or ischemia-driven target lesion revascularization [ID-TLR]) at one year with BVS compared with EES. Between 1 and 3 years, and cumulative to 3 years, adverse event rates (particularly TVMI and device thrombosis [DT]) were increased after BVS.

As BVS remains physically present for approximately three years, longer-term clinical follow-up is required to determine if a differential rate of adverse clinical events will occur following this time point. In this context, five year clinical outcomes following treatment with BVS versus EES from the pivotal ABSORB III trial were presented as well as patient-level pooled data from four randomized controlled clinical trials comparing BVS with EES. Clinical events by randomized device cumulative to five years as well as between 0–3 and 3–5 years were reported at TCT 2019. The pivotal ABSORB III trial included 2008 randomized patients and the pooled analysis of four trials included 3,384 total randomized patients.

The major finding of both analyses was that while adverse clinical outcomes through five years were increased with BVS compared with EES (especially with regards to safety events of TVMI and DT), device-oriented events (particularly TLF and DT) varied in both their annualized and relative frequency beyond the three year time point. Before the three year landmark, adverse event rates were increased with BVS compared to EES with time to event curves diverging over time. After the three year landmark, excess risk was no longer apparent with BVS and the point estimates actually favored BVS (compared with EES). The abrupt shift in slope of the time-to-event curves (and their relative hazards) for both TLF and DT was coincident with the time point of complete BVS resorption (Figures 1, 2). 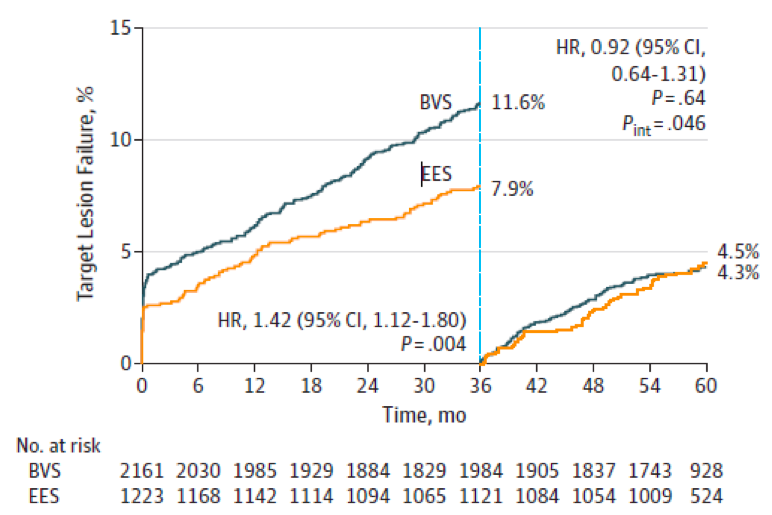 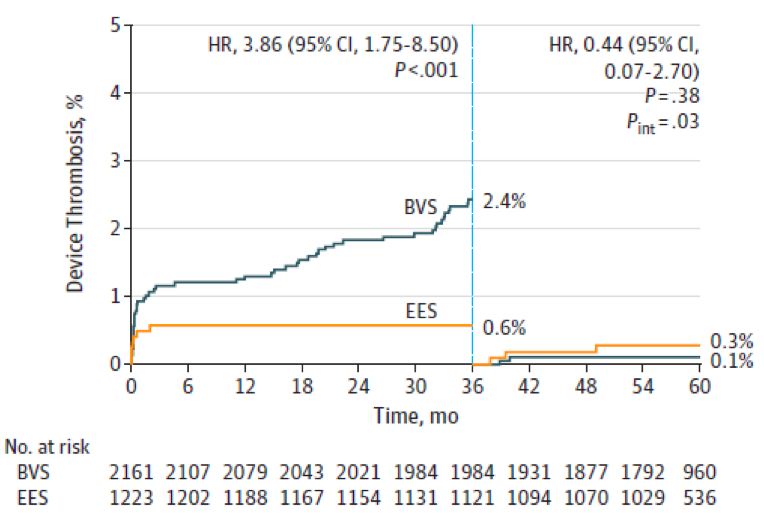 In this regard, longer-term follow-up (5–15 years) of metallic coronary stent platforms have demonstrated relatively consistent annualized event rates beyond the first year following deployment, which are thought to reflect the persistent presence of a metallic prosthesis which prevents adaptive positive remodeling and serves as nidus for chronic inflammation and/or strut fracture with the consequent occurrence of very late thrombosis and/or restenosis. The differential rates for occurrence of TLF and DT for each respective time period (0–3 vs. 3–5 years) by randomized device for each of the TCT 2019 presentations is shown in Table 1.

The increased risk associated with BVS within three years of implantation has been attributed to the thick struts of this first-generation device (150µ), suboptimal mechanical properties, including risk of fracture with overexpansion, suboptimal device implantation technique not optimized or standardized in these trials, and a unique late failure mode during resorption known as “intraluminal scaffold dismantling.” Following resorption (about three years) the point estimates and hazard ratios for TLF and DT favor BVS. Unfortunately, longer-term clinical follow-up (beyond five years) is not planned and thus, the stability of the observed point estimates and relative hazards cannot be determined and precludes the prediction of equipoise or even relative “net benefit” attributable to BVS (vs. EES).

Is There Room For Improvement?

However, these new observations may prompt renewed interest in “re-engineered” bioresorbable scaffolds designed to mitigate “early hazard” so that “late benefit” may be achieved. Many of these contributing issues may be overcome by improvements in device design with thinner struts, polymer processing, earlier resorption and improved deployment technique. Thus, although the rates of adverse ischemic events cumulative through five years were increased with the first-generation BVS compared with EES, the period of excess risk ended at three years. These new reports provide mechanistic insights into the timing of adverse events after BVS and identify challenges to be overcome for BVS technology to provide enhanced patient benefit. Specifically, if new generation bioresorbable scaffolds can be demonstrated to have results comparable to metallic DES during the phase of active bioresorption, they may offer an acceptable alternative to metallic DES for many patients with coronary artery disease.