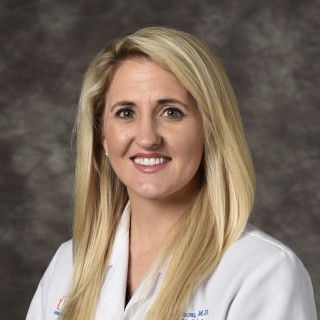 My infertility journey started last year at FIX — the FemInEM Idea Exchange (a conference geared towards female physicians in Emergency Medicine)– as I sat in a hotel room with another emergency medicine physician and a bottle of champagne, celebrating the beginning of my injections. My journey was not the typical journey of infertility. I hadn’t spent years trying. My husband had two daughters and a vasectomy. Our doctors recommended against a reversal, leaving IVF as our only option. We went through extensive blood work and testing. They diagnosed me with diminished ovarian reserve and recommended surgery for endometriosis. But being a doctor, I was convinced nothing was wrong with me.

So we started our IVF round. I went for my egg harvest and emerged from my propofol haze to find out I had 8 eggs. Only 8. The downhill spiral started before the propofol had worn off. What if I do have a problem? What if I have diminished ovarian reserve or endometriosis? Should I have had the surgery? What if I can never have a child? All of these questions started running through my head as I waited 5 long days for my transfer to occur. The next day they called me to tell me only 5 of the embryos had fertilized. The self-loathing talk in my head was going a million miles an hour — I obviously did something wrong.

On our transfer date, we were (trying to be) ecstatic. It was October and we were “going to put a pumpkin in my belly”. As I said, our plan was for two embryos, until we went in to the office and found out we in fact ONLY had two embryos. There were two other embryos that were in morula phase, which might progress to blastocyst. We thought, “Okay we have two, we will have two more. Those will grow. Let’s put in two.” And we did.

I spent hours that day laying on the floor, my legs propped up against the wall, trying to force these two embryos to make a home in my uterus. I was constantly wondering what I had done wrong. I questioned why we only had 8 eggs. Why did only two make it to blastocyst phase? Maybe the doctor was right. Maybe I was WRONG. Maybe I have my own reproductive problems. Maybe I had managed to get to 31 without ever having a pregnancy scare because I am infertile.

Monday morning, I emailed my nurse to call me with results about my two still-growing embryos. She didn’t call. She emailed, “No frozen embryos :( “ Sad face — like the one with the colon and the parentheses — yes that. Breaking bad news is always a challenge. I break bad news to someone almost EVERY shift in the ER. An email with a sad face to a woman jacked up on hormones is NOT a great option. The downward spiral became hurricane force at that point. The two embryos inside me were my only chance of getting pregnant. Fifteen THOUSAND dollars for one chance, and a 60% chance of success at that.

I was supposed to have my beta quant pregnancy test while I was at ACEP, the biggest Emergency Medicine conference of the year. We waited until we returned home. Our home pregnancy test was positive. We were overjoyed, for a short time. The next day my blood quant came back. 49. My nurse called and explained that it was lower than they would expect for a 9-day quant, and this was day 11. I knew that something was wrong. I agreed to a 48-hour repeat. The next day, I started bleeding. I spent every free minute of my overnight shift looking up infertility issues — endometriosis, surgical cure rate, diminished ovarian reserve, fresh vs frozen transfers. I accepted that this pregnancy was not going to be viable and I started equipping myself with the knowledge I needed to make the next step decisions. Two days later, my repeat quant was 98. EXACTLY doubled. I was still bleeding. My nurse called again — wanted to know if I want to keep repeating beta quants every two days or just wait for my 6 week US. I immediately refused — I did not want to be the patient I see in the ER getting repeat quants. I didn’t want to be the patient at all. I did the math. I doubled out my beta quant and agreed to the 6-week US.

At six weeks, we went in for the ultrasound. I started having nausea. I was peeing every hour and drinking water by the gallon. I had started to FEEL pregnant. And that downward spiral of negativity in my head had finally quieted. I allowed myself to believe I may be pregnant. I was not 100% convinced, but emotionally it was the highest I’d been in a month. A young blonde female doctor I had never met before came in to do my ultrasound and reviewed my history. As soon as the trans-vaginal probe went in, I saw the clear stripe of my uterus uninterrupted by any collections of fluid. It was utterly empty. Immediately, the tears crept into the corners of my eyes. I had an ectopic — that thing I am always eager to rule out in patients. She scanned my adnexa, and there it was — a gestational sac, with a yolk sac, no fetal pole, no heartbeat. My doctor looked at me and said the most honest thing she can, “I am so sorry. You probably diagnose these way more than I do. It’s extremely rare with IVF, less than 1%.” Yes, I do diagnose them more than she does. And yes, I am in the 1%.

Dr. Melissa Parsons is an assistant professor of Emergency Medicine at the University of Florida College of Medicine- Jacksonville in Jacksonville, FL. She earned her medical degree from University of Florida in Gainesville and completed her residency at UF-Jacksonville. Her academic interests focus on medical student and resident education through simulation, resident wellness, and addressing gender disparities in the workplace. Her personal interest consist of fishing, lobstering and hunting in her spare time.

Read The Power of A Touch of Humanity

The Power of A Touch of Humanity

How Efficient Is U.S. Healthcare Really?

May 23, 2019 Link to This Free App Easily Tracks Symptoms of Rheumatoid Arthritis