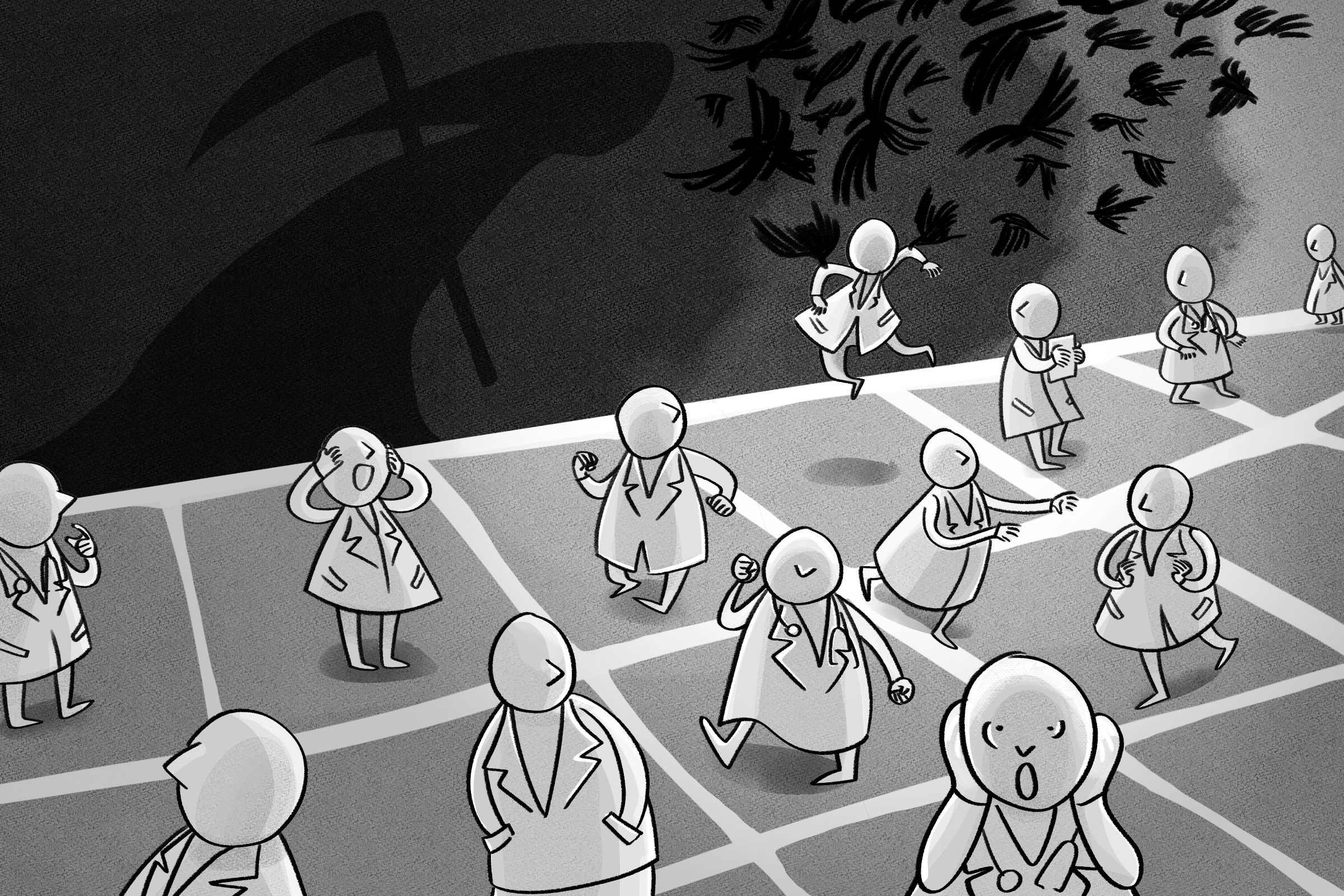 After rounding on my patients at the hospital, I headed to the doctors’ lounge. I was looking forward to a little break before heading to my pediatric practice and its usual miasma of barely controlled frenzy. The doctors’ lounge was a quiet haven of comfortable furniture, several of the day’s newspapers, a large flat-screen TV, and a well-stocked fridge and pantry. The lounge is a safe place where doctors can relax during their busy days.

While in the lounge, I overheard a conversation between two physicians. They were commenting on the deaths of several patients from the flu, which claimed many lives in our community that winter.

“Oh, well. Gotta thin the herd, right?” one of them asked, with a hint of a smile.

“Right,” the other agreed. They said goodbye and left.

These remarks elicited a profound, visceral, and negative response from me that I struggled to process. Why did their remarks bother me so much? Surely, such gallows humor has been an accepted part of medicine for a long time — accepted, at least, among medicine’s practitioners if not its patients.

But just because a tradition is accepted doesn’t mean it’s right. Gallows humor has often been defended as a way for health care workers to cope with the misery, pain, and death they deal with. Nurses, aides, emergency medical technicians, therapists, and others, along with doctors, have all been guilty of using dark humor similar to what I overheard in the lounge. “You gotta laugh or cry,” is a common refrain in our work, and most people prefer to laugh.

But is such joking ethical? There are plenty of opinions on this subject but little formal research. So, I looked to the medical literature for answers. I found a thorough analysis of the subject in a 2011 paper by Katie Watson, an assistant professor in the Medical Humanities and Bioethics program at the Northwestern University Feinberg School of Medicine. Watson notes that there are many reasons for gallows humor, most of them ethically justifiable. For example, it promotes community among health care providers, acts as a way to deal with the cognitive or emotional stress of the job, and can even provide a unique connection to patients when used properly. It becomes unethical, according to Watson, when humor is used in the abuse of a patient, or as an abuse of trust or power.

But “abuse” in those situations can be defined in a variety of ways. We pediatricians almost never joke about dying patients. For us, a death is an abomination, a failure on our part. But for adult providers, such as the two doctors I overheard in the lounge, death is a frequent visitor. Some of my colleagues in internal medicine lose patients every week, often after living long, full lives.

So was the comment I overheard unethical? I guess not, based on Watson’s criteria. The remark didn’t abuse any specific patient or demographic group of patients, and it was made far from patients’ and families’ ears. I’m sure the physicians provided excellent care for the patients who died, so there was no reason to suspect abuse of trust or power. In fact, the butt of the joke seemed to be the frailty and mortality to which we all succumb, rather than the frailty and mortality of the dead patients specifically.

But the comment still bothered me. After thinking about it, I realized that I was uncomfortable with the remark because I heard it as an outsider. Yes, I’m a doctor, but my patients aren’t supposed to die; I’m not part of that physician community who cares for the elderly. I heard that comment as a patient would hear it — and I realized that the powerful emotion I was experiencing was shame. I was ashamed because I have most certainly made similar remarks, and on more than one occasion. If a patient or family member overhead me making a remark like that, would they recoil as I did? Would they think me a monster?

I guess that’s why Watson states that one of the hallmarks of ethical gallows humor is that it is presented in private, never in front of patients or their families. In fact, she applauds such humor as a way to process disturbing events and move past them so that physicians are better able to handle the next patient or next crisis. Watson also warns that too much dark humor may be a sign that a physician is unable to use other coping mechanisms, such as an honest discussion of emotions. An open discussion of a horrific event can be difficult, even painful, and it forces us to truly grapple with confusing, conflicting, and potent emotions. A joke, on the other hand, simply dismisses a problem completely. That may be helpful in an emergency room when you have to move on to the next patient quickly. But how many times after employing gallows humor do we return to engage in a true analysis of our thoughts and emotions? Personally, I contemplate these issues on my own, but communally, I suspect it happens less frequently.

A sense of humor is part of what makes us human and, in my opinion, so is the need to laugh. But taste in humor is variable. What makes me laugh may not only fail to amuse you, it may offend you. Finding common ground in humor can be difficult. And maybe that’s the takeaway from that moment in the doctors’ lounge: we all need to find refuge in humor sometimes, and as long as we do so in a safe space and take care not to make the patient the butt of the joke, then it’s an important safety valve to release the pressures of our profession.

That said, we must take care. We must remember to also consider other, more sophisticated coping mechanisms for processing our emotions (e.g., therapy, informal discussions with our peers, or even discussions on online forums such as Doximity). I’m often the first to use humor in difficult situations — because it’s quick and easy. But ultimately, it’s a poor substitute for more nuanced processing and, for me personally, I need to practice more.

How do you cope with the pressures of your professional practice? Share in the comments below.