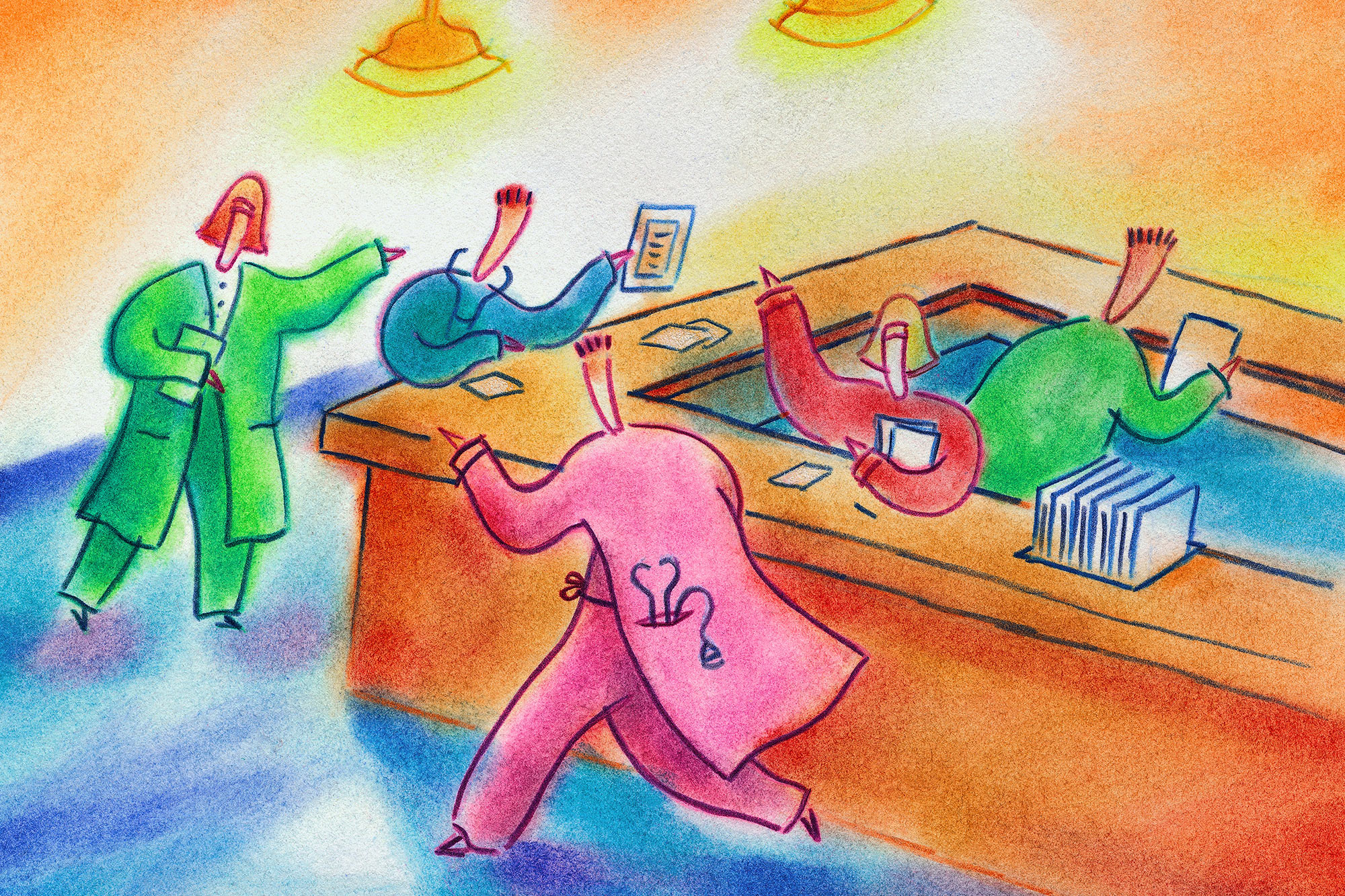 My first day as a medical resident, July 1st, 1990 fell on a Sunday. I was in a small, community hospital where I had completed my osteopathic internship. I had experienced medicine, surgery, peds, ob/gyn, and night float, and I was deemed ready. Ready to run the six-bed ICU and ready to oversee the interns covering the medical/surgical floors.

I have an aversion to asking for help. Just ask my parents. They tell me that, at the age of three, my favorite sentence, as I pushed their hands away, was, "I want to do it myself!" This inclination to be self-sufficient has helped me blend into medical culture. The physician is supposed to be in control of everything, especially her own emotions.

As most in the medical field know, July 1st is not a good day to be in a teaching hospital. Medical students have just become interns. Interns have just become residents. And on a Sunday, there is less support than usual.

After morning rounds, there are no attending physicians in the hospital, except in the emergency department. I was on my first 36-hour shift, and things went smoothly at first. The routine was not so different from internship.

I got sign-out from the resident going off at 7 a.m. I saw the ICU patients, got to know the nurses, Ronnie, Karen, and Susan. I was almost done writing my page-long, detailed notes when there was a loud overhead page. Code Blue, Room 211. Code Blue, Room 211. I grabbed my stethoscope and ran. So did Susan. The physical act of running distracted me from my anxiety.

When we got to the room, the red metal code cart was already there. The patient, a heavy-set African American woman in her mid-60s was breathing but had no pulse. We followed the resuscitation protocol, giving chest compressions, IV medications, and a shock to the chest. The patient’s heart rhythm returned to normal. She had a pulse and a blood pressure.

I turned to write the ICU admission note and the transfer orders. The ED doctor, who had come upstairs in case I needed help, said, "Looks like you’ve got things under control. I'm downstairs if you need me." As I looked through the chart, bed 211-A became Mrs. A. I called her attending. Dr. K. took the news calmly. He didn’t offer to come in, and I didn’t ask him to. I tried to notify her daughter of the change in status, but there was no answer.

Two hours later, while Mrs. A. was in the ICU, she coded again. We rolled the code cart to her bed, drew the curtain closed for visual, if not auditory privacy, and we ran through the protocol again. Compressions, assisted respiration through a bag valve mask, IV medications, shocks. We attempted resuscitation for 45 minutes.

Finally, with sweat staining through the armpits of my green scrubs, I called the code. It was time to admit defeat, to pronounce the patient’s death. This was the first time the decision had fallen to me, but I had no time to process my feelings. The patient’s family was waiting to enter the ICU. They needed to be told.

The nurses finished cleaning up the body. They straightened the light blue gown and smoothed the white sheets. I brought the group of four women to a small alcove off the ICU. Clearly, they had come straight from church. One woman wore a grey suit, one a navy-blue dress. One wore a gray pillbox hat with a small veil attached. They all wore black pumps, and they stood in a line facing me.

There was no place for us all to sit down. Knowing what I know now, I would have found a place to sit, no matter how cramped. As gently as I could, I said, “Mrs. A.’s heart went into an abnormal rhythm and it stopped beating. We did everything we could, but we weren’t able to bring her back.”

One of the women, the second from the left, let out an ear-piercing scream. “You’re telling me my mother is dead?” She dropped to the floor and continued her high-pitched wailing. Karen came running with a wheelchair. Karen and Ronnie helped the daughter into the chair, and they led the whole group down to the ED to get the daughter evaluated.

I still remember the feeling of relief as I saw the group leave the ICU. I've given bad news many times since that day. I've never had a reaction like that. Twelve days later, I would learn that I was pregnant, and I would read about how pregnant women should avoid stress, that it can be harmful to the baby. The stress I felt on my first day of residency was from feeling alone in my responsibility.

Yet, in retelling the story, I see that help was provided whether I asked for it or not. Susan came with me to the floor code. The ED doctor knew there was a brand-new resident on call, so he made his way up to the code. Karen and Ronnie brought the wheelchair and took over comforting the women when I was paralyzed, when I was too stunned to respond to a woman lying on the ground and crying.

At the end of my month-long rotation in the ICU, Ronnie would tell me how much she enjoyed working with me because I always stayed so calm. Her words surprised me. I certainly hadn’t felt calm when I was running that code. As I examine my stressful memory, I find memories of being supported. Though medical culture may frown on overtly asking for help, there is no ban on gratitude for the kindness of others.

Deborah Bayer, DO is Board Certified in Infectious Diseases and in Hospice & Palliative Medicine. She practices in Atlantic City, NJ, and she blogs about the therapeutic value of writing. Her poems have appeared or are forthcoming in The Stillwater Review, Hospital Drive, Mead, Shot Glass Journal, petrichor and elsewhere.