My Sudden Transformation from Caregiver to Cancer Patient 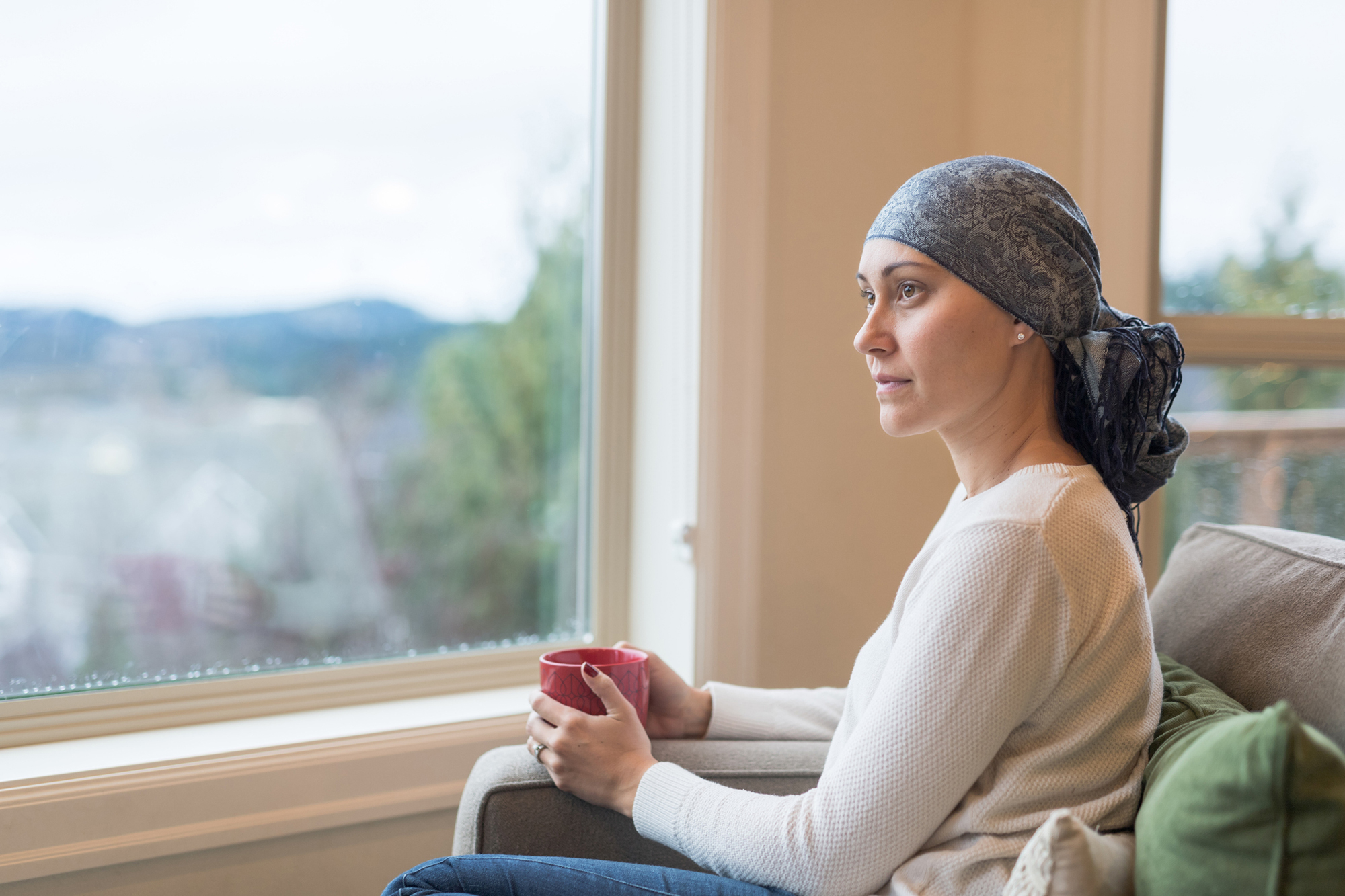 It is hard to fathom a scarier name for a disease than “triple negative.” When I found the first lump in my left breast, and then the second one under my left axilla, I felt a sense of doom and resignation. After more than 30 years as a primary care physician, I had palpated enough masses to know instinctively that this was not good.

I don’t know what made me slide my right hand against the side of my chest. It was early April, there was a spring breeze in the air, and an open shirt had replaced my winter turtlenecks. In the middle of a conversation with my husband, I suddenly fell silent, then announced to him unequivocally that I had breast cancer. I scheduled a diagnostic mammogram the next day, which confirmed the “high probability” of malignancy. From my recent mammogram eight months earlier, I knew the masses were new.

The next week was a whirlwind of testing, doctors’ visits, and existential dread. My entire life was in question. Despite VIP treatment facilitated by my status as an attending physician, the experience was debilitating. My office schedule was fully booked six months into the future and I didn’t know what to do with patients, problems, test results, and the thousands of other daily issues that needed to be resolved. I couldn’t concentrate, I doubted every decision. My partner physician took over, working 24 hours a day. I continued to check test results and refills. I still saw patients, in between my own testing, for several weeks.

Within 10 days of the oncologist visit, I had a biopsy of both lumps, a surgical consult, a PET CT, an MRI of both breasts, and a genetic consultation.

I tried not to touch my “lumps,” as if denying their existence would make them magically disappear. But I couldn’t help feeling them grow, exponentially, as if fueled by monstrous, dark energy.

There was no time. The results came back with a triple negative pathology and a positive BRCA1 test. Retrospectively, I should not have been surprised. My mother had died of ovarian cancer and I was of Eastern European ancestry. Why didn’t I get tested before?

At 65, I was actually old to develop this kind of cancer. Suddenly, I was transformed from a caregiver into a stage 2 triple negative patient. Would I be able to continue working? For how long? Would I live to see my grandsons go to kindergarten? How would my three children take the news? I was confused and grieving. I felt that something was fundamentally wrong and unfair. As a physician, I had always been the witness to other people’s diseases, the calm decision-maker. I was almost god-like in my feeling of remoteness. But, there was no time for pity: triple negative meant there were no hormone receptors on the tumors; I was facing four months of chemo, followed by a double mastectomy and radiation.

I made a list of my passwords, bank account numbers, kids’ birthdays, and tax due dates to allow my husband to function after I was gone. I wrote a do-not-open-until-I-die letter and safely tucked it into my password book. I informed everyone who would listen that when I died, I wanted to be celebrated, not mourned.

The chemo rooms at the oncologist’s office were artificially welcoming, with paintings of cheerful flowers and landscapes. As the spring turned into summer, I stared at the colors, but there was no cheer. I learned the chemo protocols. Two separate nurses would doublecheck my name and date of birth and then proceed to insufferably long infusions and preparations. Anti-allergics, steroids, anti-nausea injections first, and then chemo. Next, I chewed on ice during Cytoxan and Adriamycin to prevent gum disease. I had a port inserted in my right chest because my veins would not tolerate the onslaught of IVs. At the end of the five hour ordeal, Onpro was placed on my stomach, so that my bone marrow could be automatically stimulated 23 hours after the infusions. Throughout it all, my husband remained a strong support. He took notes, asked questions, and made jokes when the air became too thick.

I fell into a routine, thinking that I could continue to work part-time and then eventually resume full-time after the chemo was over. I moved a large table in front of the window of my family room, overlooking the backyard. I arranged my medication bottles as if it were a nurse’s station, showcasing my BP, temperature and pulse charts, my calendar of appointments, and my journal. I desperately needed to retain some control over my life and medical condition, as if monitoring everything like a good intern would prevent complications. I reread instructions multiple times: go to the ER if my temperature exceeded 99.4, or if I couldn’t keep fluids down, became short of breath, etc. Because of the severe photosensitivity associated with the drugs, I couldn’t be exposed to sunlight for even a minute. I watched the sun and the birds, the deer, and the squirrels. I watched the leaves grow, then turn yellow and orange. My world had shrunk to a window.

Quickly, reality set in. It became impossible for me to even think of working at the office. I was immunosuppressed, so I could not see any sick patients. I was weak, overwhelmed by my situation. I lost interest in solving anyone else’s medical issues. I dropped the ball into my medical partner’s lap. But, hoping this would be temporary, I continued to pay for my half of the overhead and my group’s central expenses. Despite their best wishes, no one was interested in cutting me any financial slack, aside from suggesting retirement. Fortunately, a few months prior to my illness, I had signed up for Medicare and very good secondary insurance. I never received a bill, and my expenses were limited to pharmacy co-pays.

Anticipating hair loss, I went to the “wig lady” who gave me a “grade 2” crewcut and many kleenexes to wipe my eyes (I sobbed during the procedure). I bought a wig but never wore it, favoring scarves. And so it went: one day at a time, living in the fog of survival. It was all about BP, pulse, temperature, bowel movements, eating, fluids, and making it to the next doctor’s visit, the next blood count, the next chemo, the next stage of treatment, the next day.

After the first two months, the chemo was changed to carboplatin and taxol every week. Because of the potential for severe allergic reactions, the first dose of Taxol had to be given over eight hours. Thankfully, I did not react. After the second carboplatin, I became anemic. My hemoglobin was down to seven from my usual 12. White count and platelets were down as well, giving me episodes of rectal bleeding. I became short of breath and tachycardic and developed a persistent cough. By mid-July, I knew I was in trouble when I couldn’t breathe. In the ER, I was found to be in heart failure with rapid atrial fibrillation. Admitted, lasix, cardizem drip, beta blockers, and heparin. Two attempts of cardioversions only kept my rhythm in sinus for 24 hours, then reverted into a-fib. I could barely stand because of severe orthostatic changes. I seemed to have developed Adriamycin cardiomyopathy. Chemo had to be stopped seven weeks prior to protocol, and the decision was made to keep me in a-fib and proceed with bilateral mastectomies. Time was of the essence.

At that point, it became obvious that I couldn’t practice medicine any longer, and because of the overhead with no income, I could not cover expenses. I decided to retire permanently and concentrate on my recovery. We had enough in our 401K to retire, thankfully. Faced with an existential threat, money became unimportant.

I received hundreds of letters from patients, wishing me the best and expressing sorrow at my situation. From my physician colleagues, however, there was a silence and lack of support that, in retrospect, was glaringly obvious. The decision to retire gave me huge relief. The burden of responsibility had been lifted. Even though I was in a-fib, the surgery went well. Because of the positive BRAC1 gene, I needed a bilateral breast removal and left axillary dissection, rather than a lumpectomy. I elected no reconstruction, which would have postponed radiation and increased the risk of infection. I was lucky to have had a pCR – pathologic complete response – which meant that there was no leftover malignant cells detected on the surgical specimen, including the six nodes from my left axilla.

For the next three weeks, the drains were the biggest hurdles. I was still in a-fib, still on beta-blockers and anticoagulants, but I was so happy to be off chemo that I would have traded it for a-fib anytime.

My hair slowly grew back, first a little fuzz, then small chemo-curls. The anemia corrected itself, and my nails became less brittle. Daily radiation began six weeks after surgery. For 10 minutes each morning, I was fitted into a mold and took my position on the radiation table. I used topical calendula lotion to prevent skin burns.

By December, my triple negative cancer therapy protocol was finished. I was left to pray that there would be no recurrence. Still in controlled a-fib, a cardioversion again failed after 24 hours. My ejection fraction had dropped to 35% from my usual 55. My cardiologist decided to give me some time to recuperate from the chemo toxicity and then consider possible ablation. However, by then, I had to deal with subtle and at times, not so subtle, symptoms of congestive heart failure, such as edema, dyspnea on exertion, and orthopnea. I slept with four pillows and Lasix was added to my regimen. Eventually, I was evaluated by the electrophysiologist at Mount Sinai, but a thrombus in my left atrial appendage delayed the ablation by three months. Finally, one year after going into a-fib post-chemo, an ablation was performed successfully.

Today, I am now fully retired, and feeling better. These are the lessons I learned:

Marianne Roosels, MD is a board-certified internist. Born in Brussels, Belgium, she graduated from Brussels Medical School in 1977 (ULB) and completed her internal medicine training in 1980 at Mount Sinai. After working as an ER physician for six years, she went into private practice in Red Bank, New Jersey until 2018. She lives with her husband and has three grown children and two grandsons.