Most Doctors Are ‘Very’ Concerned About Health Care Consolidation

A recent Doximity poll of over 2,200 clinicians showed that 88% are concerned about the rise in hospital and practice consolidation.

“The general landscape is that, for several decades now, health care consolidation has been an increasingly important issue, where consolidation of health care providers, hospitals, doctors has been rising over time,” said Dr. John Mafi, an associate professor of medicine at UCLA and physician policy researcher at RAND corporation. “It’s a major problem.”

Significant ramp up of hospital and medical practice consolidation appears to be unsettling a health care workforce that has faced wide-ranging challenges over the past few years. Health care mergers and acquisitions surged in 2021, and though the number of transactions has slightly slowed over the past year, the average and total revenue of transactions in 2022 have been hitting record highs.

The responses of more than 2,200 clinicians who participated in the Doximity poll, including over 1,700 physicians, underscore their unease with this trend.

Among physicians, 68% are “very” concerned and 20% are “somewhat” concerned, whereas only 11% are “not too” concerned or unconcerned. These results were similar across physician gender and career stage (early, mid, or late).

Of note, while many health care professionals are concerned about consolidation, a higher percentage of physicians (68%) appear to be “very” concerned than NPs/CRNAs (61%) or PAs (55%). 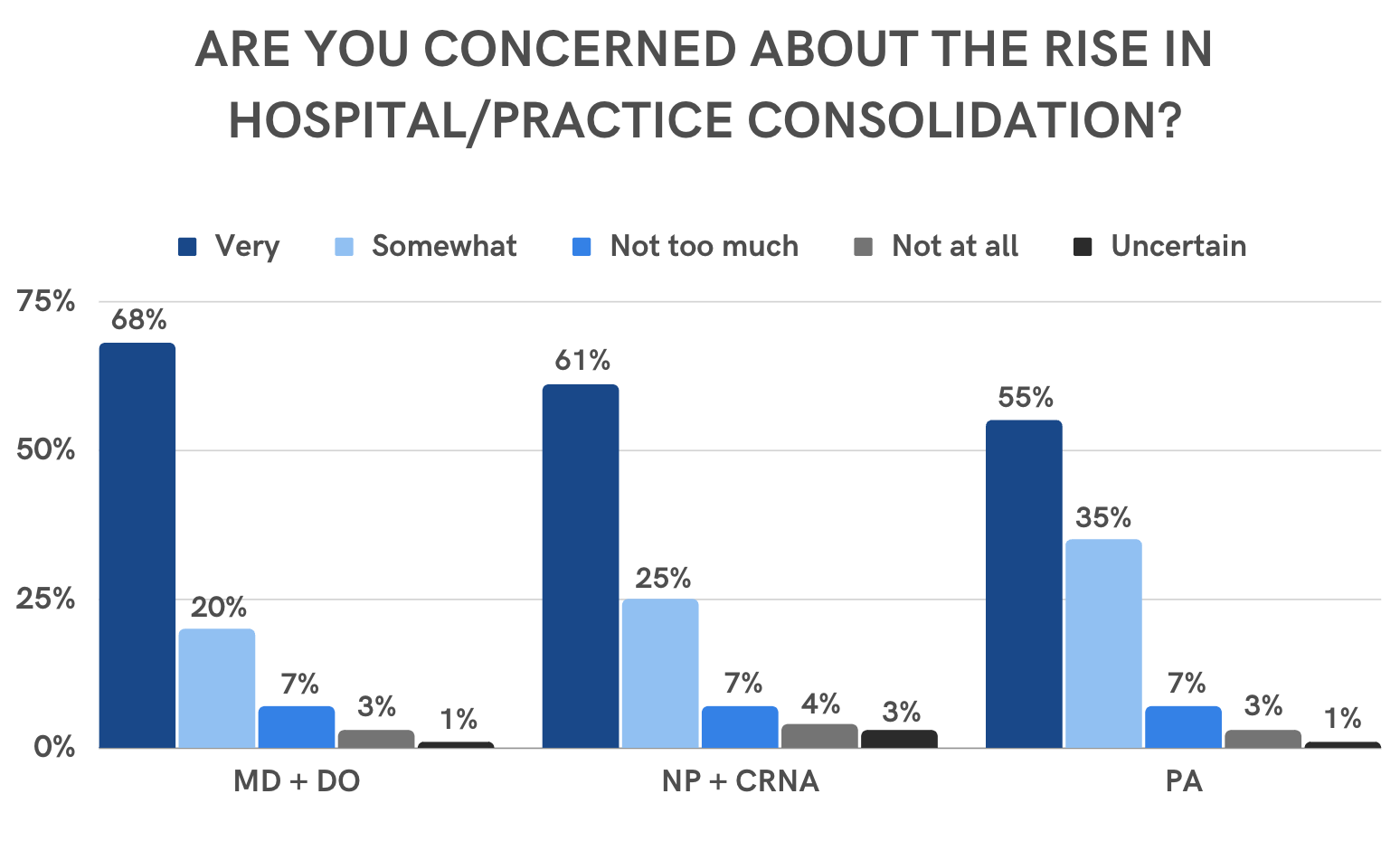 “As doctors, we are being diluted and marginalized while our field is being squeezed more and more by profit driven insurance companies, health care administration systems, hedge funds and private equity firms,” said Dr. Daniel Block, a psychiatrist in West Grove, Pennsylvania.

The concern is particularly acute in certain medical specialties. Specialties with the highest percentage of “very” concerned physicians are pulmonology (85%), plastic surgery (81%), cardiology (74%), internal medicine (74%), and anesthesiology (74%). Pediatricians (54%) are least likely to be “very” concerned. 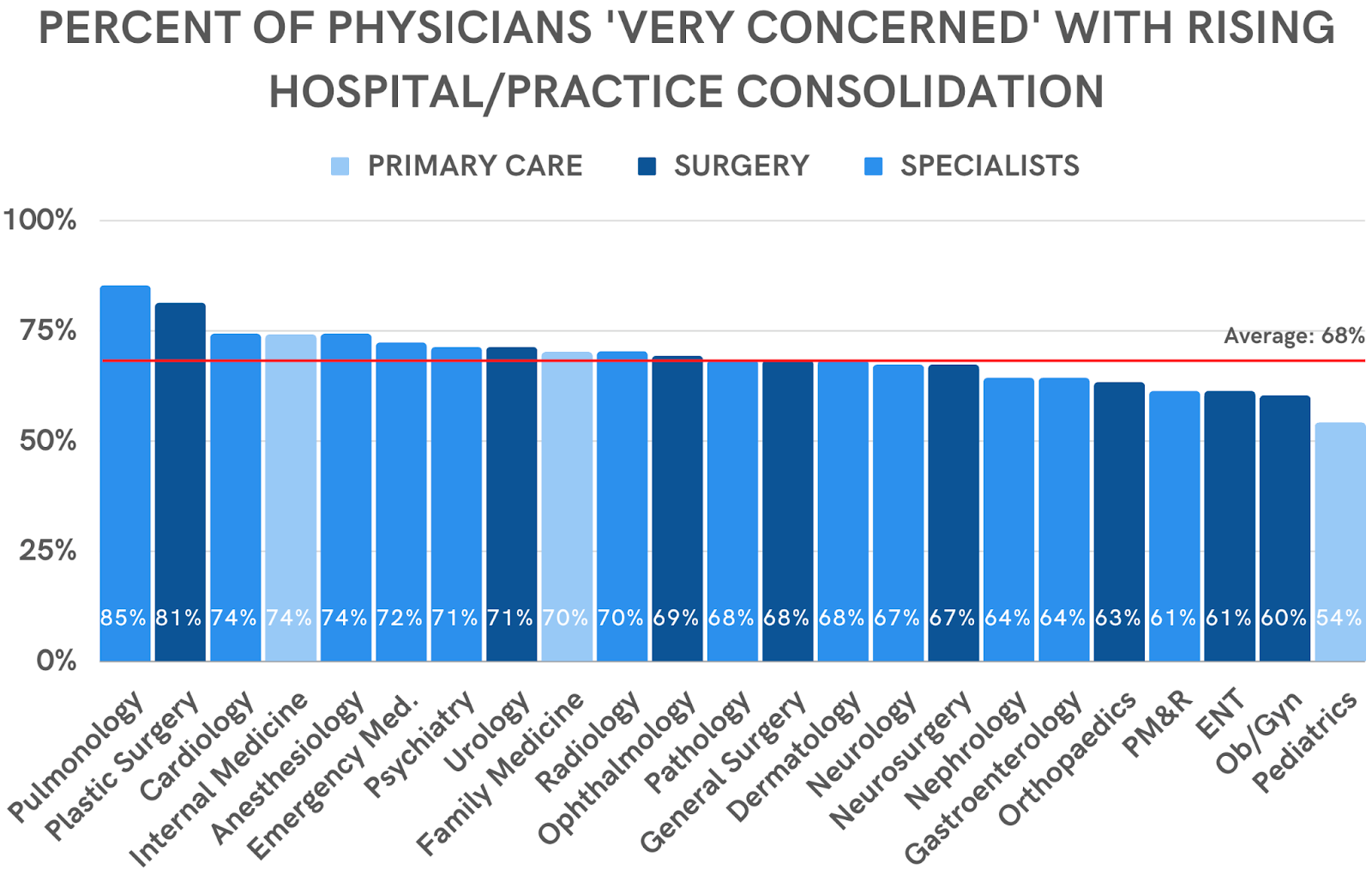 As the number of employed physicians continues to grow, specialties that have potential to work outside of large health care systems — such as radiology, dermatology, gastroenterology, and orthopaedic surgery — may be more shielded from consolidation than others, noted Dr. Dean Troyer, a pathologist practicing in Virginia.

“More physicians are going to be employed, with some exceptions for specialties that can rely less on hospital systems for revenue,” he said. “Some specialties may therefore still breathe outside the health care system.”

"Corporate entities are large fish that will continue to gobble up smaller players not already swallowed up by regional or national health care players,” Dr. Troyer said.

In theory, a large integrated health system capable of addressing every aspect of patient care is ideal — improving overall health care by reducing inefficiencies and lowering costs, according to health policy researcher Dr. Mafi. “But that has not borne out with the evidence,” he said.

A wide body of research has shown that consolidation paves the way for higher health care prices, while studies examining its effect on quality of care are conflicting at best.

“Has [consolidation] improved quality?” Dr. Mafi said. “It’s unclear, but probably not. The only thing that seems to change is the prices of services go up.”

Despite these concerns, hospital mergers and acquisitions continue to make headway, with 70% of health care executives predicting an increase in activity in 2022, according to a survey from earlier this year. Some policy experts have suggested that governing bodies such as the Federal Trade Commission should be more assertive in blocking these transactions, or at least establishing prerequisites such as quality of care improvements and price limits, Dr. Mafi noted.

“The bigger issue is also that our health care system is, by definition, fragmented,” he said. Payment reform enforced in one of the major buckets — Medicare and Medicaid, commercial insurance, safety net, the uninsured — “may have the unintended consequence of pushing hospitals and physicians to get more aggressive about consolidation so that they could charge more.”

In response to this landscape, Dr. Block argued for a more decisive, physician-led response.

“The only way any of this changes will be if physicians begin a concerted fight — refuse contracts en masse, fight the labor laws so we can organize, and encourage patients to litigate against insurance companies when there are bad outcomes based on insurers practicing medicine without a license,” he said.

That view, however, may not be unanimous. Even physicians deeply concerned about growing consolidation may see personal or professional upside. For example, newly trained physicians, PAs, and NPs are anxious about taking on the financial and administrative burdens of owning an office or clinic, which often involves more responsibilities and greater personal risk, Dr. Troyer noted.

Nevertheless, if large health systems are able to demonstrate clear improvements to quality of care while also maximizing revenue, then its clinicians may ultimately benefit too.

“It's really tough because the physician community benefits financially from integration,” Dr. Mafi said. “The idea of having an integrated health system, where every aspect of your care is addressed, does have a conceptual appeal. … But the way that [consolidation] is often being done may not be enough to truly coordinate care and improve efficiency.”

What concerns, if any, do you have about rising hospital and practice consolidation? Share your thoughts in the comment section.