Most Clinicians Don’t Want Their Kids to Work in Medicine. Interest Is Booming Anyway

Three out of five clinicians would not want their children to pursue a career in medicine, according to a recent poll on the Doximity network.

Of the more than 12,000 physicians, APPs, pharmacists, and medical students who voted in the poll, only 40% want their children to work in medicine. This proportion dips to 24% of clinicians who “definitely” recommend not only a career in medicine but also in their particular specialty or clinical vocation.

Medical professions are widely touted as noble and rewarding, but the path to becoming one — already marked by rigorous educational and training processes and considerable sacrifice — may be growing more difficult. And whether clinicians recommend the career to their children has varied over the years, with reasonable arguments for both sides of the equation.

A survey from 2019 reported that about half of physicians would recommend their children pursue medicine. But a variety of factors, many heightened by the pandemic, may have contributed to rising pessimism in recent years: diminishing autonomy, being overworked, administrative red tape, and the soaring cost of medical education compared with relative declines in income, to name a few.

“The art of medicine has become the business of health care,” Dr. John Hardin, a dermatologist from Tennessee, said. In the same vein, a family medicine physician working in Connecticut added, “I kind of feel like there’s a sadness about what’s left of the profession, not entirely unlike the sadness parents have about the state of the world we are leaving for our children.”

The results from the latest Doximity poll, conducted in January 2021, underscore this general concern among a broad spectrum of health care professionals. 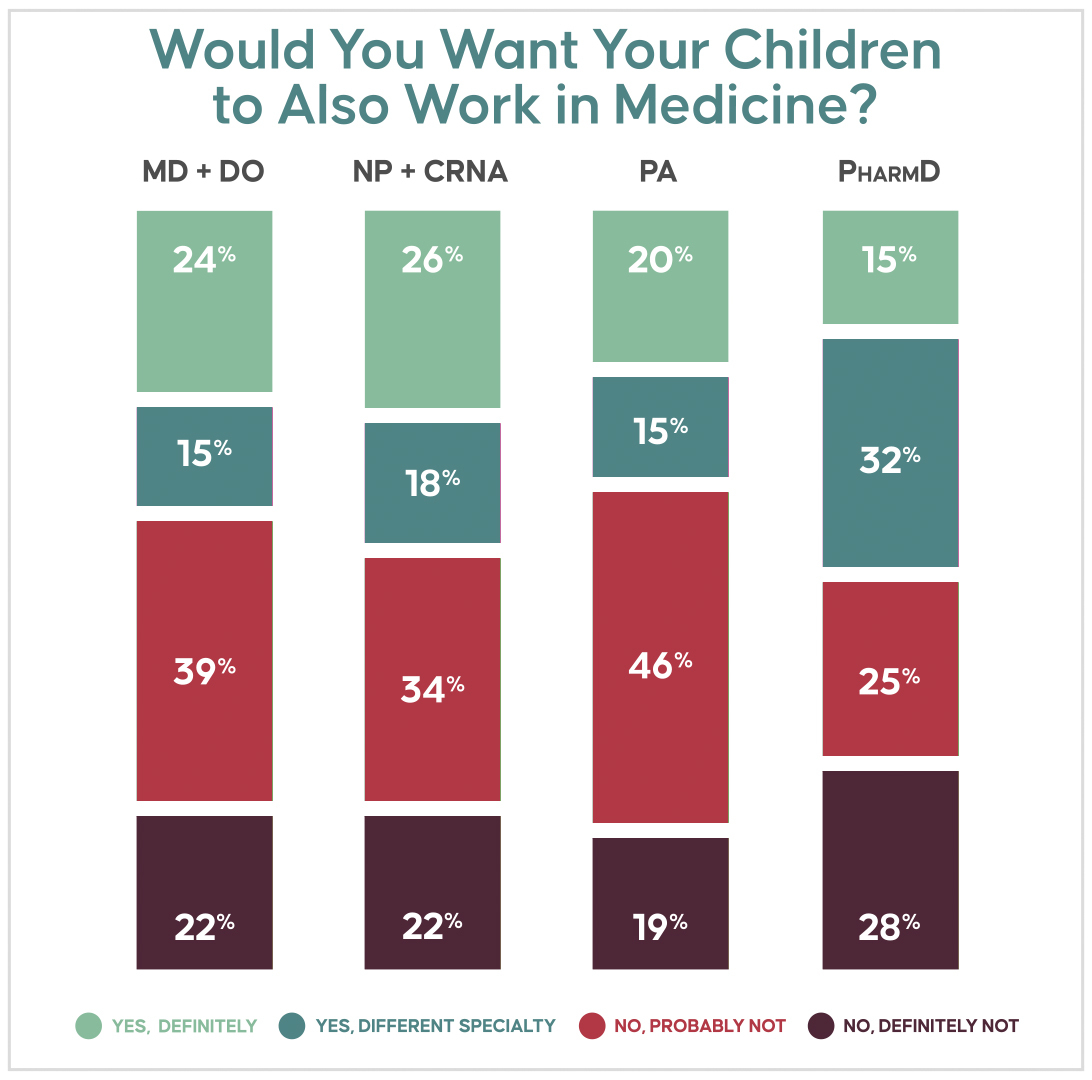 The most optimistic cohort are pharmacists, nearly 47% of whom recommend a career in medicine, although most favor a different clinical vocation. Surveys from 2020, showing that the vast majority of pharmacists are unhappy, suggest that many might recommend other professions within health care to their children.

In contrast, PAs are least likely to recommend a career in medicine to their children. Only 35% of PAs recommend their profession, even though it consistently ranks among the most coveted jobs in the nation, topping the U.S. News & World Report “Best Jobs” and “Best Healthcare Jobs” lists in 2021.

The distinctions become more apparent by clinician age. The poll shows a general trend associating younger age with a lower likelihood of recommending a career in medicine.

Clinicians’ initial idealism may wane soon after beginning their tenure. The notable dip at the age range of 30 to 34 coincides with the point at which many medical residents conclude their training, and after most other clinicians have gone through the early years of their work.

Conversely, most clinicians on the older end of the age spectrum, 70 and older, are likely to recommend a career in medicine. Considering the average retirement age is in the late 60s for NPs and around 69 for physicians, post-retirement nostalgia could be influencing their preference.

There remain uncertainties about the main driver behind this sentiment: Is the practice of health care becoming increasingly difficult over time? Rapidly expanding medical knowledge, mounting rules and regulations, and growing demand may suggest so. Or is medical work simply structured to be more taxing for younger clinicians? The lion’s share of “grunt” work is often earmarked for early stage clinicians and trainees, which could help explain why they are less likely to recommend a career in medicine.

Another perspective to consider is the possibility of generational differences. Experts have cited age as one of the most common predictors of differences in attitude and behavior. The poll results highlight an approximate correlation between generations, as classified by Pew Research, and the likelihood of wanting their children to work in medicine:

Women may also be less satisfied with their work experience than men. Only 36% of women would want their children to pursue a career in medicine, according to the poll results, markedly less than the 43% of men (p<0.005). The well-documented gender pay gap, along with countless reports of gender bias and discrimination against women, likely contributed to their pessimistic outlook. A recent study estimated that the current physician wage disparity would result in women earning an average of $2 million less than men over a 40-year career.

And yet health care professionals’ overall disinclination for the field does not appear to have relaxed enthusiasm among younger generations. Rather, interest in medical careers has surged across the U.S. over the past two years, with health care forced into the foreground of public attention by the pandemic.

Medical school applications and enrollments both hit record highs for the 2021–2022 school year, with the largest year-over-year increase (17.8%) by far since the AAMC started tracking these data in 2002. The number of certified PAs has steadily grown by more than 6% since at least 2014, and predictive modeling projects continued employment growth for PAs and NPs well beyond 2030.

Whereas some clinicians lament the direction the industry appears to be heading, others steadfastly recommend a career in medicine, describing it as a beautiful profession and one that has led to experiences “better than imagined.” Many proponents of a medical career have acknowledged the challenging work involved but are still willing to encourage their children to pursue it, especially if they consider it their calling.

“Nothing will stop someone from pursuing their passion,” Dr. Beatriz Demoranville, an endocrinologist at the Warren Alpert Medical School, said. “For us, the passion is being threatened by an impersonal metric-driven, profit-driven, corporate-driven health care system. But when I walk into the room and I am with my patient, all is worth the fight. So if my child has a passion for medicine, yes.”

“Medicine is the noblest profession since man walked the earth and will ultimately maintain that status,” added Dr. Stephen Aprill, who practiced for more than 40 years as an internist in Kirkland, Washington. “The kid should do what makes them happy.”

Would you want your children to also work in medicine? Share your thoughts in the comment section.