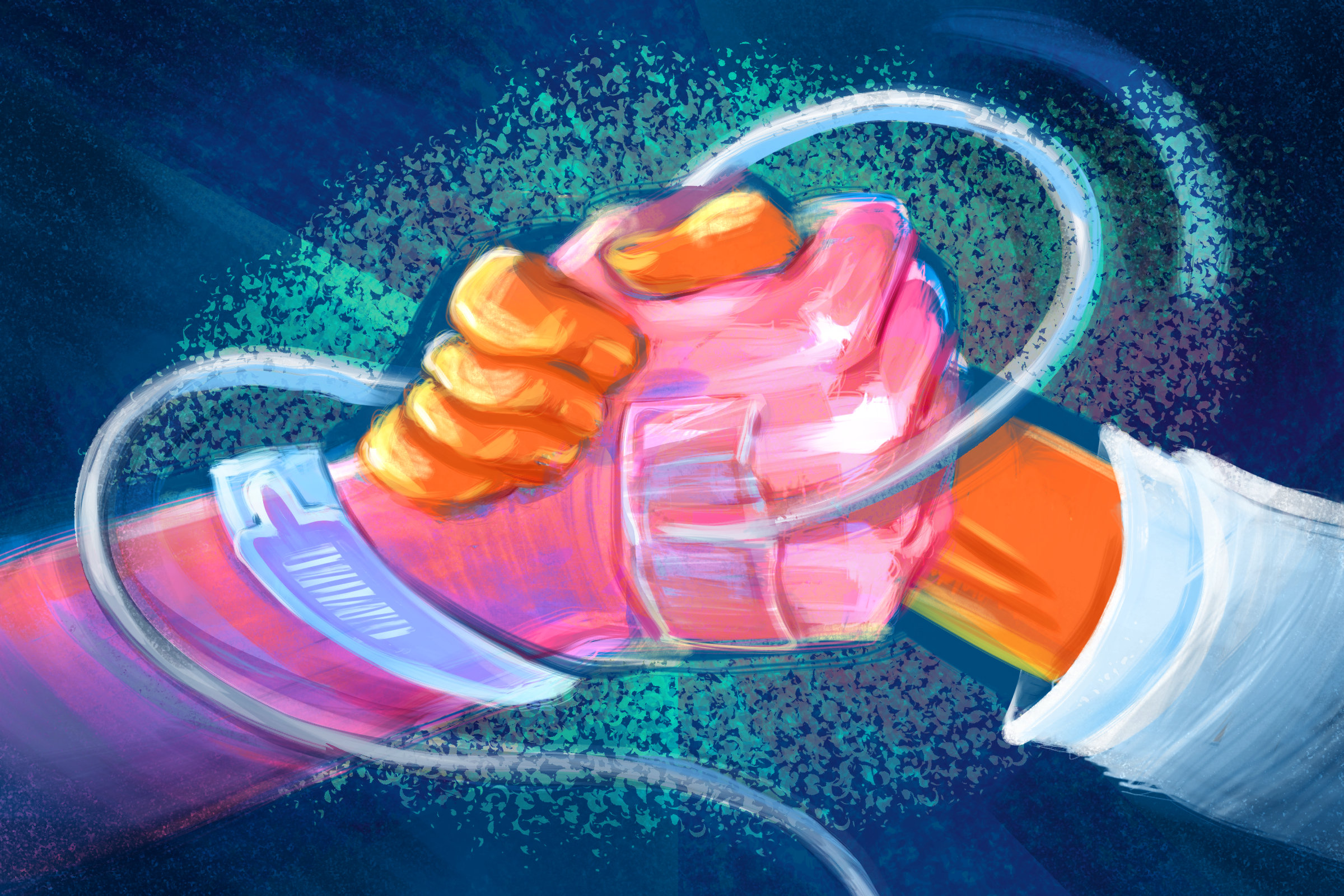 Medicine is a language unto itself, and the facts we clinicians acquire are, clearly, vast.

Few uniforms (save, perhaps, for the soldier) are as simultaneously respected and burdened. The doctor’s coat, long and white, represents scientific objectivity but also a sort of armor — a barrier to disease and a beacon of cleanliness. Watching a doctor walk away suggests the billowing cloak of the wizard or the prophet.

To go further, the white coat suggests moral purity — a robe of virtue that puts others before itself — heeding “the call of the suffering other” without question of cost, color, or creed. Robert Louis Stevenson called the doctor “the flower of our civilization,” describing the physician not with words of technical competency or the vague langue of “core values,” but rather with the crunchy language of virtues:

"Generosity he has, such as is possible to those who practise an art, never to those who drive a trade; discretion, tested by a hundred secrets; tact, tried in a thousand embarrassments; and what are more important, Herculean cheerfulness and courage. So it is that he brings air and cheer into the sickroom, and often enough, though not so often as he wishes, brings healing."

We have been given a great gift in medicine — the ten thousand words, the coat, the healing. And to whom much has been given, much will be required.

The cover is embossed with a golden rod of Asclepius (the staff entwined with a single serpent) and a stylized script of Ho bios brakhus hē de tekhnē makrē ho dè kairòs oxús, which translates to that famous line Vita brevis, ars longa, occasio praeceps: “Life is short, and art long.” Humanists in medicine always seem to leave out the last part: “Life is short, and art long, opportunity fleeting, experiments perilous, and judgment difficult.”

Doctoring is a fleeting, perilous, and difficult gift; and yet it is also beautiful — what Martí-Ibáñez describes as a “glorious ideal of service and devotion” — always more than a science and never only an art. Martí-Ibáñez saw medicine not merely as a transactional product to be provided but as something metaphysical to be practiced: “To be a doctor, then, means much more than to dispense pills or to patch up or repair torn flesh and shattered minds. To be a doctor is to be an intermediary between man and God.” The late Paul Kalanithi, celebrated over the last several years for his stunning bestseller "When Breath Becomes Air," wrote something similar. He became a physician because he sought “the pastoral role.”

We are graduating, arguably, in the most cynical, burnout age of medicine in history. One that sees such a pastoral vision as impractical. Lovely, sure—but impractical. The metaphysical is unable to be measured reliably and therefore unactionable and unprofitable. John McPhee warned as much as early as 1986 in his classic Heirs of General Practice: “The old doc of the magazine cover — magician, counsellor, metaphysician — had been replaced by technicians with machines and clipboards.” Last year, in the AMA Journal of Ethics, physicians Aparna Sajja and Christina Puchalski expressed concern that today’s “medical training falls short of preparing physicians to help patients with the metaphysical needs of their illnesses.” Intermediaries, metaphysicians, and pastoral surgeons have been replaced by technicians with machines and computer screens.

But we are not technicians. Nor are we cogs in a machine. (Our patients aren’t either, by the way — no matter how modern medicine’s reductive models of bodies and intensive care might form us to think otherwise.) In the age of silicon and screens, it will take courage and imagination to push back against those that would tell us to forego the metaphysical, turn back to the EMR, and “just do your job.”

Theologian Abraham Joshua Heschel predicted to the AMA in 1964 that while “the admiration for medical science is increasing, the respect for its practitioners is decreasing. … What many of us fear is a collapse of the old and traditional esteem for the character of the doctor, an increasing alienation between the healer and the sick.” In 1966, 73 percent of Americans stated they had great confidence in the leaders of the medical profession. By 2012, that number withered to 34 percent. Moral theologian Willian May put it starkly: physicians walk a “high-wire between deep respect and deep resentment.”

And yet, patients will continue to come to us. They will come to us neither because they respect us nor in spite of resenting us, but because they are suffering.

Some patients will come to you and I, in this age of unprecedented loneliness, simply because they long for someone to listen to them. Never forget that you can get all the questions right about your patient’s hypertension and totally miss the fact that is their failing marriage, their lack of community, or their loss of purpose that is killing them.

We walk this high-wire. It is worth asking then, whether we are seasoned on the line or fresh off the graduating platform, what will balance us as you walk? The funambulists say you can’t look down — that you have to choose a point on the horizon and stare at it. You have to find an immutable stillpoint.

We may think that balance in modern medicine requires acrobatic feats of strength — brilliant diagnoses and large-scale reform projects. Financial wizardry and effortless wellness. For some that will be true. Just like some people become pediatric neurosurgeons. And some people have no student loan debts. And some people memorize the number pi to sixty thousand decimal points.

For most of us, though, the balance will be quieter — more boring but no less beautiful. As Jewish bioethicist Laurie Zoloth writes, today’s deep and difficult questions of patient care lie not in exotic cures or heroic reforms, but in the “ill paid” signs we are too distracted and overworked to notice:

No, that is the language of presence and lament — of intentionally wasted time, disruptive charity, and resistant love.

If you and I are merely procedural, clipboard-wielding “providers” of health-related goods and services, then this may be true. There may be nothing more we can do.

But if we are called to something more, a practitioner of the pastoral, artful, and moral — a mysterious intermediary between science and art, man and God — then there may be more we can do. If that is the stillpoint of health we can attune our vision toward, then I suspect we will find balance. It is not the life of the acrobatic hero but merely that of the healer, walking the high-wire with poise and humility. And when there is nothing left for us to provide, there will always remain more for us to practice.

John Brewer Eberly, Jr., MD, MA is a fellow of Duke Divinity’s Theology, Medicine, and Culture Fellowship, a rising fellow in the 2019–2021 cohort of the Paul Ramsey Fellowship, and a rising PGY-1 resident in family medicine at AnMed in Anderson, South Carolina. Brewer’s writing has appeared in JAMA, Academic Medicine, AMA Journal of Ethics, STAT, Hektoen International, Journal of Religion and Health, First Things, Mere Orthodoxy, Student Doctor Network, and elsewhere. He is currently finishing his first book, "The Closing of the Medical Mind: How Medical Education is Failing Patients and Impoverishing the Souls of Today’s Medical Students."