Medical Myths: Dead in One Place, Alive in Another 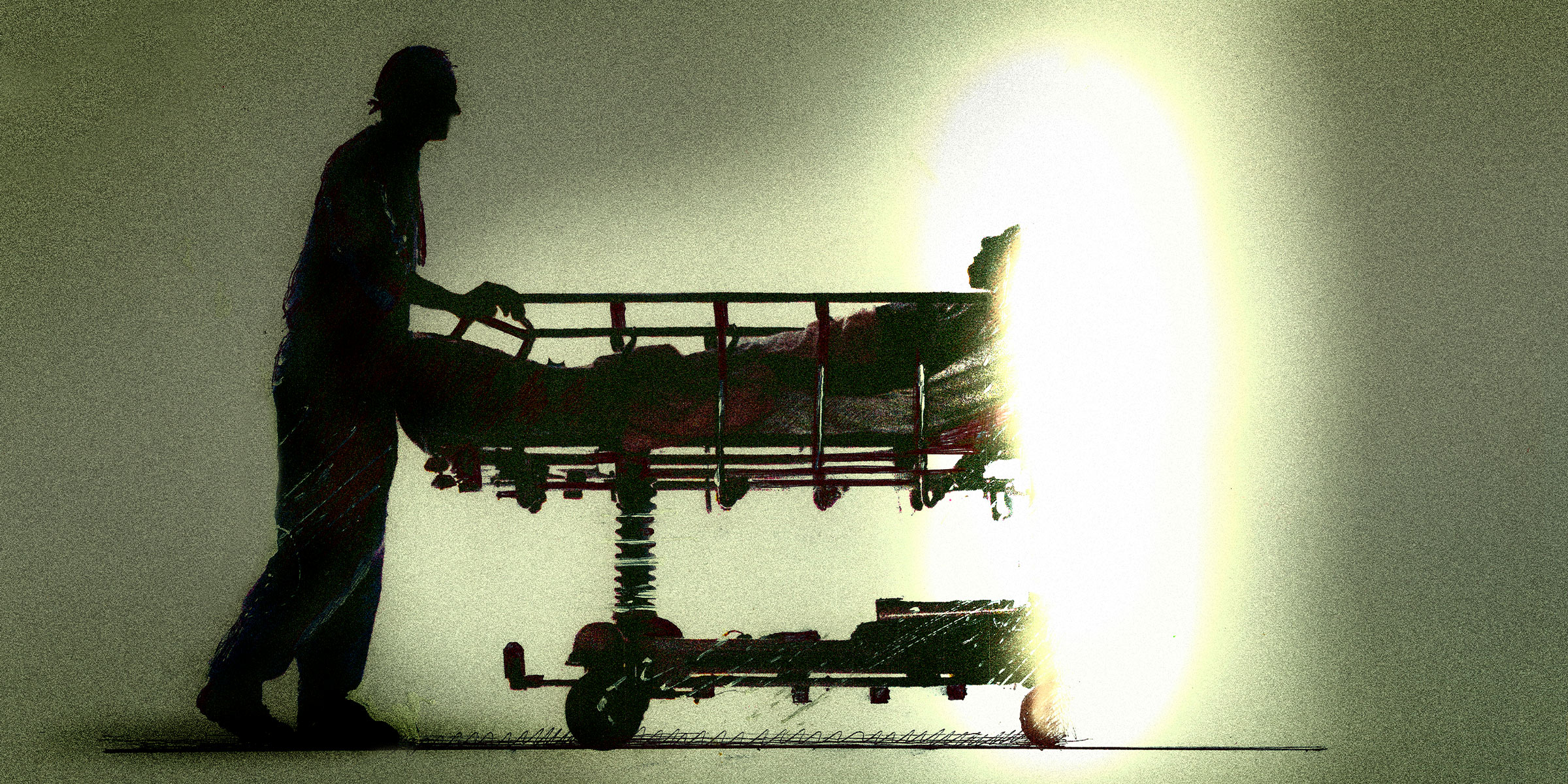 A mother and her son looked on as Dr. David Greer disconnected the mechanical ventilator from a young man. Other than the sounds of the medical monitor, all was silent. Dr. Greer, professor and chair of neurology at Boston University School of Medicine, proceeded to insert a cannula down the patient’s endotracheal airway to just above the carina, delivering oxygen to a body unable to breathe on its own. For the 10 minutes it took to complete the apnea test, oxygen continued to flow into the patient’s body. For 10 minutes, the body remained without breath.

“Watching a patient not breathe for 10 minutes for the duration of an apnea test — that’s extremely powerful,” Dr. Greer said in an interview with Doximity. “That helps the family understand that the patient really is gone, that the patient really does have no brain function, and that, without this ventilator, their heart would've stopped.”

With a clinical exam and an apnea test, Dr. Greer was able to diagnose the patient as brain dead. Legally and medically speaking, the patient was “officially” dead. But would the same patient have been considered dead if his family had objected — for religious reasons, for example — to the determination of death by neurologic criteria? What if they were not in Massachusetts but in New York? And what if Dr. Greer was not a neurologist but a different medical specialist?

All to ask, could a person declared dead in one instance be considered alive in another?

For centuries, the medical community equated death with cardiopulmonary failure, according to Dr. Gene Sung, associate professor of neurology at the USC School of Medicine. You were dead when your heart stopped beating, or so the aphorism went. The emergence of positive-pressure ventilation, followed by CPR in the 1950s, however, challenged this traditional unitary approach to death determination.

A team out of Harvard Medical School formally introduced the concept of brain death in 1968 in an attempt to resolve the increasingly enigmatic understanding of death. In 1981, the American Medical Association and American Bar Association approved the Uniform Determination of Death Act (UDDA), which states that “an individual who has sustained … irreversible cessation of all functions of the entire brain, including the brain stem, is dead.” All 50 states then accordingly recognized the definition of brain death as a matter of law. Yet the ambiguous wording of the UDDA, that death determination needs only to be determined according to “accepted medical standards,” left room for considerable variation. Even today, with the 2010 American Academy of Neurology guidelines in place, there remain critical differences in practice across state lines.

“Though most physicians have some understanding and agreement about what brain death entails, there's a high variance in how people actually determine brain death throughout the world,” Dr. Sung told Doximity. “You could officially be determined brain dead in one place and not in another.”

Within the U.S., there are differing policies regarding not only the prerequisites for performing a clinical brain death exam but also the number of physicians required to perform the test and the degree of specialization required. There are also inconsistencies in the way states address family objections. In California, for example, hospitals are required to provide “reasonable efforts” to accommodate objections to brain death determination; in New Jersey, religious or moral objections to the process override hospital policy; and in Idaho, clinicians must adhere to the “usual and customary procedures” of individual communities.

“That's the issue — there's so much variety in who can do these declarations based on where you are and what your specialty is,” Dr. Sung said.

The discrepancies are even broader internationally. Among 136 countries reviewed in a report published July in Neurology, nearly 40% have yet to establish any kind of national brain death protocol, and roughly 30% have mandated ancillary testing, which is not required in the U.S. The ongoing pandemic has added yet another layer of conflict to brain death determination in COVID-19 patients with catastrophic neurologic injury.

“In thinking about death there are a lot of different aspects to the thought process — social, legal, medical, philosophical,” Dr. Ariane Lewis, director of the division of neurocritical care at NYU Langone Health, said. “But at the end of day, as a society, we need to have clear criteria for what is defined as death versus what is not.”

To that end, Drs. Greer, Sung, and Lewis collaborated with international professional societies and experts to pen a special communication outlining the minimum standards for brain death determination. Their statement, the first of its kind to be issued on a global scale, was published in JAMA earlier this month. They described it as a “template” and “textbook foundation” for brain death determination, intended not to supplant existing guidelines but rather bolster uniformity in practice. Specialists in the field have commended the work, though not without recognizing the various critical questions left unanswered.

“The new proposal is an effort to put standardization into what is presently chaos,” UCLA professor emeritus Dr. Alan Shewmon told Doximity. “Though the effort is laudable, my concern is that what’s being proposed as the standard is not a wholly adequate means of diagnosing brain death.”

“How does one determine ‘irreversible cessation of all functions of the entire brain’ purely with a clinical exam?” he continued. “That’s the problem — there really isn’t a way. It’s presumed that brain function is irreversibly lost if it doesn’t return after waiting a certain amount of time, but the diagnostic criteria have never been properly validated, because patients diagnosed as brain dead are typically not supported long enough to observe whether any brain function will return.”

To underscore his point, Dr. Shewmon referenced multiple occasions in which he believed a patient received a false-positive diagnosis of brain death, including a case report of a two-year-old boy who began to breathe spontaneously after being declared dead, as well as the highly publicized case of Jahi McMath.

“Jahi McMath fulfilled the diagnostic criteria for brain death, but after the passage of time, she demonstrated intermittent responsiveness to command, had three documented menstrual periods, indicating hypothalamic function, and an MRI scan showing grossly intact gray matter without cerebral atrophy; she was clearly alive,” he said. “These cases are evidence of global ischemic penumbra, the most deceptive brain death mimic and a condition that the existing diagnostic algorithm fails to exclude.” Of note, Dr. Sung and colleagues have argued against the claim that Jahi was not brain dead.

There are myriad other confounders that also remain unaddressed. For instance, a hospital in Georgia was authorized to keep a pregnant patient on support against her advance directive because she had lost her constitutional right to refuse treatment after being declared brain dead. In Michigan, a legislator is pushing a proposal (Bobby’s Law) to allow parents to delay apnea testing indefinitely, thereby postponing brain death determination. “If a patient is in global ischemic penumbra mimicking loss of brain function, the apnea test could push the patient over the edge and convert penumbra into brain death, causing the condition that it’s purportedly diagnosing,” Dr. Shewmon said. “That’s why I think there ought to be informed consent for the test.”

Beyond these points of dispute, it remains unclear just how willing the collective medical community is to actively incorporate the new recommendations, despite wide-ranging endorsement. A past survey of hundreds of neurologists found that, even though family consent is not required to discontinue support after brain death declaration, none endorsed immediately overruling a family’s objection.

Why? Perhaps because “the stakes are so very high,” Dr. Lewis said. “You don’t ever want to have a false determination.” Dr. Greer added that “this is a diagnosis you have to get right 100% of the time. It’s not a test you can get right 99% of the time and congratulate yourself, because if we have one missed diagnosis, that’s one too many, and we erode public trust in the process.”

However paradoxical, that the same person in the same condition can be ruled dead in one place and alive in another has been a reality for decades. The mystery, then, seems to be why there has not been greater impetus by policymakers to actualize a consensus on death determination, and why it has taken nearly 40 years since the advent of brain death for the first such statement to manifest.

“Change is slow in medicine, even for things as urgent as this,” Dr. Greer said. “It’s not a matter of being lazy or sinister, but unless an accrediting body is forcing their hands, it will take time.”

For now, there is at least a cautious hope that the new recommendations could help drive the medical community ever closer to a unified understanding of death. “Hopefully, this statement will help minimize differences in practice and laws within the U.S. and other countries,” Dr. Sung said. “And if we can help families deal with the dying of their loved ones, I think that also would be a great accomplishment of this project.”

“The golden rule right now is, when in doubt, don’t declare someone dead,” Dr. Greer concluded. “But if there is a way to say with absolute certainty that a patient is dead, we can provide more finality for families wondering about the prognosis. That’s what it did for the young patient I treated. His wife and son were really struggling with letting him go. Seeing that helped them move on.”