Imposter in a White Coat

In recent years we have been successful in naming an entity that a lot of physicians experience: Imposter syndrome (IS). Originally described in 1978 as an affliction associated with high-achieving women, it has since been identified as a challenge a variety of people — especially racial, ethnic, and religious minorities — face.

Imposter syndrome is roughly defined as feeling undeserving of one’s accomplishments coupled with an internalized fear of being discovered as a fraud. At first, it seems a silly disposition for an accomplished professional; the reality, however, is that IS is actually much more prevalent in the medical community than one might guess (affecting anywhere from 30 to 44 percent of residents). It seems impossible that a high-achieving person who has been successful in all their education and career endeavors, who functions as a skilled and knowledgeable physician/surgeon, may have periodic intrusive doubts. How do such individuals attribute all of their accomplishments to luck?

Unfortunately, I have suffered from IS for longer than I had a name for the experience. As a member of a high-achieving family, I was never a stranger to academic success. Though I regularly graduated at the top of my class, I can’t say it ever really sunk in that I was a well-accomplished person. Perhaps my endeavor to remain humble worked against me; I wanted to avoid taking on any traits of haughtiness, which limited my ability to fully step into my identity without doubt. Throughout my early education, I often worried that I was simply lucky to have been recognized for my good work, that I had slipped through the cracks. I felt like I had to keep up the facade that I was smart, lest I slip up and reveal the opposite. I never dwelled too much on these thoughts, and I like to think I never let them affect my performance — but they were always there nevertheless.

When I reflect on this particular challenge, I find myself questioning why, when I sit down at the surgeon’s scope in preparation for a procedure, my IS thoughts are rarely there. This is where it is important to note that IS is not a lack of self-confidence, a subtle nuance that can be confusing. When it comes to surgical skill, I don’t find myself doubting my abilities or technique, as I have had the good fortune of quality training and mentorship, which has led to a solid foundation of self-confidence. Instead, I feel the effects of IS most when it comes to recognition and feedback.

I first began to suspect that these internalized thoughts might be something others experience on my first day of medical school. During orientation, the Dean told everyone to take a deep breath, that we all belonged exactly where we were, that no clerical errors had been made in the admissions process, and that no one had been admitted on accident. I was astonished by how she spoke directly to the internal turmoil I was experiencing at that very moment. I had graduated Cum Laude from Northwestern University with dual majors six weeks prior, but I still worried I was in over my head. The collective sigh from the audience of 128 medical students was an eye-opening moment for me: I wasn’t alone.

There were also times that I fought against the notion that the IS I was experiencing was unfounded. A friend in my medical school class made a comment about how the people in the class were among some of the most successful in the country when it came to academic excellence. I scoffed at the remark. If I could get admitted, anyone could, right? It would take time before I would realize that recognition of one’s own accomplishments can be done in a way that isn’t an exercise in self-praise or arrogance. In a society increasingly entrenched in constant self-promotion, in which accomplishments are used as currency online and on social media, I found — and continue to find — it difficult to establish a balance of knowing I have what it takes.

As I continue to achieve in my residency and make plans for fellowship, the increased discussion around IS has helped me to identify an adversary that I, for the longest time, did not even know I was fighting. In this journey, I have learned to identify the signs of IS as they occur, and to actively redirect my thought process in another direction. It does not come easy. The process involves unlearning cognitive behaviors that I have grown accustomed to over many decades. For those who may be wondering if IS expains some of their thoughts and emotions, there is a questionnaire that helps quantify one’s experience. There are also resources outlining specific steps one can take to help overcome the challenges associated with IS, which include reframing one’s thoughts, learning from one’s mistakes, and relying on an established support network. And, when it comes to IS, simply putting a name to a commonly experienced syndrome can be helpful in overcoming its challenges.

Have you or your colleagues struggled with imposter syndrome? Share your experiences and advice for overcoming this common syndrome in the comments.

Dr. Saaquib Bakhsh is dedicated to ending the healthcare disparities faced by our most vulnerable populations. His focus includes the interplay between race, socioeconomics, culture, environment, and public health. He was born and raised in Chicago where he earned bachelor's degrees in statistics and environmental sciences from Northwestern University. He completed medical school at Rush University and is currently in ophthalmology residency in Michigan. He is a 2020–2021 Doximity Op-Med Fellow.

Read I Would Rather Die Than Not See
Link to Paul S Lee, MD's page

Read Giving Back with Medicine 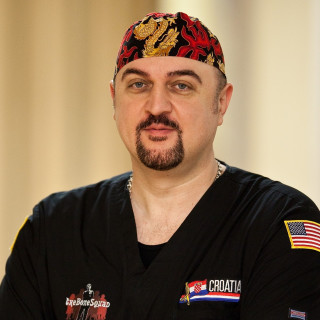 Giving Back with Medicine

Read The Smallest Gestures Can Mean the Most

The Smallest Gestures Can Mean the Most

Oct 5, 2018 Link to The Smallest Gestures Can Mean the Most