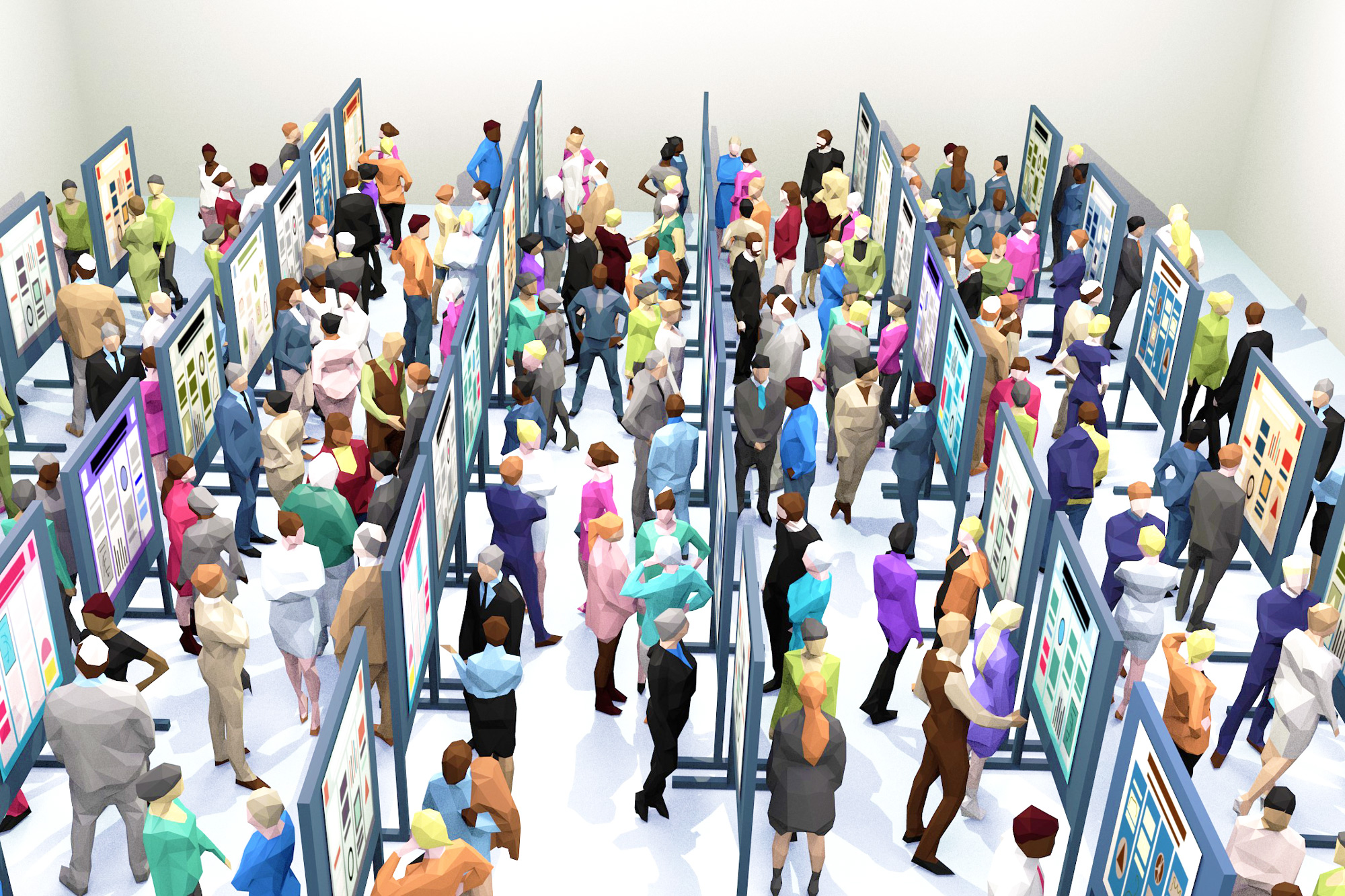 The ACG 2019 meeting just closed in beautiful San Antonio, TX, and we were both fortunate to attend both the post-graduate course and annual meeting. IBD remains a challenging condition to clinically diagnose and manage. As a profession, we still do not fully understand the triggers causing IBD and what treatments best manage these difficult chronic conditions. New medications are increasingly needed and focus on the biologic variability of both ulcerative colitis and Crohn’s disease. How to best choose medications for individual patients to optimize response and minimize adverse effects is largely made by therapeutic trial. New drug testing and monitoring has raised the level of the scientific approach to treatment, however, a significant proportion of patients are difficult to manage with any choice.

Before I begin, I would like to start with a big shout-out to the ACG staff without whom this meeting would not be what it is. Newer changes, include the use of texting for questions and a very user-friendly electronic meeting syllabus that contained all speakers slides and the ability to note-take (and then to email these), schedules, maps and posters, were well done and quite impressive!

I attended a few sessions. At the ulcerative colitis (UC) Update 2019 by Dr. David Rubin, a recap was given of the ACG clinical guideline update from the red journal (Am J Gastroenterol 2019;114-384-413). There is now a new ACG UC activity index, which has added urgency, fecal calprotectin, and endoscopy score to categorize patients as either in remission, mild activity, moderate-severe activity, or fulminant. Dr. Rubin highlighted endoscopic mucosal healing as a target for therapy and provided a good review of the Mayo and Ulcerative Colitis Endoscopic Index of Severity (UCEIS) endoscopic criteria. UCEIS is a measure we initiated as a substudy of the ASCEND 3 trials of Asacol and has been widely validated and available as a service to the GI community. Interm data on Tofacitinib pulmonary emboli and mortality was presented, touching key points of increased risk of blood clots and death specifically from higher doses of this drug. This has led to the FDA requiring anti-TNF failure first and tapering the maintenance doses to 5mg BID if able. There was also a report of the FDA approval for ustekinumab for Induction and maintenance of moderate-severe UC (10/18/2019) (Sands BE NEJM 2019;381(1201-1214). Significant news at the meeting continued to be VARSITY (the randomized, controlled trail of Vedolizumab vs Adalimumab in patients with active UC). In a nutshell, this study showed benefits for patients on Velolizumab compared to adalimumab with higher rates of clinical response and remission as well as greater decreases over time in calprotectin and CRP levels. (Sands BE NEJM 2019;381(1215-1214).

Millie Long, MD of North Carolina covered the topic “Optimizing Biologic Therapy.” She reviewed the IBD therapy concept of treat to target and need for tight therapeutic control (including TDM). She stressed the need for early mucosal healing to improve outcomes. For example, the definition of “deep-remission” as a clinical objective was reinforced. Moreover, the need for early intervention (earlier diagnosis or preemptive prevention) was covered. It was reinforced that clinicians need to watch for poor prognosis factors including young patients, extensive bowel involvement, perianal or severe rectal disease, penetrating or stenosis at diagnosis, and smoking. Dr. Long noted that symptoms do not always correlate with inflammation. Also, a recurring theme of many speakers was the tenant that tight disease control with monitoring leads to improved clinical outcomes.

Sunanda Kane, MD (the outgoing ACG President) tackled the talk on the Role of Biosimilars. This included a nice review of how biologics are manufactured. The reason for an allergy or antibody formation to originator drugs is that there is an allergy or antibody formation to its biosimilars. Her talk covered how current drug level assays work with biosimilars as well and included an up-to-date review of the global experience with biosimilars (good data).

A practical approach to TDM was given by Corey Siegel, MD of Dartmouth. He discussed the potential benefit of PROactive (certainly more controversial but data accumulating) drug monitoring (as compared to REactive, though broadly supported). Specifically, higher drug levels are supported by better remission rates and mucosal healing overall, across all biologics for both UC and Crohn’s. One caveat is to be aware of antibody or drug assay difficulties. Remember the patient first and check labs again before doing ANYTHING based on questionable testing. We now know this can happen based on recent experience, unfortunately.

Positioning Therapies in IBD: What Is the Initial Treatment Strategy?

During the Annual meeting, Symposium 2A (Positioning Therapies in IBD: What Is the Initial Treatment Strategy?) included talks by several opinion leaders.

First, high risk Crohn’s was covered by Uma Mahadevan, MD of USF. She reviewed treatment options for CD and reinforced lack of evidence proven data of mesalamine efficacy (reviewed SONIC, REACT and CALM studies). Some data trend for combination biologics was included in this talk, albeit not yet ready for general adoption.

Kim Isaacs, MD covered the literature on Low-Risk Crohn’s disease. She focused on Crohn’s that is at low risk for progression, based on clinical symptoms (none or few) and labs (CRP or calprotectin) supporting inactivity. These patients have a benign clinical history and associated lack of endoscopic activity to support a more aggressive management approach. Kim also discussed the natural history of CD paper by Burisch (Burisch, 2019 Gut 68:423-433). She also touched on the area of controversy regarding 5-ASA use in CD. Hopefully a current withdrawal study in Canada will help clear up some of the varied opinions regarding mesalamine benefit in Crohn’s. Kim listed good practical recommendations with a “graded-treatment approach” based upon literature, clinical experience and individualized care.

High-risk UC was covered by David Rubin, who described the clinical assessment of fulminant UC, etiologic triggers, and management. He discussed medication selection based upon factors reflecting high risk disease. This included the use of anti-TNFs, cyclosporine, tacrolimus, and surgery in the severe UC subgroup. More data was provided regarding recommendations and strategies of monitoring biologic therapies.

The Wednesday afternoon session on IBD included a talk on Treat- to- Target 2019 by Dr. Edward Loftus. He reviewed the radiologic options for IBD monitoring (CTE vs MRE). Dr. Lofutus covered the poor correlation between symptoms and CRP/endoscopy. (Peyrin-Biroulet GUT 2014;8895). His lecture included benefits and limitations of endoscopy, Calprotectin, and histologic criteria for disease assessment. Perhaps calprotectin is one of the better ones so far? We have seen an ongoing cooling in interest of composite endpoints such as CDAI and Mayo (which are not optimal, however, it is hard to tell what they will be replaced by). Potential replacement contenders include the UCEIS (from our Asacol HD ASCEND 3 substudy) and the CDEIS.

The second speaker in this session on TDM was Dr. Bincy Abraham of Houston. She discussed the potential reasons for primary and secondary treatment failures with biologics. This included alternative inflammatory paths, factors unrelated to IBD, and specific drug level issues. Drug-level case in point was supported by TAXIT results (Vande Casteele United European gastroenterology Journal 2013, 1:A1).

The challenging topic of withdrawing medications was given by Dr. David Hudesman. His talk covered combination therapy, the controversial topic of TNF stoppage, and also how these drugs may be restarted. Some of the references relating to TNF withdrawal was derived from Pediatric data (Kierkus et al. JPed Gastro Nut 2015 13:51421). However, with careful monitoring during the “stop” phase of biologics, Dr. Hudesman said the withdrawal of these medications has some literature. Albeit this is still not ready for general application, the immunologic data supporting an individual patient's immune tolerance to their biologic drug is not clearly known. Reintroducing anti-TNF treatment in stopped patients was also reported (Baert Clin Gastro Hep 2014; 1474-81) and best predicted by the presence of antibodies to drug. It is still not ready for general application, however, due to limited clinical experience.

Some interesting case presentations were shown at the poster session. This included a nice poster on Crohn’s disease mortality and ambient air pollution in NYC by Feathers. This poster showed some great work of mapping SO2 (an air pollutant) and the association with IBD in the greater NYC area. Another poster on the epidemiology of major depressive disorder in UC in a National study presented by Chouhan continued to provide data regarding the increased incidence of depression in UC patients, particularly the elderly. Dr. Victoria Rai presented on the finding of increased incidence of sinusitis amongst IBD patients. A poster from Penn State on the use of RDW as a differentiating marker for IBD was presented by Dr Navabi (showed the odds of having CD was 1.67 x greater with RDW >14.2, OR CD vs UC=1.67(95%CI)p=0.002). Finally, a case of DRESS causing subacute fulminant hepatitis secondary to sulfasalazine was presented by Michael Sydor of UTMB as a rare, idiosyncratic cause of liver injury in IBD.

All-in-all, a very informative and educational meeting. Nicely done all and congratulations on a very successful meeting.