I Was the First Doctor Who Looked like Him

Dr. Cedrek McFadden lives with a purpose: a life of service. Through medicine, mentorship, web conversation moderator, or speaking at his church, he strives to better the lives of those around him.

And this isn’t something new to Dr. McFadden. He has been around health hardships since his childhood.

“I grew up in a family where we had a lot of sick people. I had a grandma who had multiple medical comorbidities and she spent a lot of time in the hospital, and I was around her a fair amount growing up and exposed to her struggle and some of her challenges,” Dr. McFadden remembers. “So that was the initial sort of thing to pique my interest and sort of question, ‘What’s really going on?’ and asking the whys, and getting the breakdown of the generic answers that you’d get of ‘Her heart’s sick’ — well, what does that mean?”

Because Dr. McFadden has experienced that lack of understanding on the patient side, he’s in a good position when it comes to moderating #TalkWithTheDocs, a live video show where doctors sit and answer questions sent in by patients and listeners from the general public about healthcare.

“We are constantly challenged to make sure our patients understand what we are saying and that we are using language that they can digest,” says Dr. McFadden. “I’ve enjoyed being able to educate not only my patients, but anyone who wants to talk. Church people come up to me often and ask, ‘This is going on, what does this mean?’ and really breaking down that information for them.”

Beyond helping the people at church with their medical questions, he also created a group at the church for students interested in medicine, which is one of the ways he mentors.

“I helped create this ‘Future Doctors’ group where students can have an interest in having medical careers and actually being a physician,” Dr. McFadden says. In addition to this group mentorship, he currently has two one-on-one mentorships with medical students, who have his contact information and can have an open dialogue with him to keep him updated on their progress.

The role that Dr. McFadden plays in the lives of these students is something he lacked growing up.

“I did not have a lot of examples that I knew personally growing up. I think what drives me to be a mentor now is perhaps my lack of a really good mentor throughout my process,” Dr. McFadden says. “There’s a quote that says, ‘Be the mentor you wish you had’ and that in itself has become my strong motivator to provide mentorship and be a good example and to have conversations that I always wanted to have.”

He tries to expand the network of mentors that black men in medicine like himself can access by resurrecting and repurposing the hashtag #BlackMenInMedicine. After Dr. McFadden saw a story about medical school enrollment of black men go viral on twitter, he and some colleagues decided to create a forum.

“We started having a robust and real conversation about what we can do to help highlight the disparity of physicians and maybe find ways to be examples that would lead those that were coming behind us,” Dr. McFadden says. “We tend to think we’ve made progress as a society — we’ve had a black president, more African-Americans hold advanced degrees, but for some reason, that progress does not translate well to medicine.”

He even treated a patient that had seen that delayed progress.

“He had a cancer and we were able to diagnose and treat it, and in the process I got to meet his family. It was big family and they all showed up for the day of the surgery and in the conversations that ensured he look up at me and said, ‘You know, you’re the first black doctor I’ve ever had.’ Someone who is in their seventies, who has seen the Civil Rights movement, who saw what our nation has progressed to,” Dr. McFadden says. “He never had a doctor take care of him that looked like him.”

That patient has stuck with Dr. McFadden and encourages him to keep pursuing his life of service in and out of medicine.

“I tend to do things I’m passionate about, because those would be the things that you tend to put your heart into,” Dr. McFadden says. “We are on this earth for such a short amount of time, and we have a lot of work to do. Anything that looks like we can help in any way, we should get some of that work done.”

Read Caring for Patients and My Female Colleagues at CHEST 2018

Caring for Patients and My Female Colleagues at CHEST 2018

Read The American Dream? Investigating Health Care in the U.S.

Mar 8, 2019 Link to The American Dream? Investigating Health Care in the U.S. 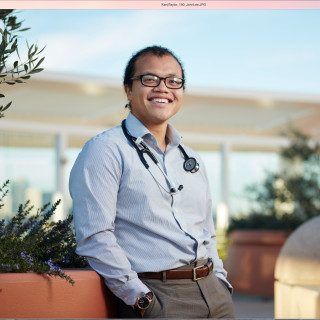