I Stayed so He Wouldn't Die Alone, but He Still Did 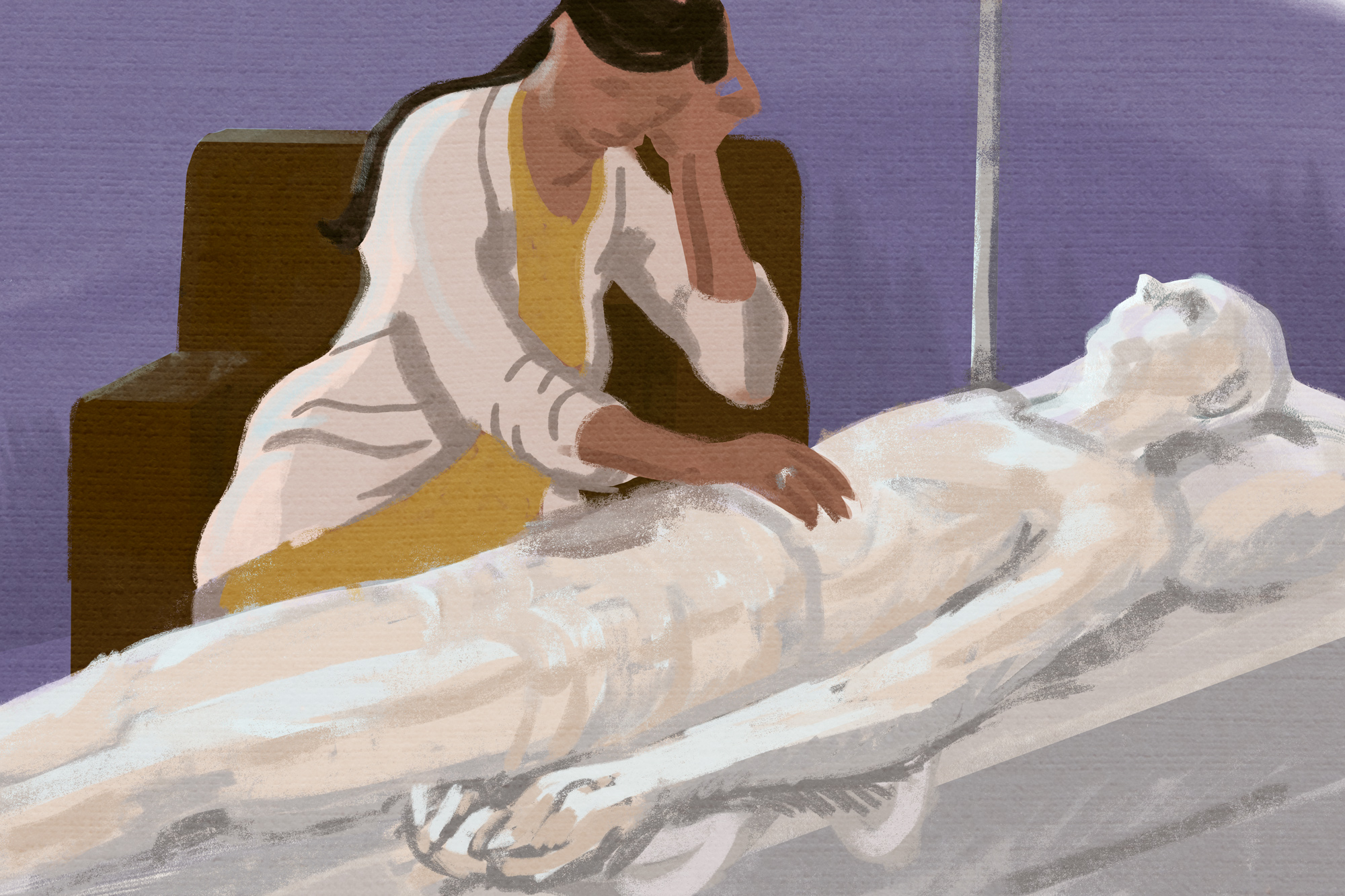 “Good morning!” I shouted to my first comatose patient, “Can you please open your eyes?”

“Louder,” said my attending physician, “And after a few times, you should lose the ‘please.’”

My attending was by no means a cruel man. He explained that while the examination of a comatose patient may appear brutal, it is at its heart an act of compassion, a search for vital information from someone too sick to volunteer it independently. It is often only the most unpleasant stimulus that ultimately elicits a response. Therefore, under his guidance, I proceeded to spend the next few minutes being as unpleasant as possible.

I pressed my fist into the patient’s sternum. I pulled his eyelids open, scratched the edge of his cornea with a cotton swab, and pretended to hit him in the face to see if he would “blink to threat.” I called his name while pressing a penlight so hard onto his fingernail that my own hand shook. Despite all of this, he remained still. It was only when I gagged him with his own endotracheal tube that I got a response, a brief flinch. “Gag reflex intact,” said my attending physician, “What does that mean?”

According to my textbook, it meant that only his medulla, the most primal part of his brainstem, still functioned. He had suffered a substantial intraventricular hemorrhage several days ago and had shown only decline since then. Meanwhile, my brain was on fire, simultaneously rehearsing the reflex arcs of the cranial nerves and wrestling with what I had just done to a very sick man.

Later that morning, the team physicians explained the patient’s prognosis to his niece. She asked for a few hours to process the news before returning to say goodbye to her uncle. The next day, however, I learned that although she had called the unit several times overnight, she felt unable to physically walk through the door. A resident asked me if I would be willing to call her. “Ask her how we can be helpful to her right now,” he said, “It’s a good time to learn how to do these things.”

She answered the phone right away and launched into a scattershot onslaught of apologies. Her guilt rushed turbulently into my ear, like air forced into a balloon.

“You know,” I said, “If you want, you don’t have to be here when the tube in his airway is taken out. We can just call and let you know.”

“Are you able to stay with him when it happens? So he isn’t alone?”

A few minutes later, staff from the unit filed into the patient’s room with measured reverence. I stood at his bedside and held his hand as his endotracheal tube was removed. The breaths that followed emerged with great effort, punctuated by small gasps of silence. “He’s Cheyne-Stokes-ing,” said the nurse. I thought of the waveforms under that headline in my textbook, oscillating amplifications and flatlines in sets of two, and silently agreed, although they sounded messier than they looked.

A few seconds passed before an intern wondered aloud if the patient was uncomfortable, if he needed anything. Then, as if he hadn’t doubted it at all, the intern briskly walked to the computer and typed in orders. “Up his fentanyl a little,” he said to everyone, or to no one, and walked out to address more pressing matters.

“How long does dying take?” I asked the nurse.

“It really depends,” he said, “Sometimes days.” He suctioned the patient’s mouth and throat while apologizing profusely. “I still talk to them until the end, on the off-chance they can hear it.”

I sat at my patient’s bedside for eight more hours. The rhythm of his breath, the rattles from his chest, and the nurse’s gentle care seemed to stretch infinitely.

As I held the hand of this dying stranger, I wondered how many times I had visualized a scene like this and how inaccurate I had been. I remembered the physical exam I had performed for the first time the day before, an action that was undoubtedly just from the perspective of a physician but felt plainly cruel to me as a human. I thought of my attending physician’s quiet comfort in this space, wondering how long it would take for me to see what he already found obvious.

Late in the evening, an on-call resident entered the room. “It’s not going to happen tonight,” he said, “You should go home. By the way, we all think it’s cool that you’re doing this. I wish I had, back when I had the time.”

I called the patient’s niece, telling her that her uncle was still breathing but that I had to leave the hospital. “He won’t remember this,” I said in a gentle tone, both to her and to myself, “A nurse will be with him all night so he won’t be alone.”

I slept fitfully in my quiet apartment. The next morning, I received a short email from a resident I didn’t know: “FYI Jessica: Your patient passed at 05:17 AM.”

I didn’t say a prayer or think of the patient’s life, something about which I could only hypothesize.

Jessica Burris is a fourth-year medical student at Vanderbilt University School of Medicine in Nashville, Tennessee.