I Had 2 End-of-Life Discussions: One as a Daughter, One as a Doctor 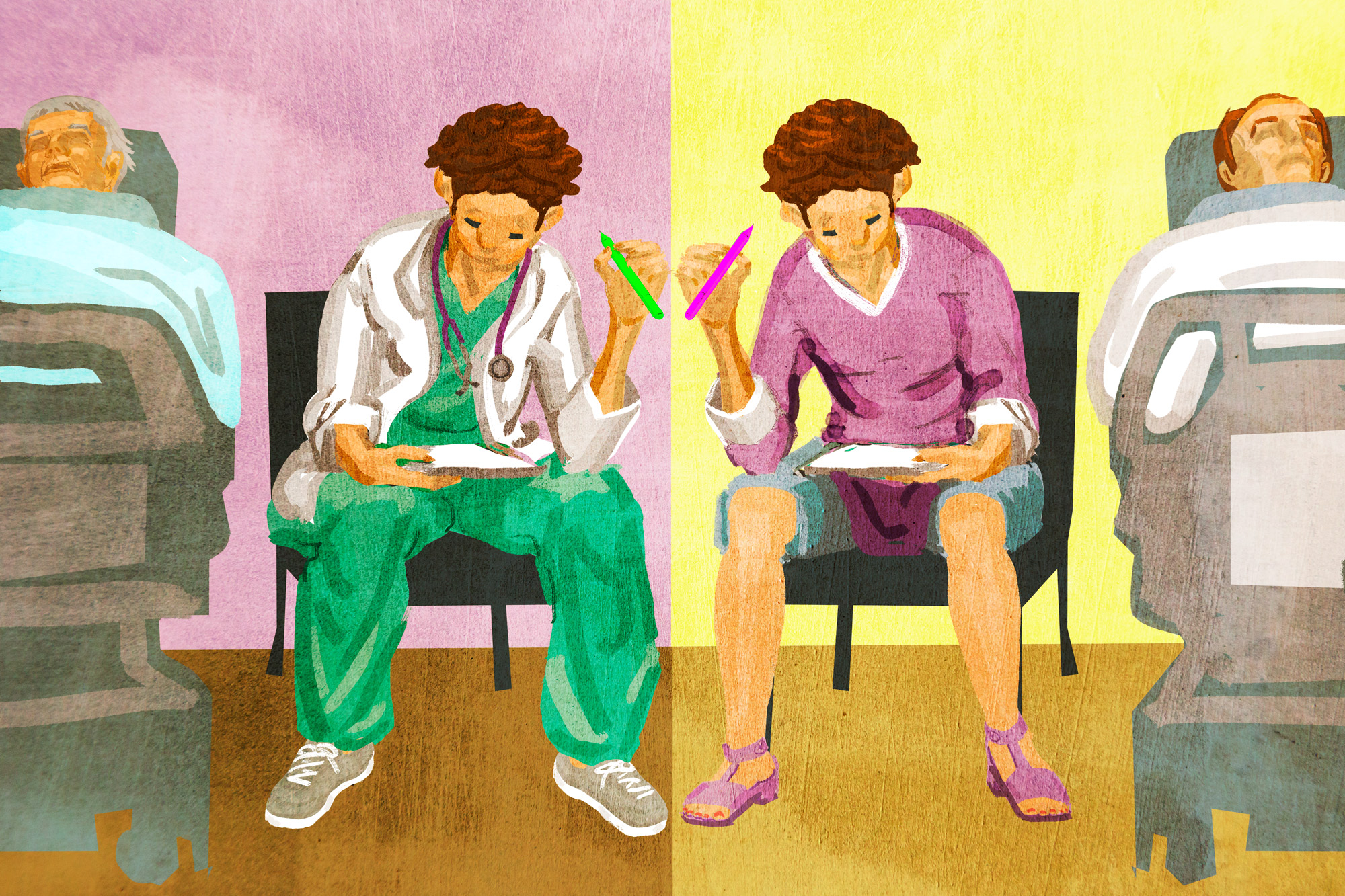 Two months into my intern year, night shift number 17 in the MICU at midnight, I received a phone call from my mother asking me what to do for my father. He had failed his swallow study. One month prior, my father overdosed on insulin, seized, was intubated, and suffered severe neurologic injury, presumably from prolonged hypoglycemia. After progressing from the ICU to the floor to a nursing home, he fell and broke his hip, requiring emergent surgery with re-intubation. He never fully regained his ability to swallow and was aspirating, now a week after his second extubation. My father could talk, he knew that I was his daughter, though he couldn’t remember I had grown up or become a doctor (finally). He ambulated — until he broke his hip. He was impulsive, labile, and had violent outbursts requiring confinement in a Posey bed (which he thought was a train carriage), but he also occasionally smiled brighter than I had ever seen in my life. My father had been a brilliant writer and he had suffered from severe depression. Reading had been his solace and only form of joy. Now he couldn’t read, he couldn’t retain a memory for more than a moment, and he couldn’t write. I knew he wouldn’t consider that a life worth living.

Over the phone that night, my mom asked me if we should give consent for a percutaneous endoscopic gastrostomy (PEG) placement. I cried in a dark corner of the ICU as I said no. No because it would only prolong his suffering and death. But no also meant I would never have a meaningful conversation with my father again. No meant he would die soon. No was the hardest decision I’ve ever made.

The next morning, nearing the end of my 16-hour shift, emotionally and physically exhausted, I had a nearly identical conversation with a patient’s son, except this time I was the doctor. The elderly patient needed surgical revision of his PEG, which had become dislodged. The patient was bedbound with no ability to speak or interact after a devastating stroke and countless complications. He had been steadily declining for many months, with multiple ICU admissions for respiratory failure and multi-drug resistant ventilator-associated pneumonias. The patient’s son had quit his job to stay home and care for his father, independently, 24 hours a day. He learned to do trach care and tube feeds. He emptied the Foley and changed the soiled diapers. He repositioned his father so frequently that his father had no evidence of decubitus ulcers.

To me, this patient had zero quality of life. He was trached, PEG-ed, bedbound, and incapable of following commands or communicating in any meaningful way. By comparison to my own father, he was a virtual corpse. But the patient’s son told me his father would want everything done. He said he knew this because his father would give him certain looks with his eyes or occasionally wiggle a toe. He said his father enjoyed watching TV; he could tell because his father’s pupils would change in size with different channels.

To the patient’s son, I posed my perspective that surgically revising his PEG would be an invasive and risky procedure only serving to prolong his father’s inevitable death. The patient had no hope for neurologic recovery. His son responded with volatile anger that I could possibly suggest murdering his father. He asked to speak to my attending because he wanted a different doctor. Here I was, 2,600 miles from my own dying father, making decisions that would ultimately result in the end of his life and advising my patient’s son to do the same. The son’s reaction made me question my own decision to forego my father’s PEG. It made me question my loyalty as a daughter. It made me question my compassion, my empathy, my medical judgment, and my intellect. I didn’t cry anymore that day, which seemed to confirm in my mind that I was heartless.

My father died later that week. I flew home to be at his bedside for his last 24 hours and I was back to work within a week, having more goals-of-care discussions. My patient had the procedure while I was gone. It went smoothly and he was discharged home in his loving son’s care.

I’ve now had a couple years to reflect and I often think of what I used to call “Daddy Time” as a young child, when my father would wax philosophical for what seemed like hours lying supine on his Slumber King mattress, hands folded across his chest. He would summarize his thoughts on Schopenhauer’s writings and quiz seven-year-old me on what I perceived to be the most painless way to die.

I don’t regret my decision to withhold the PEG tube. I still believe I knew my father well enough that I could make the best possible decisions on his behalf in his remaining earthly time. I also believe my patient’s son made the best possible decisions he could make for his father given the circumstances. We all have a unique perception of what it means to have quality of life and I can only hope that my patients’ families know their loved ones’ wishes best.

Jenny Jones is the doctor daughter of a librarian and an author, currently a PGY-2 resident in emergency medicine in Louisiana.