How Is A Sandcastle A Metaphor For Burnout? I'll Tell You 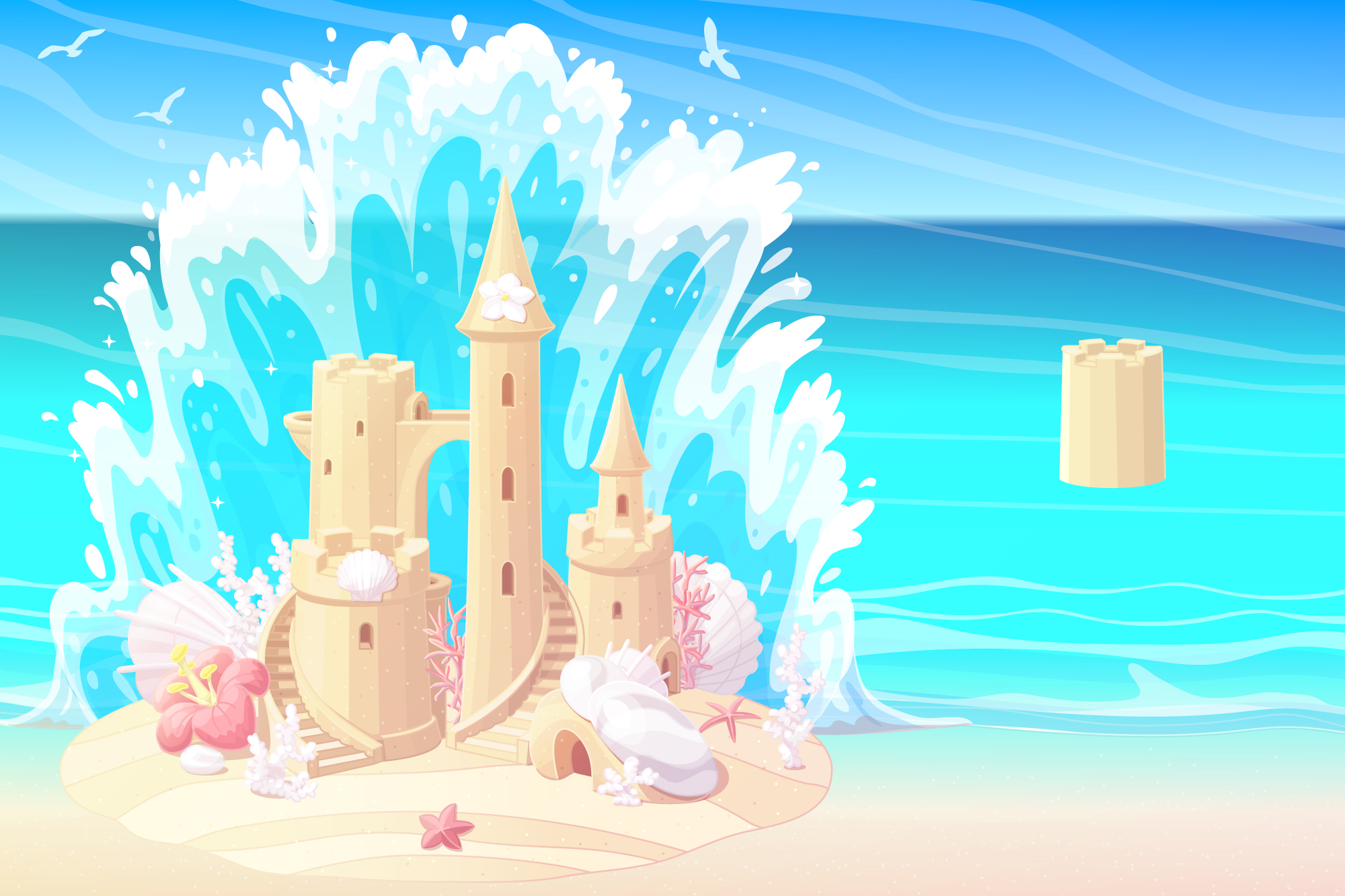 Going to the beach on the North Oregon Coast is an exercise in contradiction. No matter the season — even peak of summer — our family knows to bring the fleece jackets along with the sunscreen, the windbreakers with the beach toys. The weather is unpredictable.

But no matter the weather, my children ask to go at the turning point of low tide. They have a game they like to play. When the tide is beginning to come back in, they build their sandcastles on the edge of the waves. Then it’s a race to see if they can build up the castles fast enough to withstand the incoming tide.

This particular day, I observe their different strategies. One child works with slow and methodical diligence, silent and intent on his task. His castle is wide and sturdy.

The second child works in frenzies and pauses. Building up a narrow tower only to have it crash down with the next wave, then lamenting its fall — only to start over again.

“You’ve got to build up a base first,” the first advises in a patient voice from his position of relative safety, farther out from the tide.

The second ignores him, continuing his frantic strategy between each wave. But I can see the second child has started his castle too far out. From my vantage point, it’s clear that it’s a lost battle.

But he is determined. He puts his body between his castle and the waves, and uses his red shovel to dig like mad. I try to gently suggest he relocate a bit farther from the waves, like his brother. He presses his lips together in a firm line and shakes his head, digging faster.

His determination is contagious, and I can’t help but join him, trying to dig fast enough to build a wall of sand to protect his castle. To no surprise, we are no match for the force of the ocean, and the waves take out his castle time and again.

“Son,” I say, “let’s move up the beach, away from the waves. Closer to your brother. You’re too far out into the tide. There’s no shame in it.”

He refuses. It is hard to watch him continue to fight the foregone destruction. But I stand aside and wait. He will only concede defeat when the waves are too sustained and the waterline is too high, so that both castles lie submerged — when his brother shrugs his shoulders and moves on to another game.

Watching my children and their contrasting tactics in pitting their sandcastles against the rising tide, I thought about resilience, how it’s easier to have it when you’re outside the tide.

There’s been a boatload of discussion of resilience among the past year’s articles on physician burnout. But it’s like this: for some physicians, they are the castles positioned well out of the tide, with the wide, sturdy bases, that can withstand every seventh wave that sneaks higher than the rest (in Oregon, they are named sneaker waves). These well-entrenched physicians advise their colleagues around them, “Look at me, just build up your resilience, and you’ll be fine.” Hospitals have jumped on this bandwagon as well, incorporating resilience training as part of physician wellness programs — positing resilience as the solution to burnout.

But for other physicians, the forces have risen too high and too fast. Before they know it, they realize they’re drowning, trapped too far out in the tide.

What are some of these forces?

No matter how resilient the castle, if each wave is higher than the next, and there is no break to come, it doesn’t matter how sturdy the base, or how steady the repairs. Even the biggest, strongest castle will fall beneath that rising tide.

But perhaps the biggest factor that no one is talking about is that we’re not all on the same beach, nor the same distance from the tide. The game looks very different positioned up the beach, versus mired in the middle of the tide. It’s easy for the ones up the beach to withstand that sneaker wave, versus those who barely have their chins above water.

And like my second child experienced, it’s hard to admit to oneself the reality of the problem — instead blaming oneself and feeling one can and should succeed if one only tries harder — until and unless someone in a stronger position acknowledges it. Mentors have a duty to help mentees out of the tide, not pile on advice about being more resilient.

I think back to my internship, where we dreamed about “winning the game.” It looked like this: if you were on-call every fourth night, and you could discharge all your patients by the end of the third day, you could get a free day on the fourth day of the cycle. A day with no patients. We all worked like mad to win that game. And one glorious day of my internship, I did it. By evening of the third day, I had discharged my last patient. My co-interns clustered around me in jealous disbelief. My senior resident gave me permission to not come in the next day. In the middle of the week. Oh, glorious day.

It only ever happened that one time. But almost 20 years later, I realized, I’ve still been desperately trying to win the game.

For our entire careers, starting in training, we’re suckered into trying to “win the game.” Finish that last note. Clear out that last in-basket message. Complete the last piece of paperwork in the inbox. Make that last call to the insurance gatekeepers.

But the work is like the tide. It never stops. There can never be any real winners in this game.

One day, I asked myself: why am I still playing it? And I made a choice to not play this game for a while. To leave the beach.

Do some see me as weak? Of course.

Do others criticize that I should be “more resilient?” Most definitely.

Do those who’ve not yet experienced the true force of the tide doubt that it could be that strong? I’m sure they do.

But that’s OK. On this one, I’m paying attention to the lesson my kids taught me. It’s OK to admit when you’re beat by forces that are outside your control, and go play something else for a while. You can’t build up your resilience when you’re already submerged by the tide.

There’s no shame in it.

Please share any comments you have on resilience, burnout, sabbaticals, and related thoughts.

Dr. Jennifer Lycette, MD, is a medical oncologist in community practice for 13 years, the past six of which in rural oncology practice, and is currently on a sabbatical. She resides on the North Oregon Coast with her husband and three children. Her blog, The Hopeful Cancer Doc, includes her writings on practicing oncology, maintaining hope in medicine, work-life balance, and various other musings. Her perspective essays have been published in NEJM and JAMA among other journals. Dr. Lycette was a 2018-2019 Doximity Author and is a 2019-2020 Doximity Fellow. You can follow her on Twitter at @JL_Lycette. Opinions are her own.