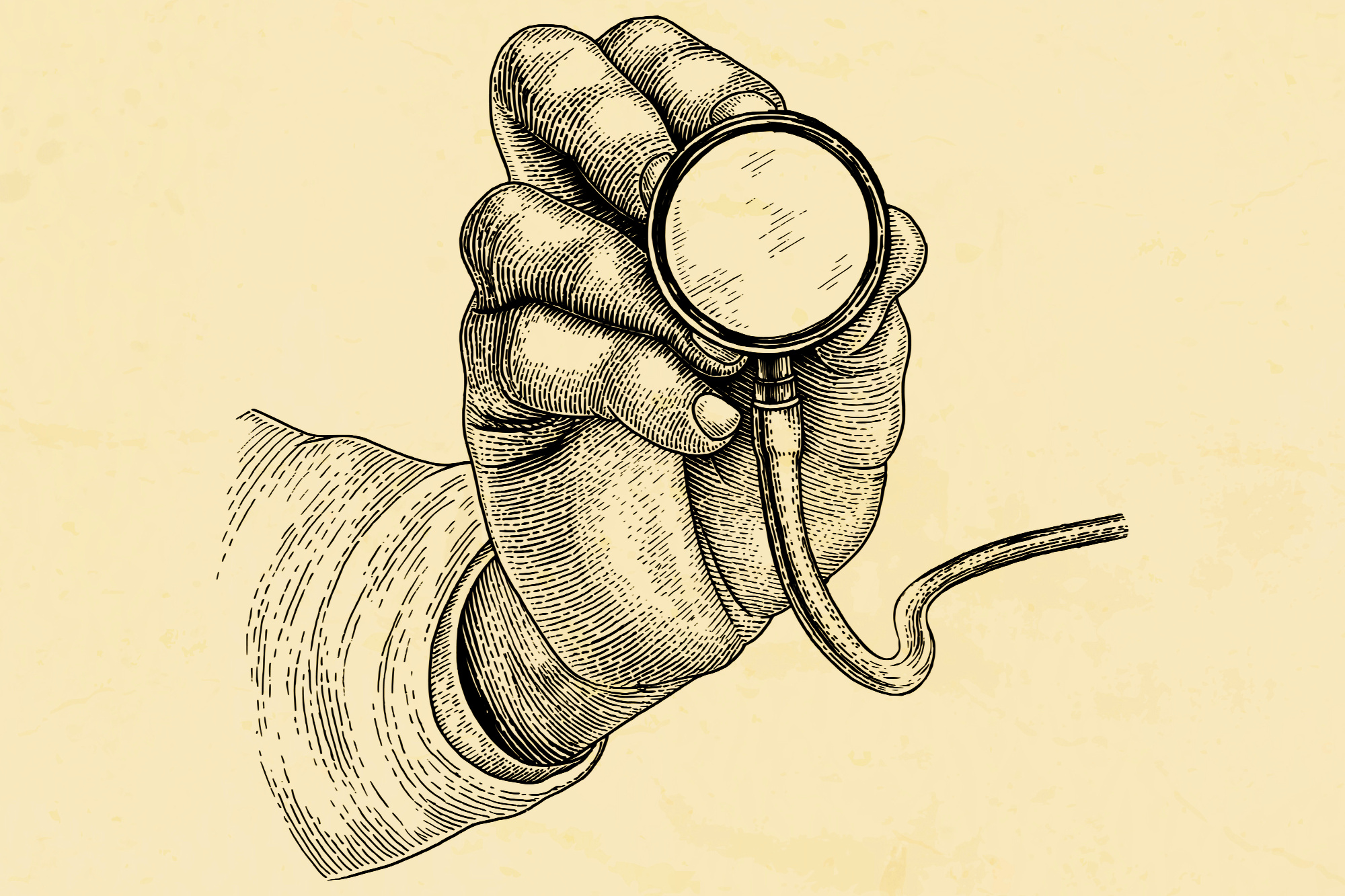 As he did this, I carefully listened through my stethoscope over each of his lung fields. I felt a little silly. We call this maneuver "whispered pectoriloquy" and use it to listen for any sign of pneumonia.

It is an old school method. Had I not recently graduated from residency, I likely would not even have done this at all. It was one of those things taught in medical textbooks but is rarely seen in clinical practice. Today, it has become the product of a bygone era when physicians would diagnose illness with merely the patient, the five senses, a few simple tools, knowledge, and reasoning. I had really just tried it out on a lark out of some sort of sense of formality.

He was an aging, honest, and hard-working machine operator who smoked too much. He was among the first patients I had been assigned to in my new practice after residency. I took care of my hospitalized patients at the same institution where I had been trained. He had come to the hospital early in the morning because of fever and chest pain. Initially, the man had been admitted that morning to the residents’ teaching service under the aegis of our most respected attending physician. This attending was an individual whom I admired greatly and hoped to emulate in my own practice. When the residents realized the man was my patient, they transferred him to my service that afternoon. I examined him that evening and he looked sick. The residents had given him the diagnosis of “fever of unknown origin” since all his labs and X-rays were normal despite his symptoms. As it turned out, the man’s affliction was a mystery.

Illness is often mysterious. A symptom presents itself, but the culprit responsible remains obscure and must be found out. The physician must look for signs that reveal the truth of the patient’s underlying condition. Physician Sir Arthur Conan Doyle knew this well and based his Sherlock Holmes character's sleuthing behavior after such diagnostic endeavors.

It is a frequently heard modern lament that the art of physical diagnosis is in decline in our high-tech age. However, it seems every medical institution still has a master clinician who singularly embodies the art of physical diagnosis. At our training hospital, it was this attending. He was frightfully bright, calm, focused, knowledgeable, and humanistic and often spurned lab tests and X-rays for bedside discussion and examination of the patient. A distant, austere man, he was nevertheless deeply committed to his patients. He would attend daily nursing report early in the morning to obtain the kind of intimate sense of his patients not provided by his harried residents. It was largely because of his influence that I was now at the bedside with my patient, sleuthing.

There were many possible explanations for fever and chest pain, but easily the most common diagnosis in this circumstance is pneumonia. X-rays may not show pneumonia initially, especially in a dehydrated patient, and intuitively I was suspicious.

There — I caught it! The man’s phonation heard through my stethoscope over his right lower lung field was louder than elsewhere, presumably transmitted better through fluid in that part of the lung. I went back and looked at his chest X-ray from that morning. There was indeed a large but faint density in the right, lower lung field that the residents hadn’t appreciated. I revised the man’s antibiotics, gave him some extra IV fluids, and the following morning repeated a chest X-ray. It revealed a dramatically worsened consolidation in the right lower lung: pneumonia. I briefly smiled to myself and felt satisfied over a small triumph.

As I walked out of the radiology department, I ran right into the attending. He had actually come looking for me. He told me that he had read my notes and seen the X-rays. He was a man of few words, but he spent several minutes apologizing for his residents' misdiagnosis. He himself had not looked at the initial chest X-ray, and he was genuinely penitent for the oversight. He congratulated me on a good pick-up, expressed his opinion that I was a good doctor, and then walked away.

Watching him go, I just stood there quietly and unexpectedly stunned. His revelation had caught me completely off guard. His spare words had struck me deeply. I was further surprised to find tears welling up uncontrollably. I then found myself experiencing something largely unfamiliar in all my arduous years of training: I felt capable. I was proud. Truth be told, in that instant, I felt like Hippocrates himself. Somehow, it seemed to me, I had just been given something. An inclination that had been brewing within me for a while was in that moment finally completed. I sensed somewhere inside this cementing a strength of commitment and a love of the art of medicine. I was visited by a deep excitement.

As I slowly turned to commence my way to my physician office, I discovered that my steps were pleasantly buoyed by an unbridled sense of hope and joy that gently lengthened my stride.

Eventually, upon later reflection, I took all this unexpected fervor to be a sign.