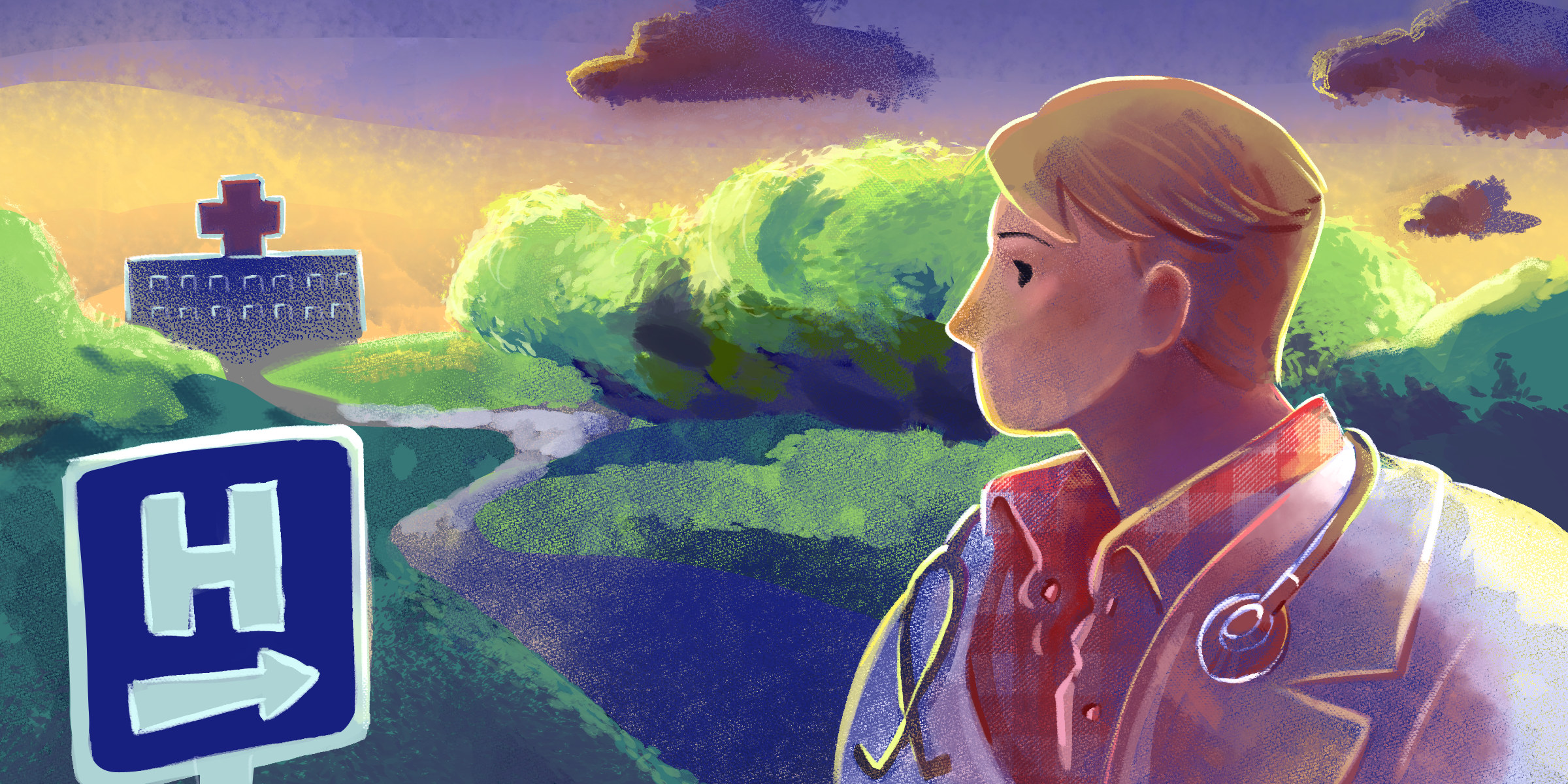 ﻿My patient is middle-aged, morbidly obese, with undiagnosed (until now) alcoholic cirrhosis, and a vaguely documented history of cardiac disease — per the chart “noncompliant” with medications. “Noncompliant” in this case turns out to mean he had no insurance and couldn’t afford the meds.

He arrives at my office eager to start “curative treatment” for the cancer — diagnosed in the local ER after presenting there with longstanding severe symptoms. From there, he was transferred to the tertiary center two hours away, only to be discharged with a referral to see me in my clinic — closer to his home. I am a rural medical oncologist.

He is seated in an extra-wide wheelchair, clothing and grooming consistent with what we were taught in medical school to objectively describe as “disheveled appearance.” The story in the medical records leaps out at me. Due to his comorbidities, the surgical team did not feel he was a medical candidate for standard staging, which would have involved an invasive procedure. They deemed him medically inoperable but recommended an intensive regimen of concurrent chemotherapy and radiation therapy. The discharge summary states unequivocally they have nothing more to offer him.

I ask him what he understands from the hospitalization. He doesn’t hesitate to tell me. He expects he will be cured with chemotherapy and radiation therapy and is anxious to get started.

He is soft-spoken and polite and desperate to be cured. I wish I could tell him that he will be.

The records reveal abnormal kidney function. Yet he does not have any knowledge of having kidney disease. I repeat his labs, and kidney function remains impaired. Worse, liver function tests (LFTs) show signs of liver dysfunction, too.

I pore over the hospital records to find prior LFT results. There are none. I track down results from two years prior (the only other available labs in his records) and discover liver function was abnormal even then. I go back to the inpatient imaging report and discern a line buried in the descriptive paragraph — cirrhosis of the liver. None of this is mentioned in the discharge summary.

He admits to heavy alcohol use in the past but swears he quit years ago. Nonetheless, the irreversible damage has been done.

In this initial medical oncology consultation, I thus find myself not only addressing his cancer diagnosis, but being the first to diagnose him with alcoholic cirrhosis, hepatic dysfunction, and chronic renal failure. All diagnoses seem to shock him as much as the cancer.

I explain as gently as I can that even if his disease is stage 3 (my best clinical estimate from the limited available data), I do not think he is a candidate for aggressive treatments because of his comorbidities. I am also worried that the cancer could, in fact, be a stage 4, and explain we need to determine the proper staging to determine goals of care. His kidney dysfunction precludes an IV-contrast CT scan, and I recommend a PET/CT scan. Alas, his body habitus is too large for our mobile PET/CT scanner.

My team gets on the phone and finds a facility an hour’s drive away that can accommodate his weight. We pull strings to facilitate an urgent appointment. Only to later find out he didn’t show up — he didn’t have transportation to get there. I wish he would have told us beforehand so that the social worker could have arranged medical transport. But I think he was too ashamed to tell us.

In the meantime, my radiation oncology colleague informs me his body weight is too heavy for the linear accelerator table. Once again, his comorbidities hinder his ability to receive standard treatment. For the machine to bear his weight, he would have to lose over 50 pounds. I call four other radiation oncology centers — all those within a 150-mile radius — they all have the same weight limitation.

I wish my metro colleagues would have picked up the phone and called me before promising treatments that cannot be delivered. But I am only the rural oncologist.

The patient is devastated. He has attached his chance at “cure” to the radiation therapy. I will later learn from his partner that he will refuse nutrition in a misguided attempt to try to lose the weight fast enough to be treated.

He becomes tearful when he tells me the story of his initial diagnosis, how one physician implied they were in disbelief he could present with such advanced disease — yet “still be so obese.” I wish that colleague hadn’t inflicted body-shaming on top of devastating news. I sense that my patient’s life has been filled with all too much shame and suffering.

I wish he had presented to care earlier. All I can offer now is a path to try to minimize more suffering. I recommend hospice.

I wish his tale were unusual, but it is all too common in this rural region. A patient with no primary care provider and limited socioeconomic resources waits until the symptoms of cancer are so severe that they present in crisis to the ER. An imaging study is done, and the patient is given the diagnosis of cancer in the ER — a situation distressing for the physician in the ER as well. The patient is transferred to the tertiary hospital and stabilized, only to have it determined they are not a candidate for any intervention qualifying them to remain at the tertiary hospital. The discharge wheels move all too quickly, and the patient is sent home with instructions to see me in my clinic. I am put in an impossible position — expected to deliver treatments that, while perhaps textbook, are not safe nor feasible to carry out in the face of advanced comorbidities and limited resources.

Like most rural areas in the U.S., the population has disproportionately high rates of obesity, tobacco, and alcohol, and thus, disproportionately high rates of cancer. Lack of insurance coverage is a common barrier precluding preventive care. I wish I weren’t the first outpatient physician that many of my patients see in their adult lifetimes, and sadly, the last as well.

I wish I could go back in time. To understand and intervene in the factors that led to my patient’s current conditions. The alcohol. The morbid obesity. The self-neglect. I wonder what his early life was like. His childhood. Like so many other patients I see in this rural region, the cancer is only the final manifestation of a lifetime of poor health. I cannot administer the same treatments that I could to a robust cohort of people with the same disease. It is not the same disease. Cancer ravages exponentially in conditions of poverty. My patients suffer exponentially from a lack of resources. These are things I cannot fix. I have burned myself out trying.

I wish someone could have interceded earlier in his life. I wish the politicians and policy-makers could see the suffering that I see every day. But these are impossible wishes, and nothing will come of them. I am only a rural oncologist.