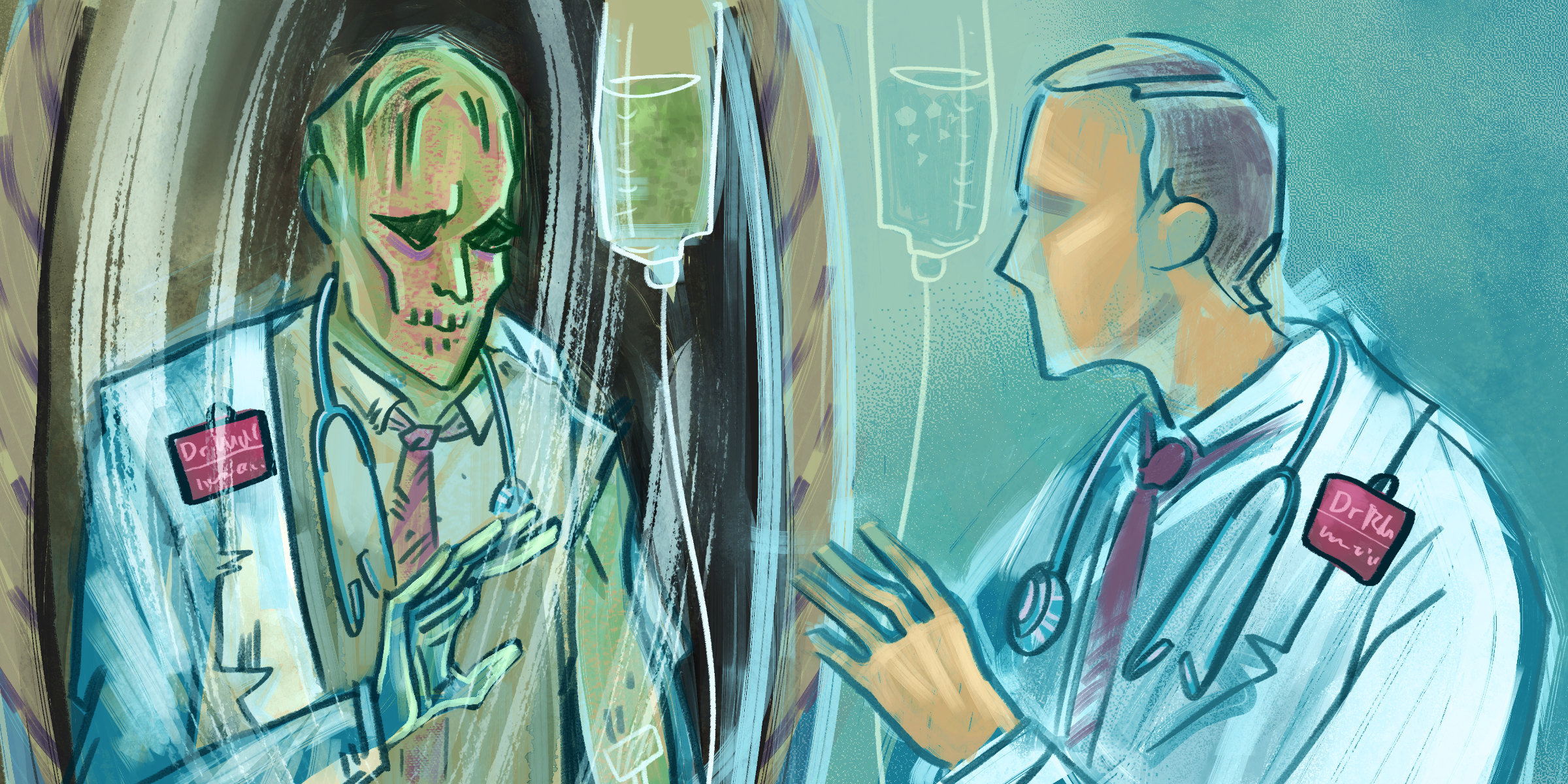 ﻿In medicine, we often communicate with brief, stock phrases that are substitutes for longer, time-consuming descriptions of people or situations. Some, like “code blue,” are known to the general public, while others are only fully appreciated by professionals, such as “toxic-appearing.”

This is the story of one such phrase. It’s a phrase we use all the time, and it was used to describe me as a patient. Context is everything.

In the spring of 2016, I had a heart attack. In the cath lab, I flipped into a tachyarrhythmia that couldn’t be converted and went into cardiogenic shock. My heart rate was so high that a balloon pump could not keep up, and to maintain my cardiac output, I was placed on an impella pump. For those who don’t know what an impella pump is, it’s a device inserted through the femoral artery that rests in the left ventricle and pumps blood out through the aorta in cases of cardiogenic shock. Although it is meant as a temporizing measure, I was so sick that I was sent from the cath lab to the coronary care unit (CCU) with the impella pump still in place.

The impella saved my life, but the device comes with well-known side effects. It can lead to blood clots, so I was heparinized. The severity of my condition necessitated a Swann-Ganz catheter, an arterial line in my left wrist, a central line, and a peripheral IV. I also had compartment syndrome, precipitating a fasciotomy on my lower left leg, which was still open with a wet wound dressing on it. The impella also causes hemolysis, requiring frequent transfusions. I had also been fluid-restricted, and under-nourished, so by the time I reached the CCU, I was anemic and even thinner than usual (I entered the hospital at about 135 pounds).

In the CCU, I was intubated and heavily sedated, and promptly developed acute kidney and liver failure. Over the next few days, my survival was in doubt. On my fourth day in the CCU, I started to turn the corner, and I was able to come off the ventilator after one week.

During the time I was intubated, my family and friends visited — but of course, I was so sedated that I have almost no memory of that time. Once I was extubated, awake and sentient again, I had a flood of people coming to see me, from friends and family to professionals wanting to assess me. Everyone who came to see me during those few days, and I mean every single human being who came into that room, all said the same thing: “You look good!”

We all use that phrase, and it carries a lot of meaning, usually signifying a hale, hearty state of good health and a robust appearance.

Conversely, “I saw Jack before his chemo today — he does not look good,” suggests I should visit Jack soon and consider sending a prayer card.

Suffice to say, I was baffled by the use of this phrase by those around me, pertaining to me. To recap, at this time, I was:

Given all of that, the overriding question in my mind was: What the hell did I look like two days ago? If I look good now, how much worse was I then? Was I actually dead before, and after successful revivification, I am now a not-totally repugnant zombie? I was glad to be alive, but I certainly didn’t feel good. In fact, I felt like I had been chewed up and spit out by the Kraken.

However, all the testimonials about how good I looked, some of which were delivered with an air of surprise, were a revelation for me. I quickly realized that if my present oozing, smelly, weak, barely-alive state was an improvement, then I was truly grateful for where I was. So even if only “looked good” because I no longer looked like I was dying, I graciously accepted the assessment.

As a writer, I value precision in the words we speak. When patients tell me “it hurts,” I want to know where it hurts, how it hurts, and how long it’s been hurting. But I still think there’s a place for seemingly vague phrases like this one. While “You look good” certainly lacks in specificity, it does communicate a lot, and in just a few words. Whether in medicine or in our daily life, these kinds of phrases can convey a gestalt succinctly. Though, as my case illustrates, when we say, “You look good,” it almost always begs the question: compared to what?

A practicing pediatrician for over 26 years, Dr. Ruben J. Rucoba currently serves as Director of Medical Services for PediaTrust, a large pediatric "supergroup" in the Chicago area. He also established his own thriving medical writing and editing business in 2010. He has no conflicts of interest to declare. Dr. Rucoba is a 2019–2020 Doximity Fellow.