The Silver Lining of My First Patient Death 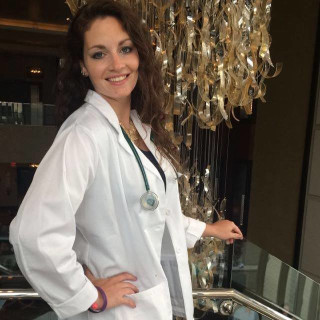 Op-Med ran the “First Stab” contest in February 2019. We are excited to announce this as the winning piece.

On a beautiful Saturday morning in September, my surgical team buzzed with energy as we settled into the unfamiliar environment of Children’s Hospital New Orleans. Taken from our world of adult medicine for this case, the whimsicality of painted butterflies and rainbow floor tiles felt painfully out of place next to the anesthesia equipment in the sterile OR suite.

I grabbed gloves for myself, my resident and our attending, told the scrub nurse I was a medical student, gave her my ID badge for the chart, and answered texts for my resident before I scrubbed in. Somehow in the middle of all of this, our tiny patient had found his way to the table.

It all looked too big for him, too harsh: the ventilator tubing underneath his freckled nose and chubby toddler cheeks, the full-sized table holding his fourteen-kilogram body, and the surgical tape holding his little eyelids shut.

“Are we ready for timeout?” The circulator called. The activity came to a halt as her voice took over where the chaos had left off. “... Procedures to be performed include en-bloc nephrectomy, hepatectomy, and removal of his heart for donation. UNOS ID has been verified. Lungs, pancreas and small bowel will be procured for research. We will take a moment to thank this patient here today for the gift of life he’s given to others ...”

The surgeons stood motionless over the table as she continued, “His mother wrote something she wanted to have read to y’all before we begin.” And out poured a mother’s grief in her note: an attempt to get us to understand who her little boy was before we operated. He loved horses, and playing outside on his daddy’s farm. He had an older brother and he loved to tease him when he played video games. He was their sweet boy whom they’d had too short a time with — their angel now.

I blinked back the tears that my sterile hands couldn’t touch. The deafening silence dragged on forever, punctuated only by muffled sniffling to let me know I wasn’t the only one.

Finally, we began the procedure, and I thankfully couldn’t dwell on the letter once we were underway. With three attendings and three residents assisting, two scrub techs and a rep from the Louisiana Organ Procurement Association around the table, it was a full-time job trying to retract/assist correctly, not be in anyone’s way, stay sterile, and answer questions about the vessels that supplied the adrenal glands.

Amongst this chaos, there was a point where the cardiac team cross-clamped the aorta, and removed our patient’s walnut-sized heart from his chest to take back to a very sick child in Nashville. Meanwhile, we stayed hard at work preparing his kidneys to be given to an adult recipient. My fingers were numb from gently retracting his small bowel against the ice they poured into his abdomen, and the surgical field was obscured with preservative fluid instead of blood. But it wasn’t until I looked up toward the head of the bed that it became real.

The anesthesia team was gone.

The monitors were black and the hiss of the ventilator had long been replaced with silence. There was no need for pain control, hemodynamic monitoring, respiratory support or paralytic agents because our patient had passed away.

The first patient I’d ever seen die in front of me had gone with a whisper in the middle of a hectic OR. There were no chest compressions. No pushes of epi or frantic haste to save his life. No one yelled “time of death — the circulator simply recorded the cross-clamp time instead. In reality, his death occurred long before he got to the OR when he’d been declared brain-dead. And as we stayed through the closure, all while working with the same precision and sense of urgency that we did with any other patient, it felt like his death occurred long after the time of cardiac death as well.

Later that afternoon, the crossmatch was complete and I walked our recipient to the OR back at our own hospital downtown. She was a small woman in her early 50s who’d lost her kidneys to pyelonephritis. She took deep breaths with her eyes closed as we waited in the pre-op area.

“Are you nervous?” I asked her.

She shook her head. “I’m ready,” she said gesturing to the scars from old fistulas that covered her arms and legs. “I’ve been waiting for this day for eleven years.”

When we unclamped our donor’s tiny renal arteries hours later, I watched his kidneys turn pink. As our patient’s blood coursed through them for the first time, it felt like his death brought both of them back to life.

Colleen is currently 3rd year MD/MPH student at Tulane University School of Medicine who is interested in pursuing a career in academic surgery, and exploring public health, writing, and research opportunities. In her free time she likes dancing, practicing yoga, Crossfit, painting and exploring New Orleans.