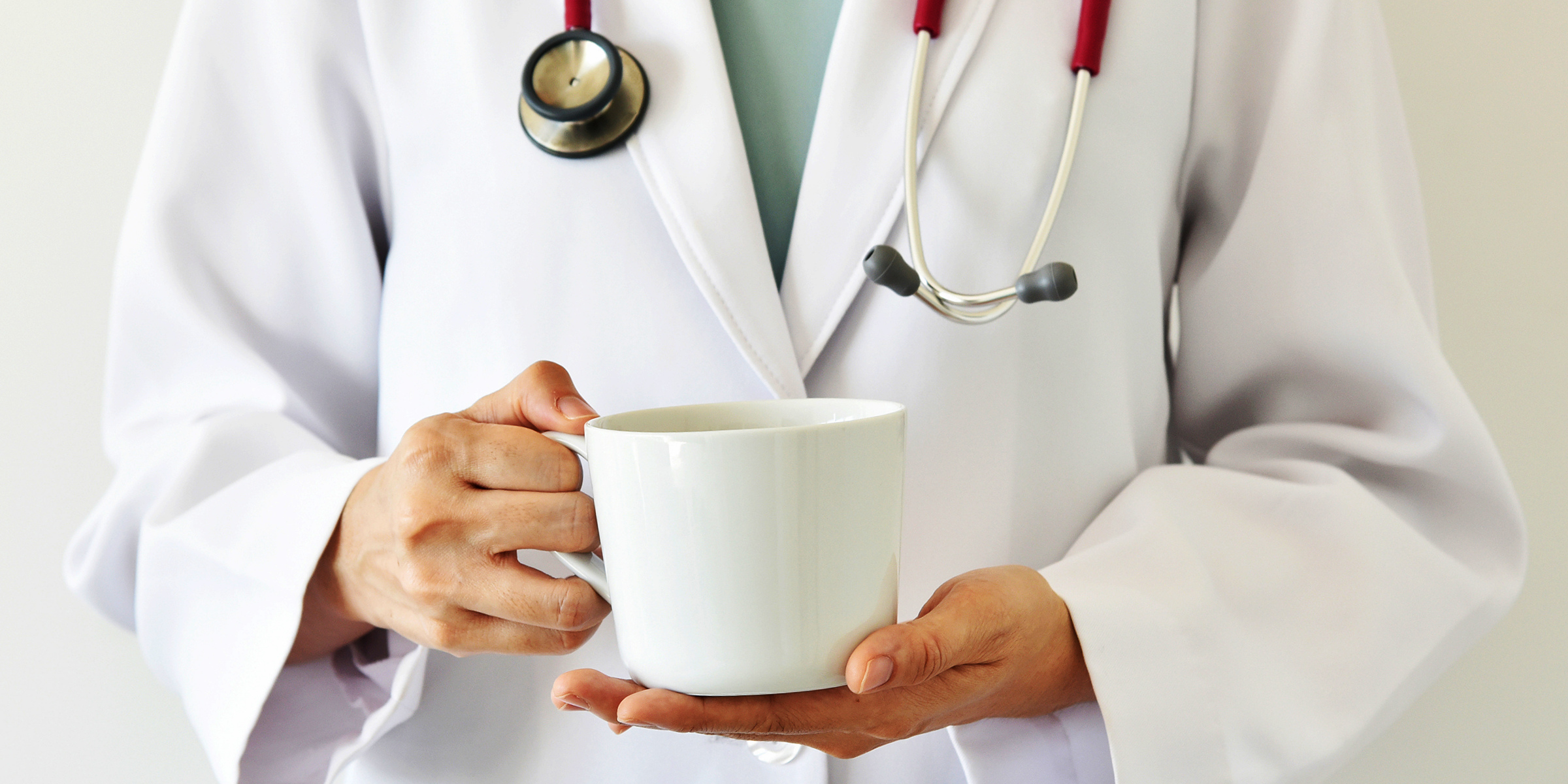 ﻿A rectangular plastic package slides into the machine’s waiting mouth. “Hazelnut” can just be glimpsed atop the package in italicized font as the mechanical door snaps shut. A steady whirring and clicking emanates from the confines of the machine. After a span of seconds that seems to last for an eternity, a burst of black liquid gushes from the spout. Visible steam and audible splashing emanate as the black liquid crashes into the base of a round, white Styrofoam cup waiting beneath the mechanical door. My fingers clench the familiar, soft feel of the cup. Swirling steam rises to meet my nostrils, a familiar aroma of impending alertness. My lips make first contact. As always, that first sip is far too hot for sensible human consumption. But I take it anyways, followed by a quick second. I feel the warmth progress down my chest and settle in my core, and I release a warm exhalation of satisfaction. It is 5:30 a.m. Armed with my pre-dawn libation, I am ready for morning rounds.

At the computer I embark on a familiar routine. The patient list emerges as I click the mouse, type on the keyboard, and sip the coffee. I peruse the morning tasks, making note of necessary neurovascular checks, surgical dressing changes, and pre-op consents. Click. Type. Sip. I pull up lab values, scan vital signs, and check if that MRI order from two days ago finally got done (still no luck … typical). Click. Type. Sip. Moderately satisfied, I hop off the chair, grab the Styrofoam cup, now half-full of black liquid, and march upstairs to round. Sip. Sip. Sip.

I survive (yet again) the onslaught of rounds and return to the safety of the surgeon lounge. I don my lead apron, necessary protection for orthopaedic surgeons from the constant assault of intra-operative X-rays. Wearing my apron, I almost feel like a knight going into battle. A really lame battle. And a knight who needs a second cup of coffee just to maintain base human functions. And it’s only 6:50 a.m.

Now, armed with the second fabled elixir of inexorable aftertaste, I sit and compose my operative plans for each of the day’s cases. On pilfered computer paper, I sketch rough drawings of fractured bones, degenerated joints, and deformed limbs. I draft bullet points outlining the surgical plan of attack. I underline key steps and crucial neurovascular structures likely to be encountered. On the back of each paper, I draw the final envisioned fixation construct, labeling the location of plates, screws, rods, and pins. It’s now 7:15 a.m. The attending surgeon will soon arrive for the start of the first case. I throw a third pack of grounds into the coffee contraption as I saunter over to the attending’s computer and tape my operative plans to the screen. If you want to operate, the attending has to trust you. So, I force them to see my plans. They stand as proof that I have thought out the approach, structures at risk, contingencies for the unexpected, and final desired outcome. My third Styrofoam cup is clutched in my hand, a shield of defense, as the attending thumbs through my amateur artwork and we cursorily discuss the coming cases.

The first case finishes as expected, no deviations from the plan. In the turnover time before the next surgery, I scurry back to the surgeon lounge. It’s 10 a.m. I have to use the bathroom with a force as yet un-witnessed this side of the Prime Meridian. In homage to the caffeine deities, I throw a fourth pack into the coffee machine on my canter to the commode. Emerging like a phoenix birthed anew, I grab the fourth cup of white Styrofoam-encased fuel and proceed to knock out post-op orders in a rapid, robotic fashion. I briefly allow my brain to contemplate the deleterious effects of my excessive caffeine intake. But I quickly expel such frivolous musings from my mind. It’s time for the second case.

It is well known that sleep deprivation, stress, burnout, and similar negative emotional and psychological states are commonplace during residency. This by no means makes it acceptable. It is simply a matter of fact, and residents augment the aforementioned aspects of the training tenure however they deem fit. In my case, I consume excessive amounts of coffee, knowing full well that averaging six to eight cups a day is ridiculous and unsustainable long term. And I am not alone. In the United States, 43% of workers say they are less productive without coffee — and it should come as no surprise that nurses and physicians take the top spots (#1 and #2, respectively) of all working professionals in terms of feeling unproductive without coffee. That said, coffee is not without its benefits. Numerous studies have shown a decreased risk of colorectal cancer, protective effect against developing Parkinson’s Disease, reduced risk of cardiovascular disease, and lower risk of developing chronic liver disease. (A word of caution is advised, however, as some meta-analyses have shown that the ultimate effects of caffeine are still inconclusive.)

When specifically looking at caffeine consumption, an average 8-ounce cup of coffee contains 95mg of caffeine. The Mayo Clinic recommends no more than 400mg of caffeine daily, which equals about four cups of coffee. However, one must bear in mind that brand name chains like Starbucks offer far more concentrated infusions (a Starbucks 8-ounce clocks in at 180mg of caffeine). With respect to physician consumption, one study found that male doctors consume more coffee than their female counterparts. Further, surgeons consume more coffee than other physicians, and orthopaedic surgeons are the highest consumers in the entire hospital. It seems that my predilection for the “black medicine” is quite in line with my fellow bone cutters.

Ultimately, whether safe, deleterious, or hovering in the purgatory of neutrality, regular caffeine intake is a reality for most doctors (and for most people across the globe). As my miraculously still steady hand lifts the sixth daily cup to my lips, I wonder how mass consumption of this drink came to be so prevalent. And how is it affecting our modern health care system?

What do you think? Do you drink coffee on a daily basis—or function without it?

Adil Shahzad Ahmed is an orthopaedic surgery resident at the University of South Florida in Tampa, Florida. He is interested in offering a lens into the life of a doctor and surgeon. He also runs a website, which provides advice and personal anecdotes to college and medical students on their journey to becoming physicians.