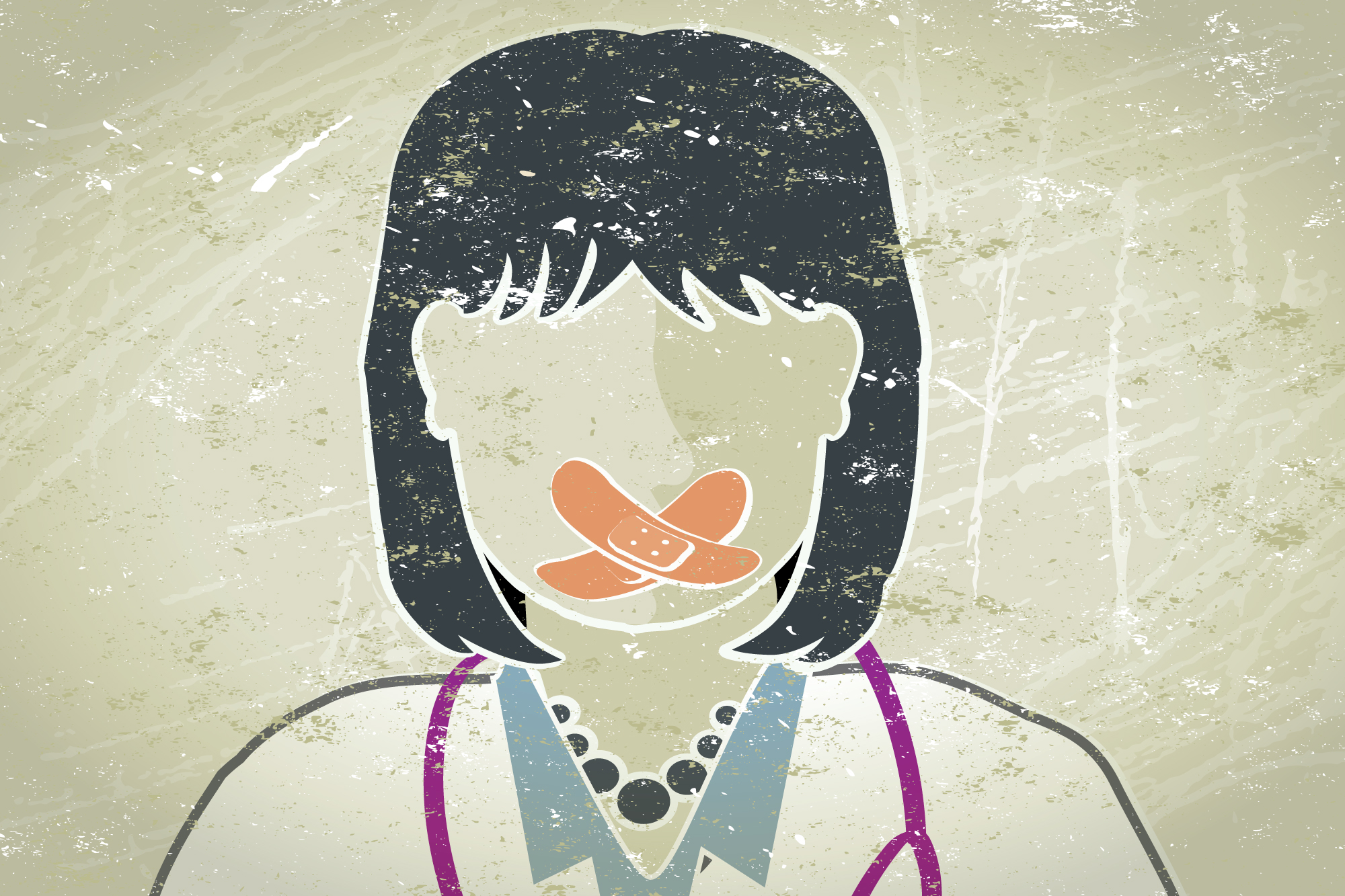 If no one is around to hear it when a woman screams in the forest, does it make a sound? This koan is age-old and has given me much pause over the years as I have considered the ebb and flow of my voice.

Growing up as a child of immigrants, I was keenly aware of how the Indian culture viewed women as docile and subservient — a woman is first a daughter, then a wife, then a mother — always defined by those around her. Luckily, my parents were strong and taught me to depend upon no man and always reach for the highest bar. However, navigating those cultural experiences taught me that being quiet and speaking “only when spoken to” were proper virtues.

Navigating the field of medicine was fraught with social challenges. I recall my days in medical school when male physicians recognized me by my “big, brown eyes” or my smile instead of by my quick wit or good clinical acumen. I remember being a resident in training, already an MD, and smiling a lot to make sure people didn’t feel that I was too strong in my opinions — too forthright. As young female doctors, we often overcorrected and bordered on sounding “ditsy,” so as not to sound “too smart” or “too imposing” to our colleagues. We used to remark amongst ourselves that we had to do this only because we were women; our male counterparts never struggled with any of it. But we did what we had to do, as women. ﻿﻿﻿﻿﻿﻿﻿As a cardiology fellow, I was lucky to have had another female comrade, a rarity as only 20% of cardiology fellows are women. I remember that often patients mistook me for the nurse. I remember being the senior doctor in the room telling a patient his diagnosis and plan and that same patient looking to the male members of my team to make sure they agreed with my plan — to validate me.

As a practicing cardiologist, new challenges arose. I have been offered salaries lower than male counterparts. I have had moments where, after presenting cases in a room of men, a male physician whispered in my ear that I “looked sexy” while I was presenting. I have been asked why I need a lock on my door while I am nursing and pumping milk at work. I have been told that the women’s pumping room is in the obstetrics ward and that it would take me “only 10 minutes” to get over there. And now, three kids later, there is the constant pull from my senior male physicians telling me that there can be no leniency for going home for children, for taking less intensive care call — that everyone has children and we all have to chip in. Still today, I ignore the comments from patients about how pretty I look and overlook being called “honey” or “sweetheart.” Once, I remember having to explain to my physician colleague why I didn’t have lunch with the rest of the “guys.” I said that I did my work during lunch so I could get home earlier because I didn’t have a wife at home. He responded by saying, “Well, no one told you to go into this field.”

The rage slowly builds. It is insidious. We women so often scream in private so as not to appear outwardly — what? “Difficult.” “Unreasonable.” “A typical woman.” “A bitch.” If we scream in the forest, and no one is around, does anyone hear us?

The latest statistics show that although women are often more communicative and competent doctors, only 12% of board-certified cardiologists are women. Survey data assessed why women do not go into cardiology and found five barriers; namely: radiation exposure, sex discrimination, family planning, lack of advancement, and disparity in compensation. Women are more likely to avoid invasive cardiology specialties to avoid radiation exposure and are more likely to avoid family planning while exposed to radiation. Women are also often unaware of radiation safety precautions for pregnancy. It is also often tricky to point out that we need extra radiation protection during our first trimester, when 20% of women miscarry, because it makes it clear to everyone that we are pregnant (and the pain even more acute if there is a miscarriage).

Women experience sexual discrimination and discrimination about parenting. Sexual discrimination comes from all levels of staff, patients, and senior administration. Women cardiologists are more likely to be single and less likely to have children. Women choose noninvasive specialties to avoid the night call that comes with invasive subspecialties, barriers to making it home for children. The choice to be a noninvasive specialist often justifies the pay discrepancy of $37,717 for private cardiologists and $33,749 for academic cardiologists. And these trends are not changing. Even in the newest professional life survey, the barriers that women faced 20 years ago still persist today.

Beginning when we are young, we are told that women should be calm, cool, “put together,” humble, and quietly smart. With the rise of women’s liberation, we are also told that we are as good as any man. Of course, there is no question about that. I chose a challenging career that few women go into because I knew that I could handle it and that I was as good as my male counterparts were (and likely better). But what has taken me 10 years of practicing as a cardiologist to realize is that although we are as good as men, we are not equal to men. We are not the same. As women, we carry babies and we often do the bulk of raising them. We manage households — often doing the cooking, grocery shopping, and cleaning. We arrange the camps, the tutors, the playdates. These are our roles. We are taught to aspire to work in the structure that has been created by our male counterparts, and it is only when we shine in their world that we are seen as equal. But we are not equal.

We have more to consider than men, and those considerations need to play a role in how we practice within our field. Modifications need to be made, not because we are weak and cannot handle the work, but because we have more responsibilities that are equally important. For so long, we women stay outwardly quiet, with an inward rage that builds. We scream to each other — but in the quiet of the woods where no one can hear us. No More. We need to start screaming in places where people can hear us. Because I am a cardiologist. But I am also a mother of three beautiful children whom I share the care of equally with my husband. I am also the primary household provider. I do the bulk of the cooking, cleaning, and organizing. And I am proud of these roles. I deserve not to be told at work that I have to “chip in.”

When will the world hear our voices? I, for one, am tired of screaming in the woods. We, as women, need to stand together, without fear of retribution and tell our stories. These stories are important! We need changes to make our lives and the lives of our daughters better — as women, as doctors, as mothers.

This Will Change Your (Medical Professional) Life

Choosing More Wisely On Back Pain