“You are the most hardheaded person I have ever known!” The joy emanating from Dr. Ronald Verrier as he said these words betrayed his warm affection for my more-than-occasional obnoxiousness.

And then he giggled. His 6-foot-3-inch frame shook as he grinned and giggled. He was serious; I really was that hardheaded. But it was OK with him, as long as I was using it for good.

I was a chief general surgery resident at the time of this proclamation by my program director. A year and a half prior, I had told him I planned to apply for an abdominal transplant surgery fellowship, and he thought I was insane. He told me I would hate the politics of academia. He warned that I needed to do research first to go into such a field. And he rather thought it was a “no-good, pretty bad idea” because, as flagrantly exasperating as he knew me to be, he also knew me to be pathologically empathetic and firmly tenderhearted.

But still, I charged forward. He first learned of my great sadness when he read the personal statement of my fellowship application. Perhaps it all made sense to him then — my intense desire for my patients to feel safe, my obsession with potassium and hypoglycemia and fixing what was broken, and my pertinacious nature. He probably wondered how my tender heart survived the loss of my best friend as she awaited pancreas and kidney transplants.

Regardless, he jumped aboard and supported my aspirations with gusto.

We were a small program: three residents per year at most, and my class was not one of those at-best years. My scheduled one-month transplant rotation was cut short after one week. I begged and pleaded and insisted and demanded a real rotation for my chief year. I had already matched into the fellowship; the problem was that my technical experience with transplantation was limited to a single kidney transplant. As the master schedule maker for my chief year, I continuously inserted my attempts, but hit wall after wall. Eventually, I accomplished the seemingly impossible: I procured transplant rotations and made them work with the schedule.

That was the day Dr. Verrier gave me the aforementioned title. As I look back on that day, I surmise, and hope, that it was pride rather than simple joy that was emanating from him. Hindsight is 20/20.

In June, Dr. Verrier gave his congratulatory speeches for the graduates of 2019. He said several really nice things, as well as a more diplomatic version of his comment about me being hardheaded, which made my mom cry. I proudly introduced my graduation ceremony guests to my dear program director. Every once in a while, foresight is 20/20.

Then in March 2020, COVID-19 hit New York City. As the city shut down, the hospital switched gears. It was impossible to continue safely transplanting patients when our hospital was gasping for air amongst the deluge of patients suffering from this formidable virus — and it was all hands on deck.

I was watching a man struggle to breathe and coordinating his intubation when my phone began ringing incessantly one day. It was after helping the patient that I found out Dr. Verrier had succumbed to COVID-19 on April 8, 2020.

We use “succumbed” so easily in the medical field. But I can’t see my giant-of-a-surgeon mentor yielding to this awful disease. He laughed in its face as he treated patients with it; he felt it but sparred with it. He thought he was winning, as he had won so many battles before. He was a trauma surgeon; he knew how to fight the good fight.

And yet, he lost.

And I lost him.

As it turns out, he was my surgical compass. All the doubts he’d had about me and transplant surgery suddenly gagged me. All the nice things he’d ever said to and about me were outside my grasp. I couldn’t remember all the reasons why he thought I’d make a great transplant surgeon. I only knew my tender heart was again broken, and this mentor of mine who knew me so very well was gone.

I forgot for a moment that this man — for whom the country mourned as eulogies were posted by the likes of Katie Couric and news reports were read by Gayle King — giggled as he told me I was the most hardheaded person he had ever known. It’s odd to have your private grief be on the morning news and on so many peoples’ Instagram feeds. It’s difficult to reconcile the reality that it’s still yours when it’s everywhere, that he wasn’t just this hero of COVID-19, he was your personal hero. I had planned to be able to call Dr. Verrier for advice (in conversations full of laughter and yelling) for at least the next 20 years. And it was devastating not to be able to anymore.

A few weeks later, on my last COVID-19 MICU shift, I had a very complicated patient. I ached to call Dr. Verrier. I could almost hear his voice, but I couldn’t make out any words. Why hadn’t I written down everything he ever said? Why hadn’t I foreseen what would challenge me in my first difficult situations in an attending role and gone through these scenarios with him? Why hadn’t I asked him if he thought my tender heart was really strong enough to make it as a transplant surgeon?

And so I pulled out the video of his graduation speech. I watched him tell the audience that he had tried to talk me out of transplant surgery, and I leaned in as he spoke of changing his mind. Pride was there, but there was no doubt. His only request, in his absolute certainty that I would accomplish what I wanted, was that I always remember my home. In hindsight, he just wasn’t aware of how much I wanted it when he tried to dissuade me — because, after all, I was the most hardheaded person he had ever known.

What positive memories do you have of your medical mentor? Share your experience in the comment section below.

Holly Foote, DO, is an abdominal transplant surgery fellow at NYU Langone in New York City. She completed her general surgery residency at St. Barnabas Hospital in the Bronx under J. Ronald Verrier, MD. She enjoys reading, writing, and marking things off her eternal to-do list.

Read The First Time I Drowned in Patients 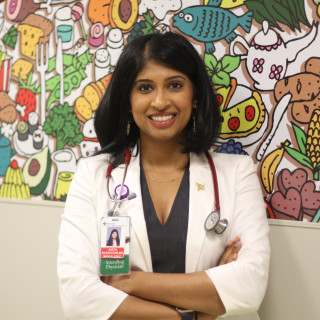 The First Time I Drowned in Patients

Read How Are We Going to Curb the Rising Rates of Maternal Mortality?
Link to Jennifer Franks, MD, MPH's page

How Are We Going to Curb the Rising Rates of Maternal Mortality?

Feb 14, 2020 Link to How Are We Going to Curb the Rising Rates of Maternal Mortality?