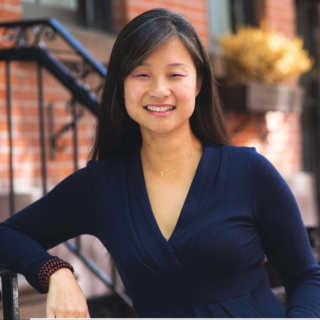 I actually didn’t want to be a doctor. My dad’s a doctor, and out of the four of us, I was appointed the future doctor. (The others became a lawyer and a professor.)

The story is as clichéd and iconic as its American counterpart tale of rags-to-riches: the Asian American child who saliently followed her parents’ wishes and carried on the family name. Although I did do so with much adolescent fanfare through multiple pleadings and yelling matches with my parents. In college I toiled away in my pre-med and major classes (Biochemistry & Molecular Biology) while secretly enjoying what I really wanted to do (Figure Drawing, Photography, Computer Science — it was HTML, JavaScript and the dawn of the internet bubble!) I might’ve even signed up for a semester of Albanian and Sculpture 101, just to try my hands at other things. We won’t discuss what happened to the corpses of those two particular courses.

Alas — my cultural background compelled me to act upon my parents’ wishes, and I went to medical school at the ripe old age of 21, and got my M.D. by the time I was 25. People would ask me years later why I didn’t just “go against” my parents’ wishes and not go to medical school — I’d ask them to imagine being given the choice of going to Antarctica to live the rest of your life versus studying medicine for the next 8 years. Despite what many Asian American kids tell each other to about never discussing family values in their applications essays (lest they don’t get into Harvard — not enough personality for the admission team), being respectful of the wishes of the people who sacrifice so much of their lives for us is what makes us as human as the very American idea of pursuit of liberty, freedom, and happiness. Years later, I would come to find out the two concepts are not mutually exclusive.

Pediatrics — now Pediatrics was my own choice — and I had simply gotten lucky. I waffled between Radiology (dark room, but good lifestyle and money! And I liked looking at art — an ultrasound kind of looks like a concrete piece of abstract art?) and Surgery (I was — and still am — great with my hands; I learned how to sew at age 7.) Surgery seemed like the perfect arts and crafts specialty to me). But finally, I decided against Surgery because I really couldn’t imagine spending many years of my life having to develop that exquisite part of myself we can only so delicately label as “Dr. Bitch On Wheels” (although I still now occasionally wonder that our world actually needs more women physicians just like that). And I chose not to do Radiology because, frankly, my grades weren’t good enough to compete for the privilege of sitting in the dark (albeit with a really cool and up-to-date iPod playlist — this was when the iPod and the idea of personal playlist had just been invented!).

I chose Pediatrics because I knew I loved kids. My exposure to children — other than my very annoying baby sister that I had to learn to take care of at age 6 — was mostly some volunteer experience in college, and the then-tween sister who had become a very argumentative young lady (she’s now, of course, the lawyer).

What I didn’t know then was my active imagination and the fact I remember how I felt during EVERY stage of my childhood would so tremendously aid in the ability to do my job. It turned out that this uncanny ability allows me to put into words what my kids (my patients) are currently going through, so the adults in their life can stop worrying, or learn what to do. I also grew up with two brothers who have special needs — one with autism, and one with ADHD/ODD (he’s now the professor). And loving two people with those conditions gives me the rare lens of seeing such kids not through the pressing need to fix them, but with the pressing desire to advocate for them to live and enjoy life to the fullest extent in this oftentimes cruel and unaccepting world.

Over the years, I also learned to never have an ego around sick children and anxious parents — which helps tremendously in my practice of medicine. I try to remember to always listen, observe, and spend a little time to reflect, rather than fall into the trap of assuming I already know what’s going on, or that the parent is just being unreasonable. Because no matter what you had previously thought to be true — children (and occasionally, their parents) will ALWAYS set you straight, whether you birthed them or rounded on them:

Humility is not just a virtue in pediatrics (and medicine at large) — it is a basic and necessary condition for all of us who provide care to others.

Finally, the thing about Pediatrics is — I hold a very rare opportunity to be that one figure in a person’s life who can alter his or her course forever. I am an authority figure in the life of teenagers (individuals who are otherwise well known for their ability to use eye rolling and monosyllabic grunting as their main mode of communication) and I have their undivided attention for at least 10–15 minutes. Throughout the years, I have learned to maximally capitalize on that time I spend with them by talking to them about what I learned is truly important in life*.

When I meet adults in life who do amazing things despite the circumstances they grew up in, I often ask what set them off on the right path and take mental notes. Often I’d hear such stories as “my coach believed in me,” “my guidance counselor told me to apply to Stanford,” “my cousin told me about this aviation high school he applied to — so I went to the same high school; now I’m studying for my pilot license.” (All true stories)

When you trace your life backwards, there is almost always a pivotal point in your life, where one person said something to you at the right place, at the right time. And it clicks for you: it gives you a direction, a sense of purpose, a set of values. And that particular moment has the potential to be cemented in your life’s history forever as to set off a change in the direction of where you now are.

And I — as a primary care pediatrician — have that exact opportunity at least 5 times a day. For every well visit between the ages of 16–21 (yes, they still see their pediatrician) — I ask my kids, what do you want to do in life? I usually get their full and undivided attention at that point (if that doesn’t work — I then rope them in with, “hey, you want some medicine for those pimples?”) I then proceed to tell them what I think they need to know at that age. I tell them — you don’t need to know what you want to do the rest of your life. But your job right now is to figure out what you are good at, and what fulfills you. Those two things will change as you grow up — but your ability to know what drives you — that will always, always help you, whether today or 50 years from now. Essentially, I teach them the Socratic concept of “know thyself.”

Being able to shed light for even one person and set him or her on the right path at that age will never stop giving me tremendous fulfillment…. even when Pediatrics is always on the anchor end of physician income surveys. And this, I absolutely do NOT regret**.

*Yes, I know the AAP asks us to ask a million and one questions during the well check up; but suffering breeds innovation — I’ve learned to use Google forms and an iPad for all the inane questions, so I don’t have to waste my time. Plus, kids are much more frank when inputting into electronic devices than talking to their doctor.

**Yes, mom and dad, you guys were right about me being a doctor. I love you guys.