Inflation outpaced physician salary growth for nearly half of all medical specialties over the past five years, according to surveys of more than 160,000 full-time physicians on the Doximity network.

Average physician pay has increased steadily in recent years, including by 3.8% in 2021. Yet nagging price hikes and looming payment cuts have blunted this growth, frustrating many in the medical community. The still-rising inflation rate has concerned experts and weighed down the stock market. And the emergence of Omicron, a highly transmissible COVID-19 variant, has further complicated the issue, extending glaring supply chain and staffing deficiencies in the health care industry.

It Pays to Operate

The Doximity survey results, collected from 2017 through 2021, indicate that average physician compensation has gradually increased over the past five years, regardless of specialty or location.

Factoring in the average inflation rate (3.15%) over the same period, however, reduces the percentage of specialties with real growth down to 53%. The inflation rate is based on the Bureau of Labor Statistics consumer price index — a measure of changes in retail price for goods and services — which in December hit its largest annual increase (7%) in nearly four decades. Indeed, the past year’s inflation surge has effectively erased wage increases for large swaths of the American workforce, from hourly employees at large companies to dentists and lawyers.

Across the 10 medical specialties with the greatest average annual increase over the five-year period, nearly all were surgical. The top five included the following:

Take as a case comparison projected wage growth for general surgery (4.28%) versus internal medicine (3.29%) over the next 10 years. Should annual growth carry on at these rates, the difference in average pay could potentially be 67% more for general surgeons ($686,012) than internists ($409,081), substantially larger than the 52% difference reported in 2021.

Among myriad potential explanations include the greater number of procedures surgeons bill for, compared with PCPs; the much higher costs of those procedures; the greater collective representation for surgery on the RVS Update Committee; and the more extensive training requirements.

Pediatric subspecialties in particular have faced middling to low salary growth since 2017, with pediatric cardiology, pediatric infectious disease, pediatric endocrinology, and pediatric emergency medicine all well below inflation. Certain specialists such as emergency physicians (1.97%), pathologists (1.53%), hematologists/oncologists (1.09%), and endocrinologists (0.5%) also encountered subinflationary salary growth. For emergency medicine, underlying causes ranged from wage cuts and layoffs during the pandemic to worries over an impending surplus of physicians.

Average physician salary increased at all of the 44-plus metropolitan areas surveyed over the past five years. Areas boasting the strongest upward trend were well distributed across the country, with representation from all major regions: the Midwest — with Ohio hosting three such areas in Cincinnati (5.6%), Cleveland (4.6%), and Columbus (3.97%) — the East Coast with Philadelphia (4.4%), the West Coast with Sacramento (4.2%), and the South with Orlando (5.5%) and Houston (4.1%), among others. 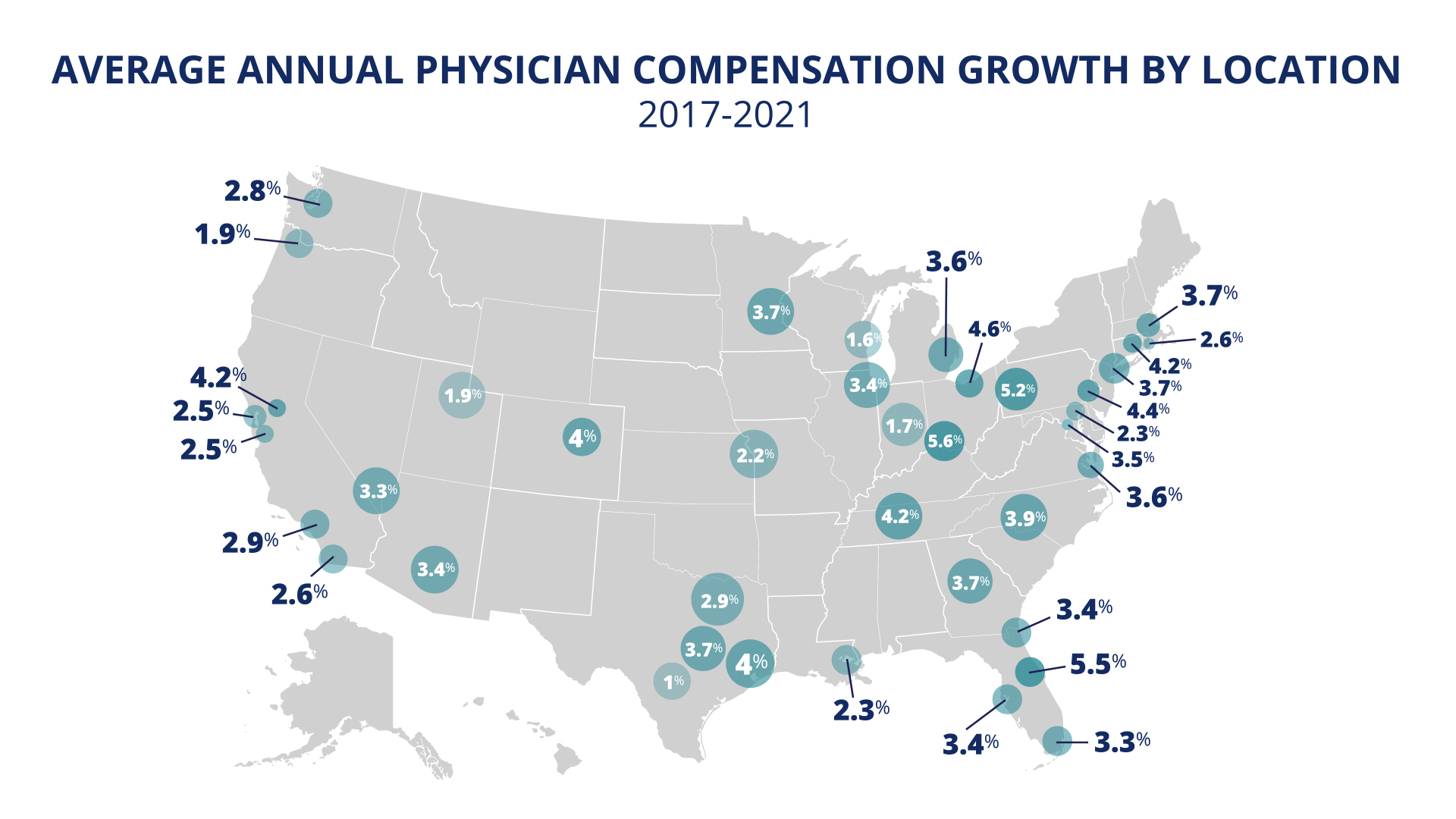 For the most populous metropolitan areas, salary growth ranged from as high as 4.4% in Philadelphia to as low as 2.5% in San Francisco-Oakland. Salary growth for most but not all of the major areas outpaced inflation, with Los Angeles being a notable outlier at 2.9%.

Out of the locations that experienced the least salary growth over the past five years, Milwaukee (1.6%) fell near the very bottom, though average physician salary in the city did manage to rank near the top in 2021 alone. (Compensation measures were not adjusted for cost of living.)

A striking exception to the trend was that posts at urgent care centers, usually on the lower end of the salary spectrum, maintained by far the largest salary growth from 2018 to 2021 at 8.1%. The sharp upswing for urgent care may stem from its growing role over the past several years. Urgent care visits had been on the rise well before the pandemic, a pattern reinforced recently by high demand for COVID-19-related care and the sudden need for assistance for overflowing EDs.

Though by no means an elixir for the abundance of stressors that beset physicians, average compensation has persistently climbed over the past half decade. But inflation, most of all in 2021, has rubbed out a significant portion of that growth, especially so for non-surgical specialties.

Still, recent efforts to increase access to COVID-19 testing and masks may alleviate some of the pandemic-related challenges and, in turn, help shore up the economy. In addition, a bipartisan bill recently signed into law, the “Protecting Medicare and American Farmers from Sequester Cuts Act,” has delayed and reduced a series of major Medicare payment reductions previously set to take effect on Jan. 1 of this year.

This decision by Congress marks a “move toward preserving the viability of physician practices and maintaining access to care,” Dr. Gerald Harmon, president of the American Medical Association, said in a statement.

Though mostly temporary by design, these and similar measures may bode well for the future health of the medical industry and could prop up compensation for the physicians who drive it forward.