'If I Let Her Keep Talking How Far Behind Was I Going to Get?' 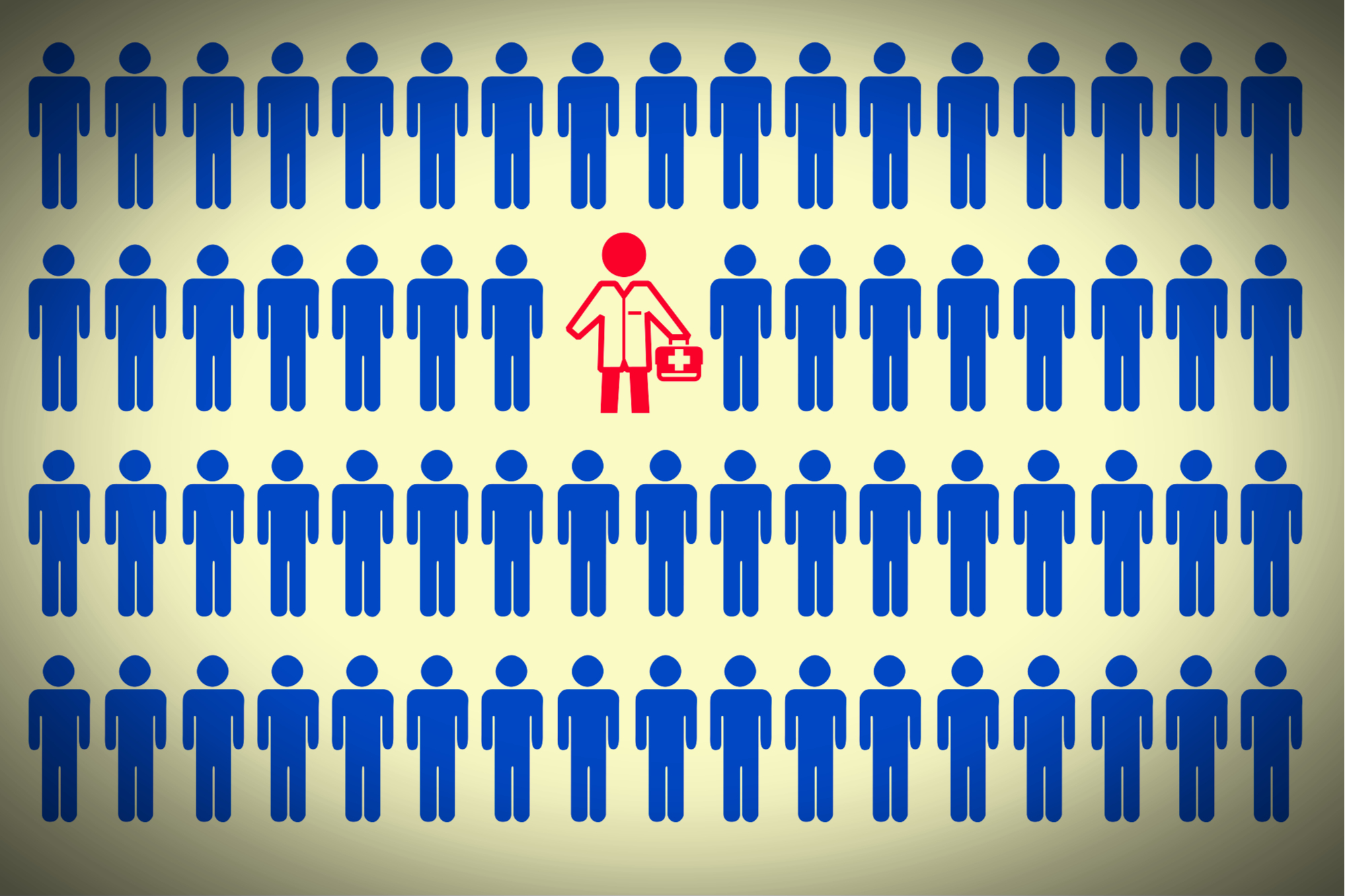 The term “moral injury” was first used to describe soldiers’ responses to their actions in war. It represents “perpetrating, failing to prevent, bearing witness to, or learning about acts that transgress deeply held moral beliefs and expectations.” Journalist Diane Silver describes it as “a deep soul wound that pierces a person’s identity, sense of morality, and relationship to society.”

Today I was reading a Facebook post today about physician’s schedules. I am a member of several forums of women in medicine and this popped up in one of those news feeds. The question was how many hours and how many patients per day were doctors seeing on average.

There were at least 50 comments by the time I read it, telling me that these doctors had some strong feelings about this topic. Reading through them was heartbreaking on many levels. Most stated they worked part time but the hours put in were still 50-60 per week. Patient loads were variable but almost all stated that they usually saw somewhere between 20-35 patients per day. A few were seeing 40 patients in a day.

The more I read the more disheartened I felt. The bare minimum of 20 patients per day per doctor. 20 different human interactions. 20 different people with pain, suffering, a variety of needs that you are there to meet. 20 people you have to smile and greet. And that’s lowballing it. Apparently more are seeing closer to 30 which is an enormous expense of energy for one person in a given day.

Beyond the actual experience of having to work at this pace (which is what my days typically look like as well) was the sheer normalcy of this type of schedule. Everyone who chimed in wrote their story very matter of factly and with resignation. I found only hints of cynicism, but mostly that sense of hopelessness on the part of most who shared.

I sat back and contemplated the lunacy of this. Women who had years of professional training forced to work to the point of exhaustion with no apparent recourse. I was witnessing a group of highly intelligent professionals expressing utter powerlessness in the face of ridiculous demands. Demands from whom? Certainly no one with any medical training would think that seeing this volume of patients was in any way beneficial to the patient, and certainly not the doctor.

This is a system that feeds on a high volume of sick people churning through the machinery, moving from specialist to procedure, to hospital stay, and the only way to keep the gears running smoothly is feeding a steady stream of patients through the gateway into the system, the primary care provider.

I thought of a recent experience I had with a patient. She was an elderly Japanese woman, in very good health, but had she fallen in the shower a few days prior. She had already seen her regular doctor but was still having some issues so was put on my schedule for a 15 minute visit.

I walked into the room, already running about 10 minutes behind schedule. She was very happy to see me and launched into her story. Instead of telling me what was happening that day she started from the beginning. An odyssey that had started a the prior week with a cardiac event that led to a hospital stay (including a procedure). The fall had occurred after she was discharged from the hospital, clearly a frightening experience. I could feel her need to share the entire story and knew that it was likely she was in the process of recovering from the fall, but traumatized by the event and the sense of frailty she was experiencing in its aftermath.

It was a compelling story which she shared in great detail. But it was taking a very long time and my mind raced. I did a series of calculations in my head. If I let her keep talking how far behind was I going to get. Who were my next few patients and how upset would they be at the wait? If I interrupted her retelling of the story what alternative steps would would be needed to reassure her that she was OK?

It was clear to me that what she really needed was to process the events. To have it heard and validated, and to have someone she respected (due to my training) listen to her and reassure her that what she was experiencing was part of a normal recovery from a fall.

If I had had the time to just sit with her and let her tell me everything she needed to say, I don’t think she would have needed anything more than that.

In that moment I made the decision to divert her from her process and truncated her story to what was happening that day. I knew that I was missing many important pieces but I made the choice to not fall far behind schedule in my day. I ended up ordering several tests on her so she could be reassured about the things that kept her up at night. I ordered these tests with certainty that they would be normal, but because I was rushing her she needed this extra reassurance.

These are the calculations I and most other physicians make on a daily basis. Some patients do actually only require 10-15 minutes but this is not the norm. Most show up with a “chief complaint” of back pain or headache but underlying this is depression, trauma, family crises. I think we all know this and we are in a constant moral dilemma. Do I ask the questions that I know will uncover what is really underlying their desire to seek help? Or, do I leave those questions on the table and focus only on the symptoms so I can write a prescription and move on to my next patient?

I am so numbed to these daily choices that I have failed to see its impact on my psyche. I have long known that I am a “burned out” physician but I really thought it was just the impossible amount of demands that are placed on me on a daily basis.

Now I can see that there are multiple layers to the sense of grief I feel over my work. Yes there are impossible and unreasonable demands which I daily fail to meet and this is upsetting. But there is also something deeper.

I went into medicine with a mission. My life’s work is to be a healer. It is not possible to be a true healer in the setting in which I have made my practice. Daily I look at patients who are asking for my help, help which I know how to give, and yet I deny them this care. Not because I don’t want to provide it, but I simply can’t. I don’t have the time and resources to do what I know is right.

I wonder about the toll that this is taking on me. To know that I have the capacity to bring someone relief from pain and suffering, to be driven by a mission to do so, and yet to deny them care and healing because I simply cannot figure out how to make it work in a system that requires me to see 20 people every day. No fatal blow but I do bleed more and more every day.

These injuries are taking a toll. I lost two colleagues in the last six months to suicide. Physicians are dying of suicide at alarming rates. We suffer from addiction, depression, and anxiety at levels far above the general population.

Many professions idealize workaholism. Physicians are certainly not the only profession to place high demands on its workforce. So why are we so much more likely to experience mental health problems and suicide?

I believe that the difference between physicians and other professions lies in this concept of moral injury. Burnout comes from overwork, but moral injury is the result of violating one’s internal moral compass on a daily basis. These may not be dramatic transgressions but they cause injury nonetheless.

It breaks my heart to see doctors continue to “soldier” on. Most of us entered this profession with an intact moral compass which always points us toward doing everything within our power to improve the lives of our patients.

According to Gandhi, one of the seven social sins is science without humanity. He stated that these are the things that will destroy humanity. Healing always takes time, it does not happen quickly. This is the human side of medicine and no amount of science can alter this natural phenomenon. We step out of our natural rhythm when we ask our bodies to heal overnight and we ask our physicians to heal us in 15 minutes. This is a disservice to our natural rhythms and strips both patient and physician of our humanity.

The Total Cost of All My Financial Mistakes? Even I Was Surprised

Navigating the Sea of Opportunity: Selecting Dual Degrees in Medicine

How One Group of Medical Students Is Addressing Local Health Disparities

This EM Physician-Financial Advisor Recommends All Physicians Read This Book