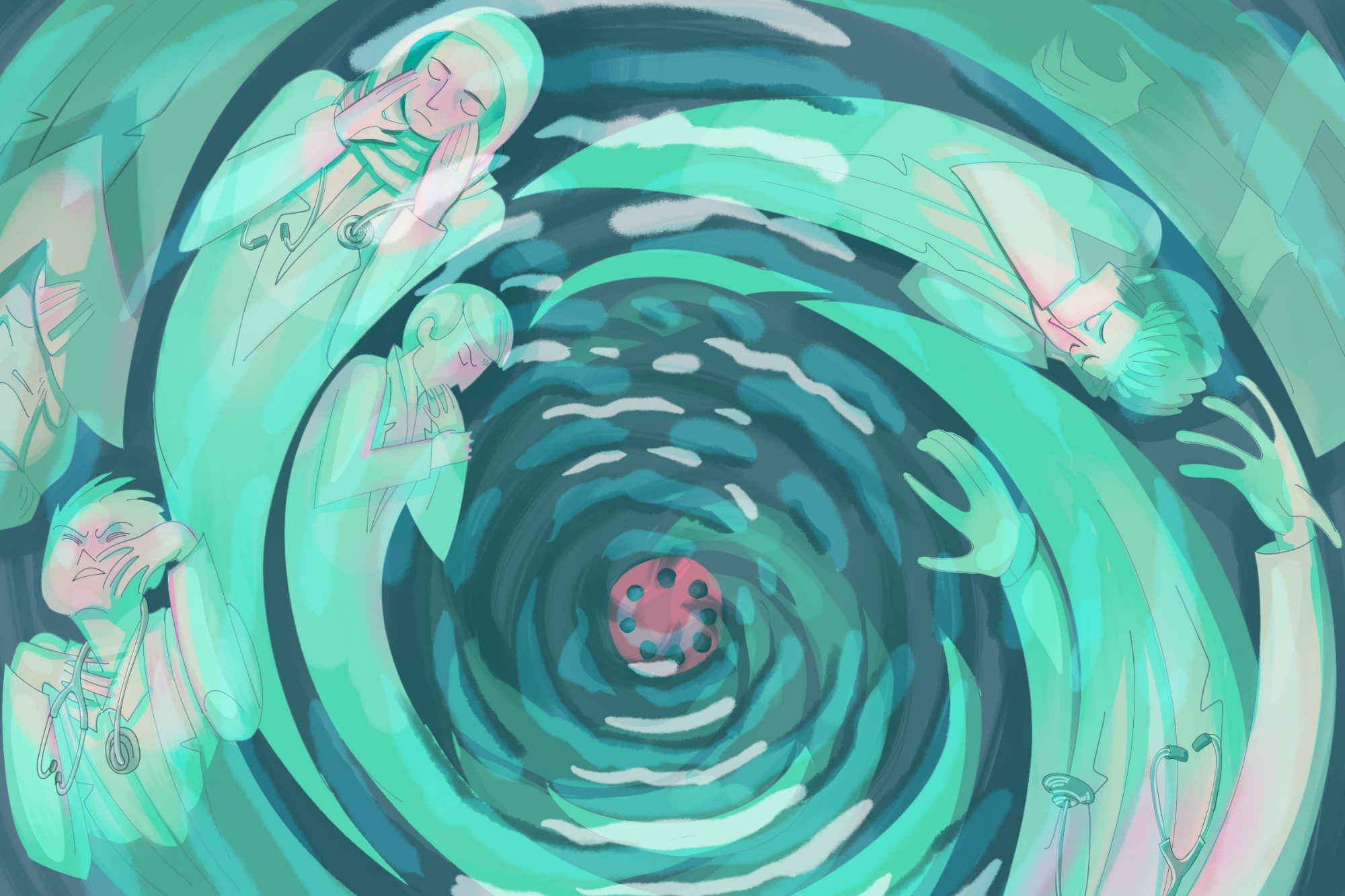 I just wished he would die so that I could get some sleep.

We were coding Mr. K for what seemed like hours but was probably closer to 30 minutes. He had had a heart attack a few days before and had since developed pneumonia. He had been extubated earlier in the day and seemed to be doing well. But in the middle of the night, his heart stopped, likely another heart attack due to the increased physiologic stress placed on it in the midst of his illness. I had been working for well over 20 hours at that point and had done similarly long shifts multiple times in the previous few weeks during the first months of my residency. I wasn’t able to regulate my sleep, which also meant that I was not able to regulate my mood or reasoning skills. I shudder to think of the mistakes I’m sure I made in such a condition.

Working on Mr. K’s lifeless body was too much for me that night. I had reached my limit. I wanted to cry and just sleep, sleep, sleep. I was shocked that I had such a thought about wanting him to die, but I didn’t deny that it was true; I just couldn’t function any longer.

Others have written here of experiences of hating patients, from figuratively throwing up their hands (and presumably giving up on their patients) to not having any emotional capacity left to deal with other people’s problems. So where is the line?

What was it about Mr. K that took me over the edge of fatigue to wishing for his death? How do we know when we are close to that line and how do we avoid crossing it? I, unfortunately, do not have a good answer.

We all have a breaking point, and part of the original theory of such intense medical training was to teach us to effectively function as physicians despite our personal needs. There is an unspoken (well, not always unspoken) edict that it is the intention of our cruel and unreasonable schedules to make sure that we all hit that spot multiple times, in order to learn how to deal with it. Every single one of us has reached that point before, but did we pass the test? Did we continue to focus on the patient even in the darkest hour of our soul?

Probably not. The very definition of a “breaking point” denotes that we cannot properly function in such an emotional context. Patients therefore suffer. Would I have intentionally done harm to Mr. K so as to end our efforts to save him? I sure hope not, but that doesn’t change the fact that I did want him to die. His survival would mean a transfer from the long-term acute care unit housed in the hospital back to the ICU, which would include a whole slew of orders, significant paperwork, keeping a close eye on his vent settings and lab values, and consults with multiple different specialists. Not only would I not be able to rest, but I’d probably have to stay after my fellow residents came to take my place to ensure everything was properly taken care of.

It was sad that I had reached my breaking point so quickly in my residency, and I was sure that it spelled doom for my prospects as a physician. The edge of my abyss is not the same as yours, just like yours is not the same as the next physician, and so on. I knew I was tired but I never would have guessed that I would feel the way I did about a patient.

I didn’t tell anyone about this for years. Despite having weekly group “therapy” sessions with all of the interns, I didn’t dare bring it up. I later learned that nearly every one of my resident colleagues had similar experiences. However, none of us knew it was coming, even though the vast majority of doctors experience it. We need to prepare our learners for the extreme negative emotions and disturbing thoughts that will come during training, whether invited or not.

Everyone will hit their breaking point, in one way or another, both in residency and once in practice. This shouldn’t deter us from pursuing a career in medicine, but proper expectations need to be presented ahead of time. In so many ways, the positives of being a physician outweigh the negative, but I could have handled my experience so much better if I had known it was coming.

Despite being able to lie down after we ended our efforts to revive Mr. K, I couldn’t get any sleep.

Dr. Kyle Bradford Jones is a board-certified family physician at the University of Utah School of Medicine. He practices at the Neurobehavior HOME Program, a patient-centered medical home for individuals with developmental disabilities. He is very interested in how technology and social media can be used to improve overall health and clinical care. Dr. Jones is a 2018–2019 Doximity Author.