How Old Are You in 'Doc Years'? 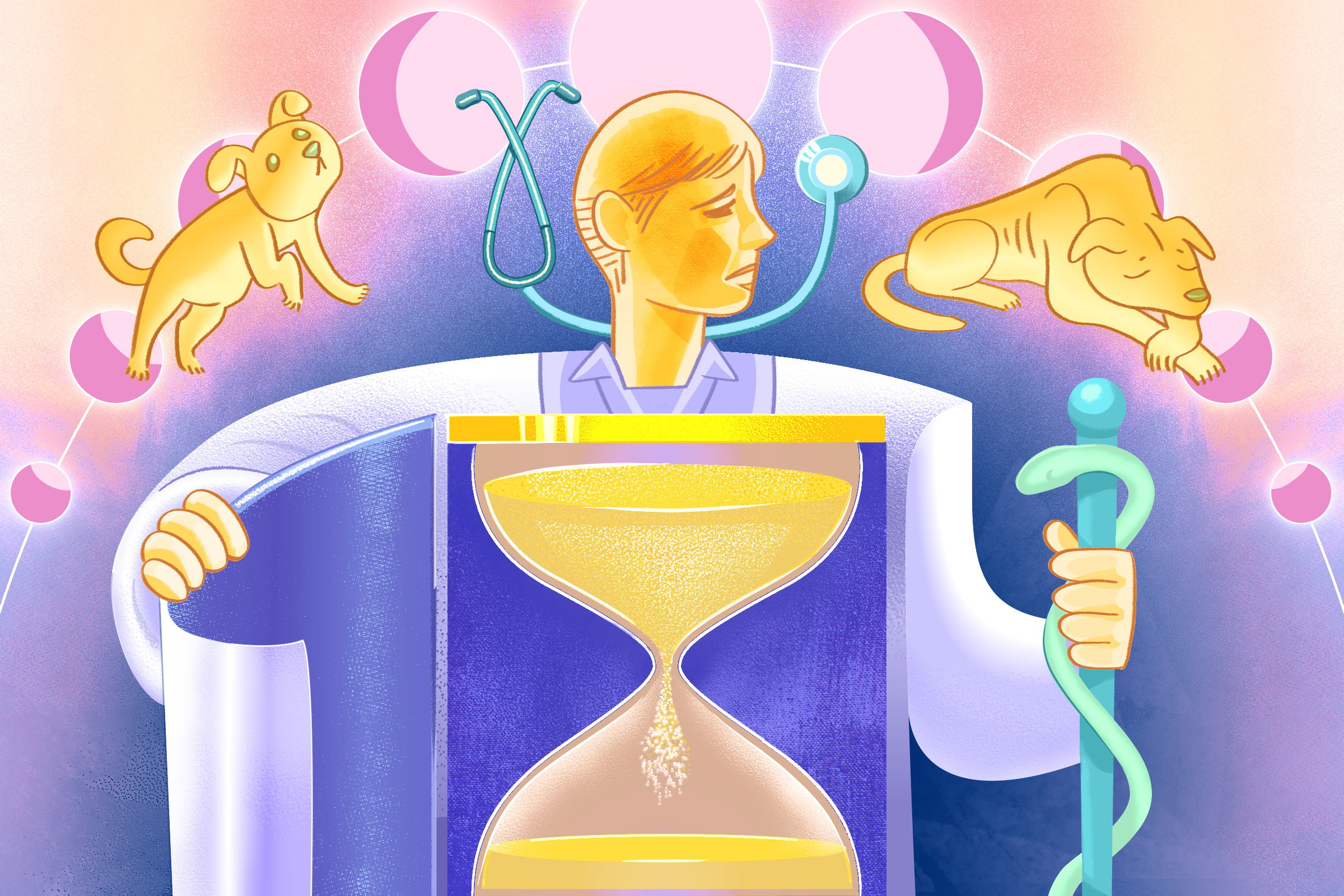 We should be aware, as we meander through the sultry doldrums, that the term “dog days” was originally coined by Hippocrates. He was referring to the cyclic rise in illness and deaths that occurred in the late Grecian summer and ascribed this seasonal increase in morbidity and mortality to the celestial influence of the Dog Star (Sirius, in the constellation Canis Majoris), the brightest star in the night sky. It was actually the lethal combination of mosquitoes and parasitic plasmodia that was responsible but neither vector nor pathogen was understood as such at the time.

Physicians of a certain age will recall that canine imagery was part of housestaff lore and lingo. When dinosaurs roamed the earth and the idea of work-hour restrictions was unfathomable, it was not uncommon to find oneself routinely designated as the “call dog” or, worse, the “scut puppy.” For a lot of us, almost every day was a dog day.

Sitting one night with my wife and our beloved canine companion, a five-year old male Vizsla named Blaze, I pondered his chronological age and made the usual seven-for-one calculation, placing him at healthy early-to-mid-adulthood. Given the variable and the differential, I concluded that he and I would soon, and synchronously, be “old dogs” together. Though I just retired after 30 years as a cardiac surgeon, I was often asked about my age. I am, in strict Julian chronometry, 64. And while that answer is correct in the narrow, arrow-of-time sense, it does not really tell the whole story. It occurs to me that due to the nature of medical practice, we physicians, scut puppies and call dogs probably do not age at a constant 1:1 rate. If we’re going to accept the idea of dog years then maybe we need a new metric for healers:

So, submitted for your approval and lacking any substantive scientific basis whatsoever, I offer Doc-Years as a real-world assessment of the market price of a life in medicine and an estimate of the temporal taxes paid along the way.

First, a couple of baseline assumptions:

Now that we agree that everyone toes the Starting Line at the same spot, I propose the following adjustments to our mortal coil epochs:

I did say no extra points for specialization, but the length of time required to train in some branches of medicine deserves recognition.

If you miraculously graduated with no medical school debt to your name, it won't be hanging over your shoulder for the next several years. It doesn't matter how hard you worked prior to graduation to get it down to nothing — it's gone. Meanwhile, if you're like the majority, saddled with tens if not hundreds of thousands of dollars of debt that will follow you for the next decade of your life or longer, add accordingly.

Training programs may have tight restrictions on how long you can work or how much sleep you can be deprived of but the real world does not. Call is what wears down the tread on your tires — so adjust your mileage appropriately. And, oh yeah, there is no spare.

Physicians, by nature, crave autonomy. We are educated and trained to be independent thinkers; to evaluate, cogitate, ratiocinate, and then make decisions, most of them difficult and often critical. The quantity of misery is proportional to the degree that this hard-won autonomy is taken away. We all have undergraduate and medical doctoral degrees. Many of us have additional Master’s degrees or even PhD’s, plus years of intense post-graduate training and real-world experience. Having decisions made for us by individuals with far less education, training and experience is more than a bitter pill. Worse yet is the PINO, often a physician who feels compelled to find fault or who sees fit to pass judgment on those who are actually taking care of the patients. Ten years is probably a lowball estimate on that one.

EHR may well be, as R.E.M. sang, “The End of the World As We Know It,” eliminating nuanced and thoughtful assessments and replacing them with drop-down menus, cut-and-paste notes, and comically mangled Voice Recognition dictations. No one feels fine about this one.

We are descended from a long line of teachers and it should never be a burden. It makes us smarter; it makes us better at what we do. It is the one legacy we all can leave. It is truly its own reward.

You could argue that any or all of these suggestions are capricious, subjective and arbitrary. They are. But we need to start somewhere.

The stresses of providing modern medical care are incredible, whether you’ve been at it for a professional lifetime or whether you’re just starting out. Physicians are burning (sometimes flaming) out at an alarming rate, not because of the patients and their problems, but because the milieu has become toxic, actively vacuuming the joy out of every aspect of what is, for most of us, not just a career but a calling. As medical practices become increasingly dominated by Health Care Accountants, we become less of the dear and glorious physician and more of the monetized medical commodity, judged solely by our “Work RVUs” and our latest satisfaction scores. Too often, we’re not even doctors anymore, merely one of the rabble of “providers” — walking, talking dollar signs that flash either red or black on the scintillating computer spreadsheets of business school graduates and personnel managers who’ve never had to comfort a grieving spouse, hold a dying child, or try to stop the blood that’s coming out so fast it makes a sound.

It doesn’t have to be this way.

We don’t have to stand by and watch doctors burn out, commit suicide or abandon their careers in frustration and despair. We don’t have to accept the professional equivalent of progeria. We can find ways to subtract those years from our age and add them to our careers by refusing to cede health care to finance majors, middle managers, and their meddling minions.

We are a community of healers and the health care system is ill – so who better to treat it than us? It’s an old maxim that happy people live longer. Medical practice today so often imposes a chronic unhappiness – but fortunately for us, not an incurable one. Most of the items on my list are malleable, changeable. This is our profession, our business. Let’s start actively reducing the things that age us prematurely and focus instead on those which sustain us. And in case you’re wondering, I did do the math on my own career. Without going into numerical details, let’s just say Methuselah is looking over his shoulder.

I suspect that at this point Neil Young would posit that, all things considered, it’s probably better to rust. So let’s put ourselves back in charge. The Father of Western Medicine got it wrong and we must not make the same mistake. To paraphrase Cassius in Shakespeare’s “Julius Caesar,” if we don’t want to be underlings, if we want to take back medical care, if we want to have longer, better careers, then that opportunity, dear colleagues, is not in our stars, but in ourselves.