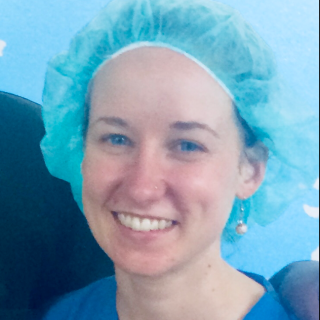 It is a hot day in Ethiopia; dust hangs in the air. Aster awaits her surgery suspended somewhere between anxiety and ambivalence- she believes her fate is in the hands of God now. The pre-op area is a simple room, filled with bare rubber-coated mattresses, off to the side of the operating theatres. On one side is a closet that serves as the changing area for the OR staff. The patients and families stare as I leave this room the color of my skin sets me apart despite wearing the same blue scrubs as my colleagues.

I’ve been working in this Ethiopian Referral Hospital for several weeks now, the largest facility in the region, but with four general surgeons for a population of seven million there is never enough to go around. This was my home as a Peace Corps Volunteer many years ago but I now see Dessie in a new light. As a rotating medical student we round on post-operative patients crowded eight to a room, holding scratched and bent X-ray films up to light streaming through the window and laboratory results delivered on scraps of paper, rather than the rolling computers I’m used to at home. We operate on a range of maladies, most of which present at much more advanced stages than I have seen before, and Aster is no exception.

Aster traveled 6 hours from her hometown to Dessie by early-morning bus to the surgery clinic. The surgeon scribbled a list of supplies she must purchase: plastic sheet to cover the operating table, suture, anesthesia medications, IV fluids, sterile gloves, and antibiotics. The surgery is free of charge but the supplies are not. Once everything is prepared she is called to the door of the operating theatre.

She has stripped naked and is wrapped in a red plaid wool blanket- the cheapest kind at the market. The mass we will remove bulges from her neck. Like an animal, it has taken hold and clings on to choke her.

At the door, she shuffles into the OR shoes designated for patients. This ancient pair of white clogs is stained by years of use. The plastic sheet is taken out of her box of supplies and ripped in half so it covers the table; she climbs on. Her hair smells thickly of kibey — the local spiced butter women rub into their hair before holidays and special occasions. It is a rich smell, almost sickening, and a reminder that she came from a rural village where traditions are still strong.

The anesthetist begins to place the telemetry leads — there are no foam pads, just leads held in place with tape over lubricated skin. He grabs an endotracheal tube from the drying rack in the corner — supplies here are repurposed, recycled, until they cannot be used anymore.

A towel is placed under her shoulders to elevate the operative field and the mass seems to take over and spill from the sides of her neck; engorged vessels protrude and pulsate from the smooth silhouette. It is prepped with alcohol and we drape the patient with a less tattered version of the cloth that wraps her hair. Now it is just the goiter and us.

The case moves quickly. As the thyroid begins to spill out, we see the engorged vessels feeding the tumor. It is delivered like a child, popping out of its womb once no longer tethered to its base. Then, suddenly, the tone in the room changes.

There is rapid bleeding, welling up and filling the void where the goiter had been. I momentarily wonder why we haven’t used cautery, and remember there is none in this hospital. The bleeding seems to come from everywhere and nowhere. The surgeon throws clamp after clamp onto the tissue, searching for the source by process of elimination. The surgical field is a sea of clamps and blood. The suction is turned on as an afterthought. Its meager slurping barely makes a dent in stemming the endless wave. My novice is glaringly apparent. The surgeon remains calm and systematically ties off vessels one by one. He does not glance up, and remarks to the anesthetist, “call for blood,” as though ordering an afternoon cup of tea. He is not shaken by the chaos I perceive in the room- he does not have the luxury of calling for assistance. Slowly the army of clamps and mosquitos recedes in military fashion: stitch, tie, off, cut, stitch, tie, off, cut. We have dammed the flood.

Closing the skin, the cheap needle bends after a few passes, now shaped like a W instead of a C. I look down at Aster. For a moment it’s as if the bleeding had never occurred. But when we take the drapes down the evidence is everywhere. Her braids are thick and matted with clotted blood. She is coming to and begins to stir on the table.

This is typical of surgery in Ethiopia — an endless line of Asters with huge goiters, hernias gone far too long without repair, elderly women with perforated stomach ulcers who come to the hospital too late to be saved. Surgeons who are talented and well trained but overworked and too few in number. Limited equipment in the operating room and in the post-operative wards prohibits more complicated procedures. There are no ventilators for patients, no vital signs monitors, and few of the medications commonly used for critically ill patients. But still, Aster got a good operation today. She will be fine, and would have been treated essentially the same way in the United States. It is not the skill or knowledge, but access and resources that are the trouble. Four operating rooms, four surgeons, with seven million people depending on them for surgery when it is necessary.

Aster moves to another stretcher and is wrapped in her blanket from home. Mops and buckets of bleach solution are brought out, and the next patient is called to the door.

Nichole Starr, MD is currently a PGY-3 general surgery resident at University of California, San Francisco. She served in Peace Corps/Ethiopia from 2007–2009 and received her M.D. and M.P.H. degrees from Boston University. She has clinical interests in trauma/critical care and global surgery, and will return to Ethiopia in July for her research fellowship. All names have been changed for patient confidentiality.