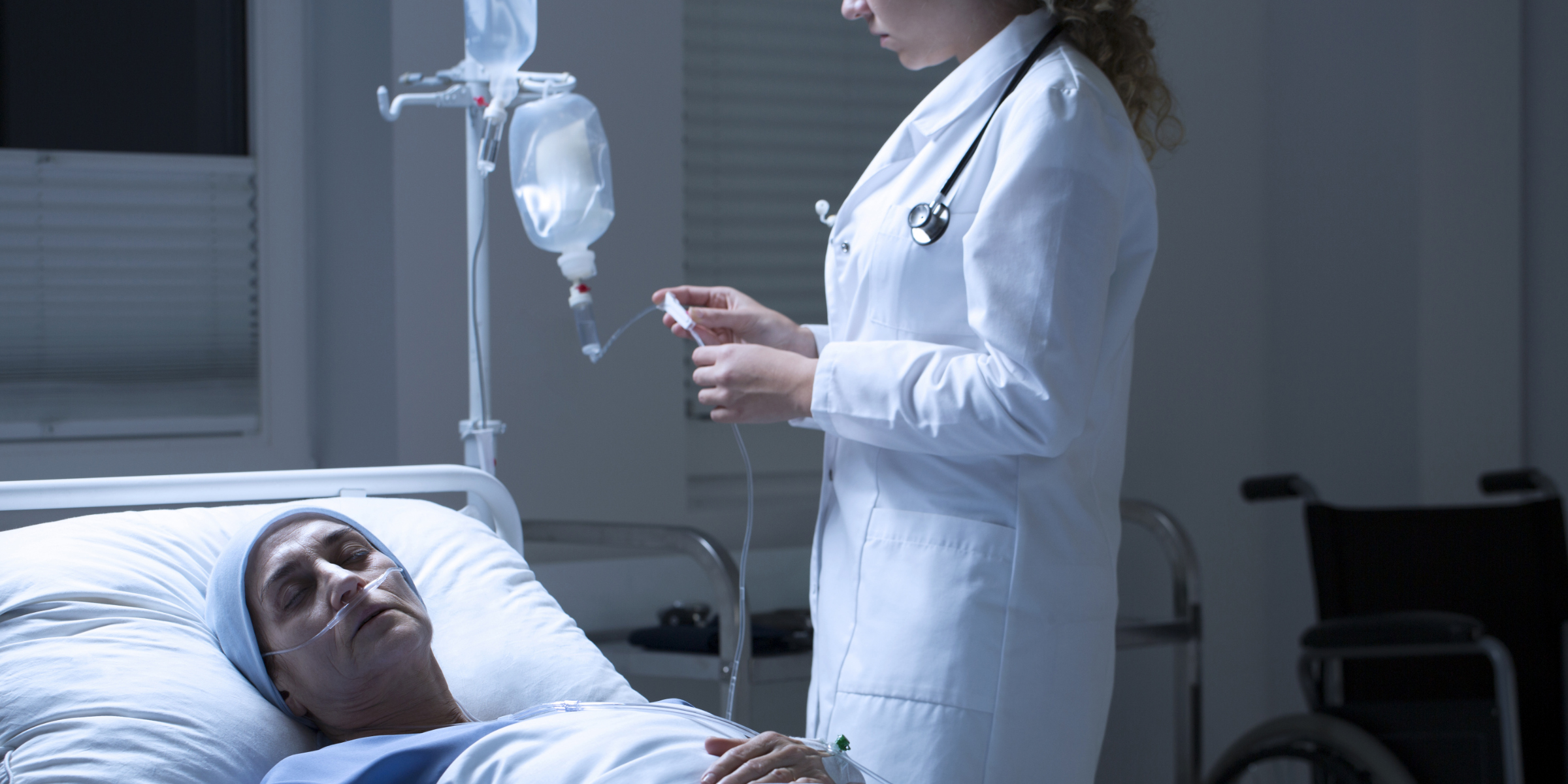 Oncologists are often asked our motivation for entering the specialty. My standard response is to smile, and state that I followed a calling. But to explain that calling is a longer story that I’ve never shared. Twenty years later, here is my first attempt to do so.

It was the year 2000, and I was assigned to the Bone Marrow Transplant Service for my second rotation of internal medicine internship. The first patient I pre-rounded on was nauseated and exhausted, and the medications weren’t helping. I remained at the bedside because I didn’t know what to do other than listen. Before I knew it, the hour was up, and it was time for rounds with the attending. There were five other patients to pre-round on that I hadn’t even seen.

I broke out in a sweat. It was too late to grab the other (paper) charts. There was nothing I could do at that point but show up. I clutched my painstakingly-written index cards.

The other intern went first. He gave a flawless recitation of his patients’ data, without even seeming to need to breathe.

My turn. I hesitated, but I’d never been a bluffer. Nothing to do but blurt out the truth to the attending. “I’m sorry, I only saw one patient.”

The senior resident’s jaw hit the floor. I avoided looking at her. I’d violated a cardinal rule — I’d let down the team.

The attending lifted his eyes from his notepad and asked in a mild voice, “Which one?”

It took me a few seconds to realize he was asking which patient. I spoke her name.

“Why?” The attending’s tone seemed curious, not disparaging.

I stammered something about how lonely she’d seemed, in the depths of her illness.

OK? My heart lifted. I was more than OK. I felt the first glimmer, the one that told me maybe I’d found my people.

The senior resident scurried to get the rest of the charts.

The next morning, I doubled my time to pre-round, our team synced well, and the month proceeded to fly by.

Until the last week. We admitted an 18-year-old woman with relapsed leukemia. I could not yet know that she would be the only patient from my intern year whose name I would recall for the rest of my life. Here, I will call her Jane.

Jane was alopecic and pale to the point of translucency, and when I entered to pre-round, she was asleep. Her frail chest moved the bedsheet by an infinitesimal fraction. Her mother stepped forward from the bedside like a rising storm. I halted.

At 26, I was only eight years Jane’s senior, an uncomfortable fact I didn’t want to dwell on. I couldn’t conceive of letting down my team again, and therefore, I had to get my pre-rounding data.

But Jane’s mother continued to bar the way, arms crossed. Weariness suffused her face, but her eyes signaled her intention to keep me from getting to her daughter. Instinct told me not to try.

I found myself saying something unplanned and un-doctor-like. I’m supposed to examine her and find out how her night went and get her vital signs and stuff. I’m sorry. I’m the intern.

Maybe it was my honesty or my youth — whatever it was, Jane’s mother and I came to an agreement. She would answer my questions if I agreed not to awaken Jane. I took the deal.

And so, every morning for that last week of the rotation, I tiptoed into Jane’s room and took down the information whispered by her mother. I kept my end of the bargain and left Jane undisturbed. It might have been my imagination, but Jane’s mom seemed a bit less hostile to me each day.

In a lie of omission, I never told the senior resident, the fellow, or the attending that I wasn’t examining Jane before rounds. I presented to the team what Jane’s mom reported each morning. Jane didn’t eat dinner or she did. She slept or she didn’t. She was breathing clearly or she wasn’t. I recited her numbers, the litany of vital signs, and blood counts. The team then examined her together on rounds. Jane’s mom hovered nearby, mouth compressed into a grim line, knowing she’d reached her limits of control. I didn’t notice that the senior resident, the fellow, the attending were only going through the motions.

Because even though I was Jane’s intern, and I’d had my medical degree for almost two entire months by then, I didn’t grasp the full picture.

Oh, I understood she’d relapsed. And that she’d already had two prior bone marrow transplants. But I believed in science. I expected she’d be offered a new protocol. Or another transplant, a new donor. I wasn’t worried, because I trusted the attending had a plan. My job was only to bring him the data each morning. I couldn’t see the forest for the trees.

At the end of the week, on the last day of the rotation, I was thus unprepared when the attending, the fellow, and the senior resident matter-of-factly discussed the plan for Jane. Hospice.

I held myself very still. The senior resident told me she'd take over Jane’s discharge planning. Later, I would realize the resident thought she was sparing me from something, that she was doing me a kindness. But it didn’t feel like kindness. It felt like shame.

How were they not talking about this? The impending death of this child, who was only there on the adult unit in the same way that I was there as a doctor — we each met the minimum requirements for the title but had none of the lived experiences to embody the role. And now, she never would.

Later, I spied the attending. He sat alone, paper charts strewn about the table. The overhead light shone down, highlighting him in a halo of white light. The bustle of the daytime activity on the unit had given way to the quiet that evening could sometimes bring in the hospital, on good nights. But this could not be a good night. Kids weren’t supposed to die. Doctors weren’t supposed to let them. They didn’t send 18-year-olds home on hospice to die.

It was the first time I’d spoken to the attending outside of rounds, and I waited until he glanced up to acknowledge me. I didn’t want him to think less of me for not understanding, but I had to ask the question. “There’s something else, another treatment, right?”

He held my gaze and delivered the words in a firm but kind voice. “There is nothing else. I’m sorry.”

Something about the way he said it let me know that he, too, wished more than anything for something else. For another treatment. But he carried the awful knowledge that there wasn’t. And the more awful responsibility of having to be the one to make that final decision. I hadn’t been there when he’d told Jane’s mother, but I knew he would have been the one to deliver the news. I had a flash of understanding that he had not only accepted this burden, but chosen it.

All of this hit me in that brief moment. For the first time, I thought about the courage it would require to be the one to say those words, and the humanity necessary to deliver them. That it wasn’t callousness that allowed doctors to own this responsibility, it was the opposite — perhaps, even, the doctors who cared the most. It struck me that, once upon a time, my attending might have had a morning when he spent his entire pre-rounding time on one single patient, because he, too, couldn’t bear to leave a patient alone.

The world tilted around me. I headed for the nearest door, not caring what room it was, and closed it behind me. There was a mop in the corner. Hiding in the housekeeping closet seemed a cliché that couldn’t be real. But the reality outside of the closet was worse, so I stayed. When I crept back out (hours or minutes or seconds later), the attending was gone, and the one nurse remaining was kind enough to pretend that she didn’t know where I’d been, or notice my tear-stained face.

The next day I started a new rotation.

But I remembered, always, how the attending answered my question. And when I became an oncologist, every time I was in a position to deliver the same words, I tried to manifest the way he said it. Without flinching, without caveat, without hesitation, without dissembling. Instead, with directness, with honesty, with truth, with mercy. With grace, for the things that are beyond our control.

And whenever someone asks me why I decided to become an oncologist (why would anyone do that?), I mumble something about answering a calling. Because there’s no short answer suitable for a dinner party conversation to explain that moment when I was called to serve — to become a bearer of safe and sacred space for our fellow human beings in their time of need.