Looking in the Mirror

If you want to see beautiful butterflies, Belize has many varieties: the Juno Heliconian; Turquoise-spotted navy eight-eight; Frosted Flasher; and, my favorite, the blue morpho. Like any curious mind, I wondered how the blue morpho, for example, acquired its iridescent blue. I was surprised to learn that, like humans — who have melanin pigments — butterflies have chemical pigments that absorb certain wavelengths of light and reflect others.

What we see are the reflected wavelengths, multi-layered reflections from the tiny scales of the butterfly shimmering brightly in spectral colors. This only happens under conditions of light and warmth; take away the light and cool the environment, and you have butterflies with dull wings.

Just as habitats influence the hue of butterflies, environments shape humans too. There is a reason why the world’s most dominant marathoners come from East Africa and why Silicon Valley leads in technological innovation. Environments matter. And for better or worse, our self-identities tend to be deeply rooted in and influenced by the social spaces we inhabit. It follows then that our behaviors are often byproducts of our social environments.

With that in mind, let us turn our attention to the medical training environment. To become physicians, we undergo a rigorous acculturation experience involving learning a new medical language, imbibing new norms, and following certain rules. In the beginning, it’s not clear to us what exactly our role is as medical students, but we’re fascinated by everything: the marvelous intricacies of the human body, the rapid pace of medical breakthroughs, and the transformative power of medicine to save lives.

We are driven, compassionate, and empathetic. Our enthusiasm is indomitable; no challenge is ever too big for us to overcome. But as we go further along in training, something inside us changes. We get hardened. And for some of us, the wells of our enthusiasm dry up. What used to be an oasis of joy, confidence, and courage, becomes a desert of sadness, fear, and anxiety. Slowly, the fires that burn within us turn to ashes, leaving behind embers of what used to be our raw idealism.

We look in the mirror, searching for the face that once dreamt of the impossible, but all we see now are shadows of ourselves. Feeling like prisoners trapped in a cave with no way out, we are left to wonder: what happened to us, how did we get to this point?

Effects of the Training Environment

Chances are that this inexplicable feeling of loss of the self has happened to you or someone you know at one point or another in the course of medical training. While it may be true that some physicians make it through medical training unscathed, many leave with ineffaceable hurts. Failing to tend to these wounds results in an unhealthy cycle where hurt begets hurt.

Before I started clinical rotations, we were told about studies highlighting the erosion of empathy during the clinical years (1, 2). Forewarned, I steeled my resolved not to succumb to the Stygian forces of the medical wards; nothing was going to steal my joy.

A few rotations later, the stresses of the wards, sleep deprivation, physical and emotional exhaustion proved themselves equal to the task of testing my mettle. I discovered subcultures of doers vs. thinkers, listeners vs. talkers, sweet angels vs. mean spirits, all vying to leave their imprints on my undifferentiated path.

Although I encountered exemplary hospital staff, who modeled compassion with clinical mastery and served as role models, others showed behaviors that even then I felt were contrary to the ethos of medicine. In speaking with my peers, many reported witnessing and experiencing tiny little indignities on the wards — various isms, humiliations, and misconducts — which, in aggregate, broke down their humanity.

The pervasiveness of these reports and the devastating effect on trainees gave me pause to think about the culture of medical training. There seemed to be a dissonance between the ideals espoused by the profession versus the milieu in which we train our would-be healers. Studies evaluating this phenomenon suggest that negative aspects of the training experience, rather than pre-existing vulnerabilities or mental health issues, generate long-lasting emotional and psychological distress among trainees (3, 4).

In other words, without an environment to shine a light on their humanity and to nurture their skills and talents, some trainees emerge from their cocoons as dull butterflies, their brilliance now lost forever in the ether. For the less fortunate, whose wings get clipped during training, they will never fly again.

Related to the above, my brush with the medical culture at three different academic institutions underscores a consistent observation: the design of the clinical learning and training environment strongly impacts how we interact with it.

For instance, the siloed structure of some institutions where I’ve trained meant less-fluid interdisciplinary collaboration; whereas others with a more relaxed atmosphere fostered better faculty-student interactions and made for an enriching experience. In contrast, at institutions where faculty had attained demigod-like status, the primary emotion in the learning environment was fear. In such a place, meaningful learning is almost impossible.

Along those lines, consider a study performed at Yale by Stanley Milligram in the 1960s. He conducted an experiment exploring human behavior in a setting where participants’ moral values conflicted with obedience to an authority figure. When the environment allowed it, the average person was willing to apply lethal levels of electric shock to another human being, just because a man in a white coat instructed them to do so.

Although Milgram’s experiment shed light on a dark aspect of human nature — our potential for evil when we forfeit our moral agency — the good news is that some environments do fuel the good in us, prompting us to strive to become the best version of ourselves. The corollary of this is that some settings engender the opposite behavior.

So what does this all have to do with medical training?

Moral Agency and Flipping the Script

Everyone who has been through the medical system has at some point struggled with the inherent asymmetry of power. We experience the continuous disharmony between explicit values espoused by the profession versus the implicit behaviors that belie a true commitment to those values. We feel caught up in a larger culture that expects more but gives less.

The whole system appears to be designed in a way to mimic a Milligram-esque tragedy of sorts, only this time we apply the shock to ourselves. As we go through training, we learn the language of silence in the face of injustices and various –isms, muzzling the voice of our conscience to the point where it eventually becomes a distant whisper.

In such an environment, it seems one antidote to losing one’s self is to be intentional about a daily exercise of moral agency. Absent this and other conscious strategies to stay focused on what drew us to medicine in the first place, we run the risk of becoming automatons, simply following orders without understanding why or what we are doing.

One common piece of advice which echoes in the halls of training is this: ‘keep your head down.’ Undoubtedly, this is well-intentioned advice. At the beginning of training, interns are presumably the least knowledgeable and clinically skilled members of the team. It is anticipated then that over the course of training, this state of ignorance will be replaced with some level of knowledge and clinical expertise.

If we are lucky, we graduate from training and move on to our careers, forever keeping our head down, but never learning to question the status quo. Having sublet our moral autonomy, we discover rather too late that we must now live by the mandates of doctoring established by others. Any wonder then why we feel disillusioned?

In many ways, a well-intentioned admonishment becomes a failure of true education. We fail to learn to ask the right questions and challenge foregone conclusions. Medical training fails at a basic task of modeling for trainees, who will become future educators, how and when to appropriately question authority.

Words do matter and shape how we behave. So consider then, what would happen if we flipped the script? Rather than telling trainees to ‘keep your head down,’ how about we tell them instead to have a good head on your shoulders, prick up your ears, and keep your eyes wide open. Speak up when you feel uncomfortable. We are counting on you.

When the Light Illuminates

Which brings us back to those beautiful butterflies. In some ways, throughout medical training we are like butterflies. We start out as undifferentiated eggs, and along the way branch out as pupae into different specialties. Becoming a doctor is a long metamorphosis and the early stages strongly influence the outcome.

We can only reach our true potential if we are immersed in training environments where the light shines to bring out the radiance in all of us. This means that our training systems need to focus on building supportive communities, which allow physicians to grow and inspires doctors to become better.

Beyond mental health screenings, wellness, and resilience-building programs, we need to perhaps reconsider our thinking on the root causes of disillusionment among trainees and practicing physicians. My experience at the frontlines indicates to me that it is time to seriously reexamine loss of moral agency and the training conditions within the current system, which is no longer tenable.

If the ultimate aim of medical training is to produce emotionally healthy and humane clinicians who are skilled in their craft, unconventional thinkers, and innovators who find fulfillment in the call to combat illness and to relieve human suffering, then the solution may lie in building new medical cultures and working environments, which value human flourishing.

This may mean reengineering the social and cultural architecture of training to reflect the things that we truly value: human connection and human dignity. Rather than a setting that feeds our anxieties, insecurities, and fears, what if we designed a system that allowed physicians and our patients to thrive? Imagine how much more brightly we would all shine in our own little corners of medicine, how many more beautiful butterflies — trainees — will emerge to transform medicine as we know it.

Charles A. Odonkor, MD, began his love affair with medicine at Yale, trained in Physiatry at Johns Hopkins, and is now a fellow at Stanford. He enjoys traveling, cooking, and spending quality time with his wife. He is a Doximity Scholar, blogs at BiomedicalOdyssey and tweets @kcodonkorGH.

Read How I Beat Burnout 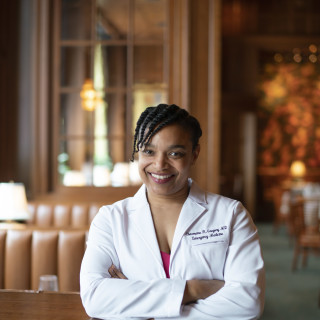 Read The Pygmalion Effect Doesn’t End in the Classroom

Nov 13, 2017 Link to The Pygmalion Effect Doesn’t End in the Classroom

Read Is Our Approach to Trainee Selection Outdated?

Is Our Approach to Trainee Selection Outdated?

Jun 24, 2019 Link to Is Our Approach to Trainee Selection Outdated?